he Fall/Winter 2020 issue of Lakeside magazine explores how Lakeside students, staff, faculty, and alumni are responding to the difficult challenge of the global pandemic. Included in the issue is a shout-out to 15 Lakeside alumni doing essential work in fighting the spread of the virus. Their stories add to those of the “fast-responders” highlighted in the class notes section of last issue. Those contributions of wisdom, compassion, and leadership represent the best of a Lakeside education — and embody the school’s mission.

The cover image is cropped from a self-portrait shot for a class assignment last spring by Siddarth Hathi ’20. The striking image earned third place in the portrait category of the 2020 Washington State Photography Contest. Hathi was one 13 Lakeside students who received top honors, leading the school to its first championship in that competition since 2013. You can read more about the contest and see a slide show of winning entries here.

We’ve featured a poem in this issue by Deborah Bacharach ’84, P ’20. Deborah, the author of the forthcoming collection “Shake and Tremor” (Grayson Books, 2021), received an honorable mention for the 2020 Pushcart Prize.

Her work has been published in journals such as The Adroit Journal, Poetry Ireland Review, Vallum, The Carolina Quarterly, and The Southampton Review, among others. In addition to “Sophomore English,” Deborah has written other poems about high school and coming of age.

To be swallowed by cellos
and smoke like Buber’s thou—
it is not outside you, it stirs
in the depths of you—
I took
that secret pleasure, scrambled

through Augustine’s rubble
and squeezed by Descartes’
sharp angles. I put out my hands and felt
Nietzsche’s blunt cold walls.
And Plato, I sent my cry out,
and felt it come back in my bones.


I meant to carry the gold back:
What is true and just?
I am human. I am not the only one.

It’s Kol Nidre again.
I find myself thinking of you.
On this night, another chance.
Your belief in me so easily
pours into my cup. I sip it
nightly. Let it travel my veins.

I try to
buy a used
math book
from Lynn.
Lynn, a tall
junior doesn’t
need Honors Algebra
anymore. She offers,
waves the book,
names a price,
but then
I lose her.

I walk into
Geometry to catch
her. I say
I'm here
to buy your
book. She looks
confused. I
back away,

pray
for whatever
kindness the gods
offer black girls
that tall skinny
Chris, the one
who loved espresso,
the one grounded
in Kierkegaard
never knew
I mistook her
for the only
other black girl.
But I’m sure
she knew.

I Know Where I was When Reagan Got Shot

I know you’re thinking — Reagan got shot?
He did. I was in Honors’ Algebra Two,
Lakeside School, Seattle, WA, U. S. A. on the only
planet we know with life.
Reagan was going to blow us up, had his finger
on the trigger, but I found a backroom tv
to watch him survive.

When the Challenger blew, I was in the lounge,
Mary Lyons’ dorm, Swarthmore College,
the only planet I cared about.
I said I didn’t care. I said the earthquake
in Indonesia, thousands vs. seven.
What did I know of children
rowed up in front of tvs?

Columbine just pissed me off.
I might have been in a car pulling out
of late afternoon, this bully filled universe.
The drone of blame — lax mothers, computer
games. The tvs wouldn’t turn off.

Lakeside magazine is published twice yearly, in fall and spring, by the communications office of Lakeside School. To view past issues, visit us on issuu.

Lakeside magazine welcomes your suggestions and letters to the editor. Please send them to magazine@lakesideschool.org or via social media.

Don’t give us the cold shoulder.

We'd love to hear your news!

Got news? An achievement or adventure or chance meeting worth sharing? Send emails to us at alumni@lakesideschool.org. Our spring/summer issue deadline is April 15, 2021. Photos, too. (If you send in your baby announcement and photo, we’ll outfit your little one with a Lakeside bib.) To print well, photos must be high resolution, ideally sent in digital files 1MB or larger. Thanks for sharing! 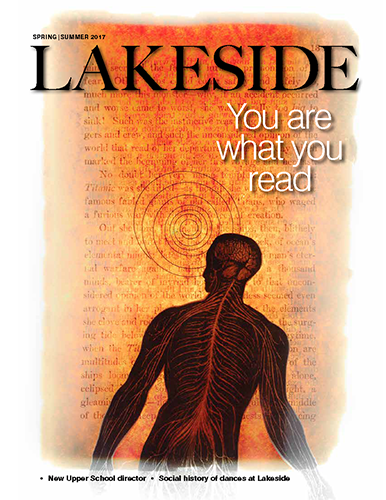 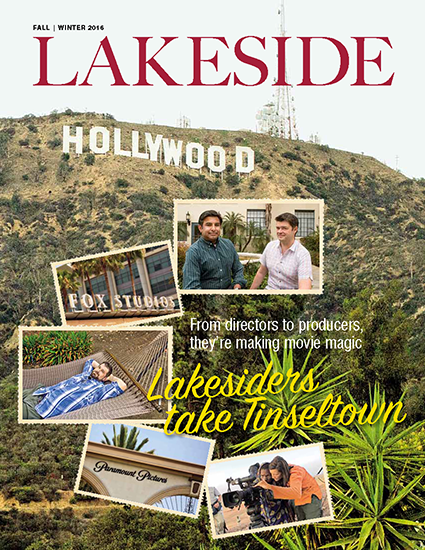