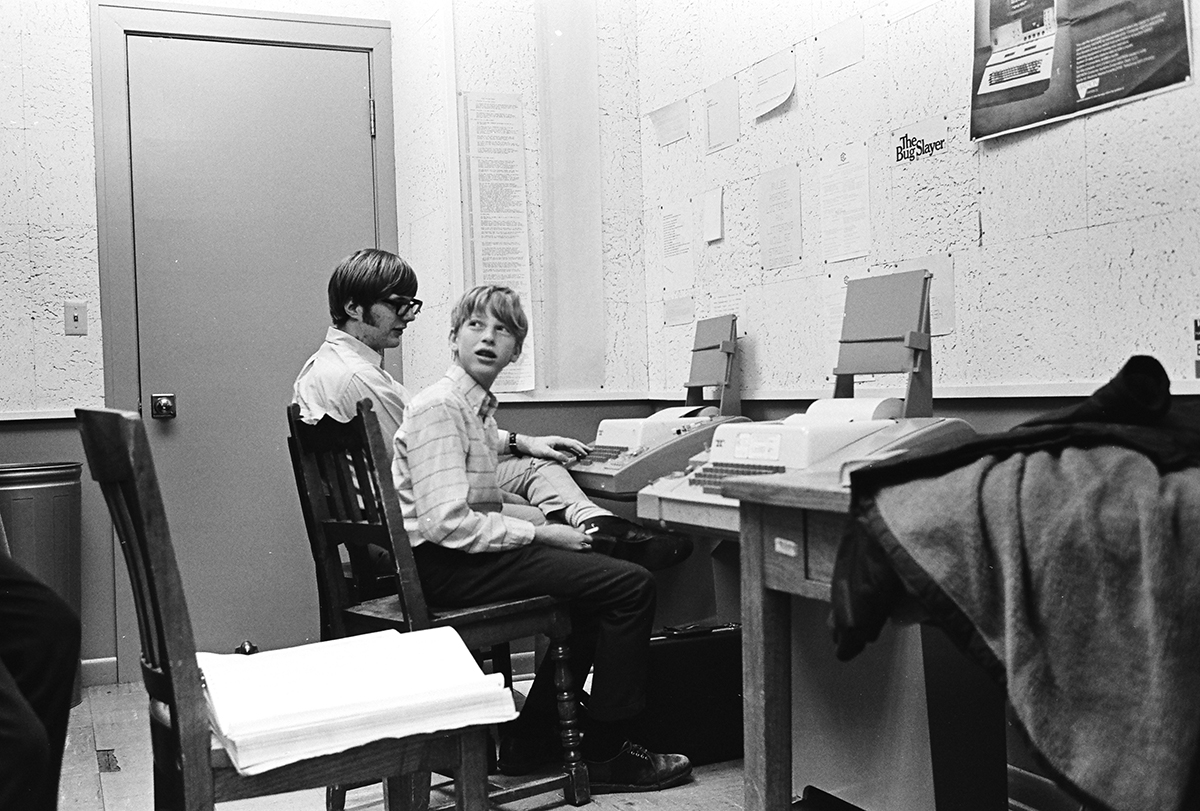 In 1970, every frame had a cost – film, developing, printing – and photography was more of a niche hobby. In that year, about 830 million photos were taken worldwide every month. What are the odds, then, that one of those photos would show Bill Gates and Paul Allen in their mid-teens working with a teletype machine at Lakeside School? And further, that the negative, perfectly preserved, would be found in a file cabinet in my mother’s attic?

For those who knew my father, Bruce Burgess, those odds would actually seem good. My father taught at Lakeside from 1964 to 1972. He also managed the yearbook, which gave him access to film and a darkroom. No fan of flash, he mastered the various esoteric techniques for pushing black and white film to the limit. The photo that appears here was shot with Kodak Tri-X black and white film, pushed two or three stops and developed in a chemical bath designed to round off the grain structure. He and my mother were meticulous about tagging and storing negatives. When he was killed in a plane crash in 1972 (cameras in hand), he left behind thousands of negatives.

In 2007 we started a project, in partnership with Lakeside, to digitize the Bruce Burgess photo archive. Bruce’s photos started to appear in Lakeside magazine and other publications. This particular photo, showing Bill and Paul in the basement of what was McAllister Hall, has also been used in books and public displays on the history of computing.

Digitizing the Bruce Burgess photo archive has been a labor of love. Every photo tagged was a moment relived through his eyes.

In the photo, Paul has a hand on the keyboard of one of the two teletype machines on the table. Bill is looking over at someone sitting behind him – of that person we see only a pair of knees and lower legs. A jacket has been flung onto the table in the careless fashion familiar to parents of teens everywhere.

The photo has historical significance, as would a photo of a young Orville Wright building an airplane model or Stephen Hawking with a toy telescope. It captures a moment that my father thought was important, partly because of the people it portrays but mostly because of the place: Lakeside.

What I see, and what I think my father saw in this casual, messy high-school scene, is the authentic interest of a child, nurtured by amazing teachers, at a great institution.

Seeing a photo of someone loved and now lost can be painful. Seeing the world through the eyes of a photographer who has been lost, even more so. What gives a photo meaning? Photos can be beautiful, or moving. They can invoke a memory that is dear to us or (as with the photos that come pre-installed in frames at the drugstore) a generic idea of a dear memory. I don’t believe that the world contains a fixed amount of meaning that is sliced into tinier and tinier portions by the growing body of photos. Photography is not a zero-sum game. I believe that a photo carries weight when the photographer, whose perspective we adopt, cares about the subject that he is shooting. We read our own experience into a photo, but we can also see something bigger, outside of ourselves, and that “something” comes from the photographer’s perspective.

Digitizing the Bruce Burgess photo archive has been a labor of love. My mother worked with the negatives when they were first created, printed many of them, made quick notes on the negative sleeves, and carefully filed them away. Almost 40 years later, she went through the digitized files and painstakingly tagged each one with a date, a location, and the names of the people in the frame. My father was always the photographer, seldom the subject. Every photo my mother tagged was a moment relived through his eyes. As she neared the end of the collection, she was reliving his final days.