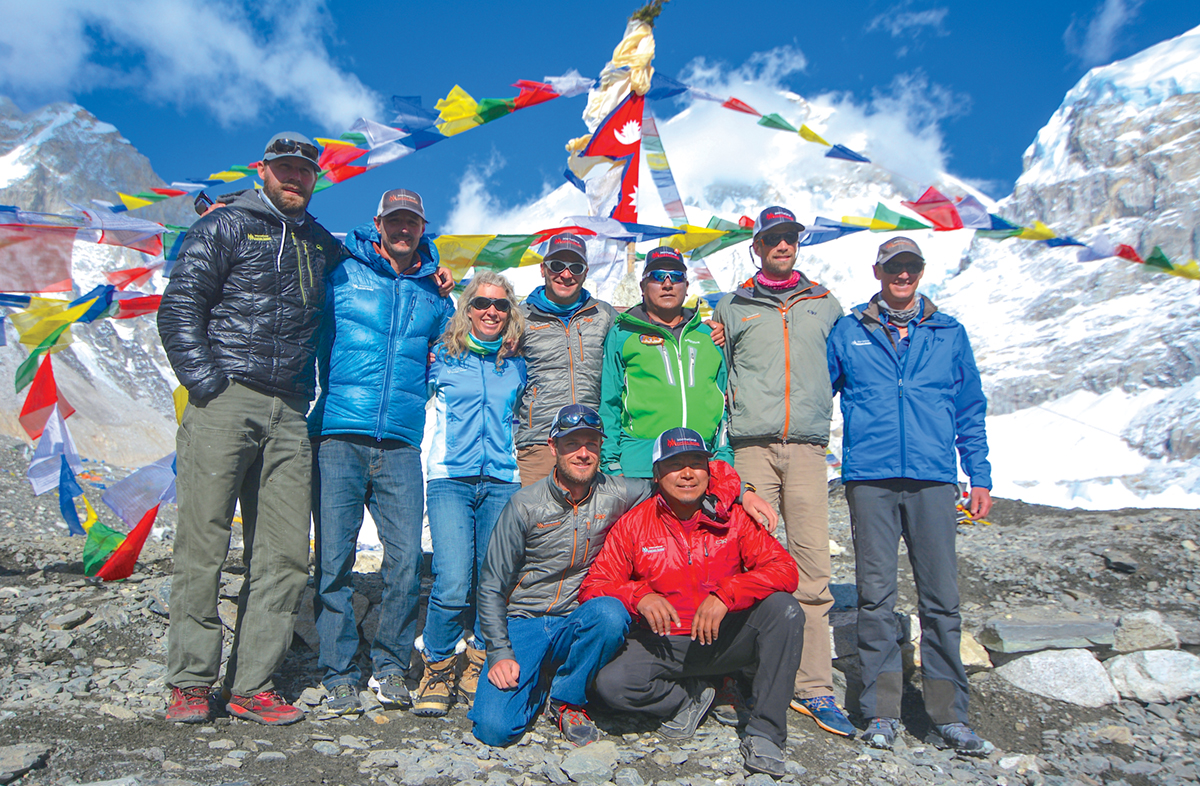 Dr. Emily Johnston ’81 at Everest Base Camp with fellow guides. From here, they climbed five hours to Camp 1, where they slept until being violently shaken awake by a 7.8-magnitude earthquake.

Much of what Emily Johnston ’81 has done in her life — has loved doing in her life — would scare the majority of people witless. Whether on Everest or in the ER she channels fear to take charge.

Start medical school at age 39. Guide people up the tallest mountains and down the wildest rivers of the world. Take charge, during the massive Nepal earthquake, of shepherding to safety the tense and traumatized climbers she was leading on Mount Everest (climbers who had their own ideas of who should be rescued first, and how).

But Johnston doesn’t see courage the way most people do. How she deals with fear — as an emergency room doctor, climbing and white-water river guide, sky diver — is a key to why she passionately embraces the challenges she does.

"I choose to be enchanted by the environment rather than terrified,” she says. Whether she’s crossing a shifting river of ice on Everest or executing a life-or-death medical procedure, she has achieved “the awareness and control to find that ‘still spot’ in the center.” With her mind calmed — “You’ve identified the risks, processed that in your head, dealt with your fears” — she relishes the experience: “You’re in the groove, even in a tense situation. It’s a cool feeling." The roots of this trait can be traced back to her Lakeside days when she was a member of the Mongolian Running Academy, so dubbed by Hugh Tower, the powerhouse cross-country coach and her inspirational mentor. He encouraged Johnston (he nicknamed her “Namun, Woman Warrior”) and her like-minded pals in their love of the mountains and climbing. He also taught Asian history. Learning in his class about Buddhism and meditation, both of which she practices today, she says, “had a profound influence on my life.”

The idea of becoming a doctor lurked in the back of her mind, but for years she was having too much fun as an outdoors guide. Then a skier she was rescuing, who had an underlying heart condition, died. The death, in Johnston’s view the result of poor treatment, hit her hard and persuaded her of the urgent need for better rural medicine. She enrolled at Central Washington University to complete premed requirements she’d never taken during her college years at Middlebury and graduated from the University of Washington’s School of Medicine at age 44. Today her career blends her two worlds: She’s emergency department medical director in the mountain community of Leavenworth.

She works several shifts a month with emergency room doctors at Madigan Army Medical Center and teaches “wilderness and austere medicine” to Army Special Forces medics (she says she relates well to these “badass doctors”); and is an on-call medical consultant for the mountain climbing company she guides for during summers on Mount Rainier and occasionally elsewhere, like Everest.

I choose to be enchanted by the environment rather than terrified.-Dr. Emily Johnston '81

She was in a deep sleep, exhausted after climbing for five hours from Everest Base Camp at 17,500 feet to Camp 1, at almost 20,000 feet. Her group’s tents were wedged in the tight spot between two mountains, just above the treacherous Khumbu Icefall. Awakened by violent shaking she assumed must signal an avalanche, she ran outside, where she was struck from behind by a powerful icy blast. “This is it,” she thought. “This is going to end badly. "

With no idea that the powder blast was triggered by an earthquake, Johnston was certain they were about to be buried in avalanche debris. The Sherpas, their Nepalese porters and guides, had circled together, chanting, om mani padme hung, a protective Buddhist prayer. The debris never came, and her group of 28 and others at Camp 1 were not injured. She soon found out via radio that others had not been so lucky. To her utter frustration, she couldn’t use her emergency medical skills to help the injured back at Base Camp; the quake had destroyed the route back. But at Camp 1, her own trials were beginning. Aftershocks continued all day and tensions were high; the 14 climbers she led were by definition Type A personalities and used to being in command. Some became pushy, knowing the weather might quickly turn and make getting out impossible. But she held command — all 5 feet, 3 inches of her. She stationed two of her biggest guides, both well over 6 feet tall, by the rescue helicopter pad to help her ensure a safe and fair evacuation to Base Camp for the 180 stranded in both Camp 1 and Camp 2. The helicopter could take only two at a time at that altitude. On each trip, they picked one Sherpa and one Westerner, alternating the Westerners between her group and those from other climbing companies. It went without saying, “As a guide, I’d go last.”
Then she enforced the unpopular decision that her group would not subsequently fly to Kathmandu, which was overwhelmed with the seriously injured. Instead, from Base Camp they’d walk two days to Phortse, the home village of many of their Sherpa guides, who offered them refuge; at that point the village was 80 percent intact. They helped the villagers clear rubble for several days then walked two days to a remote airstrip where an airplane picked them up and took them to Kathmandu, by then more able to handle the evacuees. From there, everyone got home safely.
Whether on Everest or in the ER she channels fear to take charge.

Back in the United States, Johnston found out that a second large earthquake (magnitude 7.3) on May 12, with an epicenter much closer to the Everest region, had demolished Phortse. She held a fundraiser at Lakeside that filled Kent Evans Auditorium. She recommended three organizations in particular for those who wished to donate — the International Mountain Guides Sherpa Fund (360.569.2609), www.tigerofthesnows.com, and himalayan-foundation.org — and raised $4,000.

A teacher in the Lakeside audience asked Johnston about lessons learned from the experience. Johnston said she hadn’t learned the lesson most people might have: “If I have a chance to go again to Everest, I’d be back in a heartbeat.”

Carey Quan Gelernter is a communications associate at Lakeside School. You can reach her at communicationsdept@lakesideschool.org. Paula Block is a writer and parent of a Lakeside Middle School student. Reach her at paulablockseattle@gmail.com.