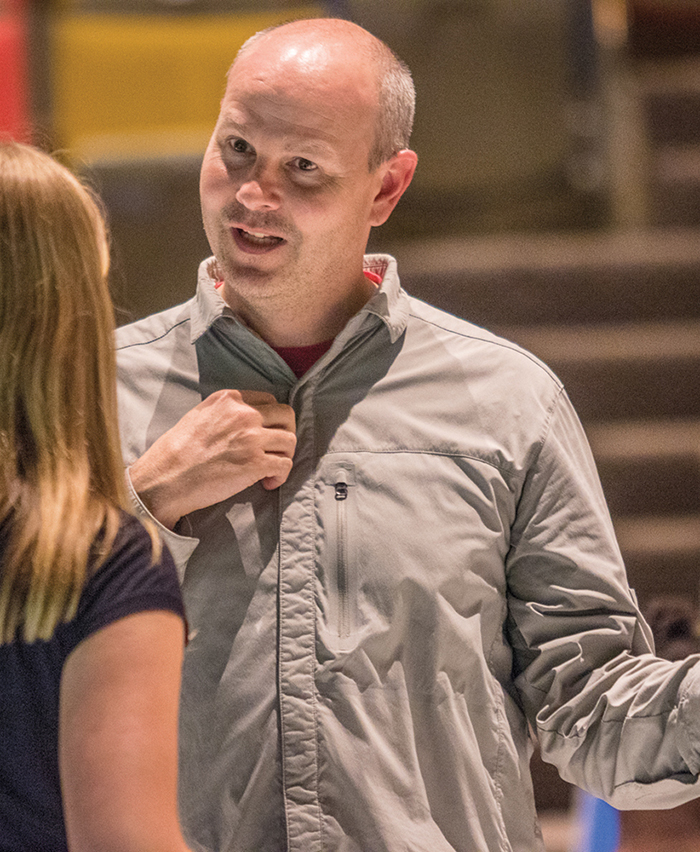 Beside the desk in the office of Upper School drama teacher Alban Dennis, a small card reminds him daily that “Good teaching is an act of hospitality…” The embodiment of those words from educator Parker Palmer is on display early this morning in St. Nicholas Hall’s auditorium. It’s the final chance for Dennis’s Drama 3 class to run through lines and block out scenes before the students perform later that night. By now, they need little help preparing. Dennis’s role in this class is to observe and support, providing the kind of gentle hosting that will get his students ready to be confident on stage.

Ten minutes before the class begins, most of the students in the class have already arrived. They cluster around Dennis, peppering him with questions with the nervous energy that comes with pre-rehearsal on the morning of the big night. A couple of them slip away and find a quiet corner of the stage to start practicing lines; just-arriving students practically sprint in from the back of the hall to get a jump on last-minute planning for props and costumes.

Dennis hops up onto the stage and signals for his students to join him in a seated circle. He wears faded black jeans, a loose collared shirt with the tails untucked, a bracelet, an urban, artsy air that would seem edgy if not for his mischievous smile and the crow’s feet bunched at his temples. Even this morning, with the clock loudly ticking, Dennis sticks with the ritual he uses to start all of his classes, a centering, one-word touch-base with each of his students. He smiles and asks how they’re doing. One after another, the single-word answers fly around the circle: Anxious. Sad. Nostalgic. Ready. Glad. Bittersweet. Ready. Weirded-out. Happy. Ready.

As the rehearsals play out over the next hour, so much of what Alban Dennis teaches — and what the arts stand for at Lakeside — shine under the spotlight.

Dennis has provided the students with the skills, inspiration, and the opportunity to express themselves and to create art, on their own. He has drawn on eight years’ experience teaching at Lakeside, nearly two decades teaching with the Seattle Children’s Theater, and innumerable lessons from a life in amateur and professional theater. His drama students have not only learned to write, act, direct, and stage a play. They have challenged each other, solved problems, resolved conflicts, learned to advocate, learned empathy, been vulnerable, been afraid, failed and overcome failure. Not simply theater skills, Dennis points out. Life skills. He stands in front of the stage, off to the side, nods his head often, says, “LOUDER, Aidan. LOUDER.” He laughs spontaneously at laugh lines he’s heard dozens of times, says quietly, “More slowly, Nicole, that’s it. That’s it…”

But mostly he observes, having done his job, watching adolescents in the fullness of their creative lives do their thing.