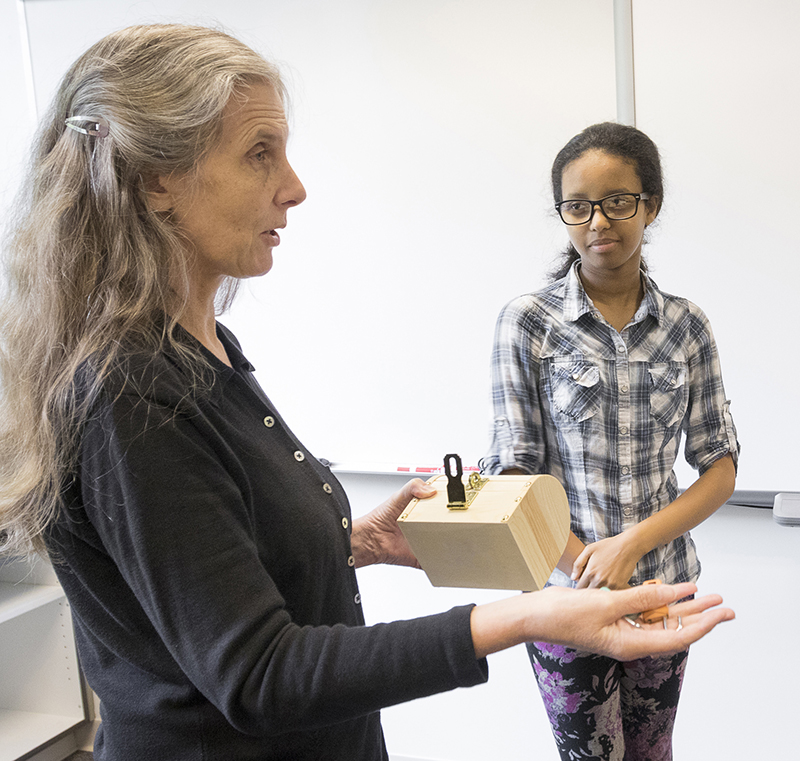 Unlocking a passion for math in middle-schoolers

Years ago, when Granya O’Neill was teaching math to college students, she’d come home exhausted at the end of the day. She used the Socratic method in her classes, lecturing and directing questions from the front of the room, and – too often, it seemed to her – needing to perform to make the material entertaining for her students. “It was so discouraging,” she recalls. “Students’ attitudes toward math are often shaped by their early experience. I had so many bright students who had never really been given the chance to fall in love with math.”

Volunteering in her daughter’s 7th-grade class, O’Neill discovered how much fun it was to teach math to middle schoolers – students who were capable of sophisticated mathematical reasoning, who hadn’t yet decided they were no good at an entire academic field. She found their enthusiasm infectious, though in all likelihood it was her own enthusiasm that she felt radiating through her classroom. It turned out she had a gift for getting kids to fall in love with math.

Ten years in, now, at Lakeside Middle School, teaching 6th- and 7th-graders, O’Neill still can’t get over the difference between Lakeside students and the ones she taught in college.

“Students here are so eager to learn,” she says. “They’re curious. They’re grateful. Every single day, one or more of my students thanks me at the end of class. I love that about them.”

On this particular morning, O’Neill asks her 6th-graders for volunteers to act out a classic logic challenge known as “The Russian Postal System Puzzle.” A dozen hands shoot up. She has props – a box, a diamond ring, a couple of padlocks and keys – and a question: How can Boris, who lives in Moscow, send Natasha, who lives in St. Petersburg, a diamond ring through the corrupt Russian mail if all letters are checked and all valuable-looking parcels opened and their contents stolen?

Hands shoot up again, one suggestion, then one quickly started and rescinded, then another try. The students critique each other, find flaws in each other’s answers, and keep offering. The students are engaged, respectful, orderly – though there seems to be no discipline keeping them that way, a mark of a master teacher’s class. O’Neill walks around, draws out the quieter students. She lets the students try and try again for 20 minutes, gently guiding and encouraging them, before one of them solves the puzzle: Boris phones Natasha with the plan. He’ll send the ring in a padlocked box and keep the key. When she receives the box, she’ll double-lock it with her padlock and return the box to Boris, holding on to her own key. Boris will remove his padlock with his key and return the box to Natasha, who will remove her padlock with her key, and open the box. The class is silent. “Will that work?” asks O’Neill. More silence. Some nodding heads. Someone cheers.

“You got it,” O’Neill says. She tells them the solution illustrates a concept that mathematicians know all about. “Do an operation. Do another operation. Then undo. Then undo. That’s a common way that computer messages are encrypted to keep them from being hacked. The same way Boris kept Natasha’s diamond ring from being hacked….” And 30 minutes into her class she finally comes to the topic she’s introducing. The kids seem to have gotten there themselves, on their own – and the aha! moment of an epiphany ripples through the room.

It’s a small moment, one of hundreds through the course of a year, but it reveals much of what Granya O’Neill lives for in her teaching. These new Lakeside students, with varying backgrounds and levels of mathematical preparation, have worked together to solve something hard, and then are surprised by the unexpected dimensions of the answer. So what if it took most of the class time to get there?

“I’m never tired at the end of the day here,” says O’Neill, even though she regularly comes in early or stays late, giving extra time to kids who are worried or struggling with some aspect of math. “I don’t need be entertaining. I don’t need to show these students that math is cool. I just need to show them math. They know it’s cool.”