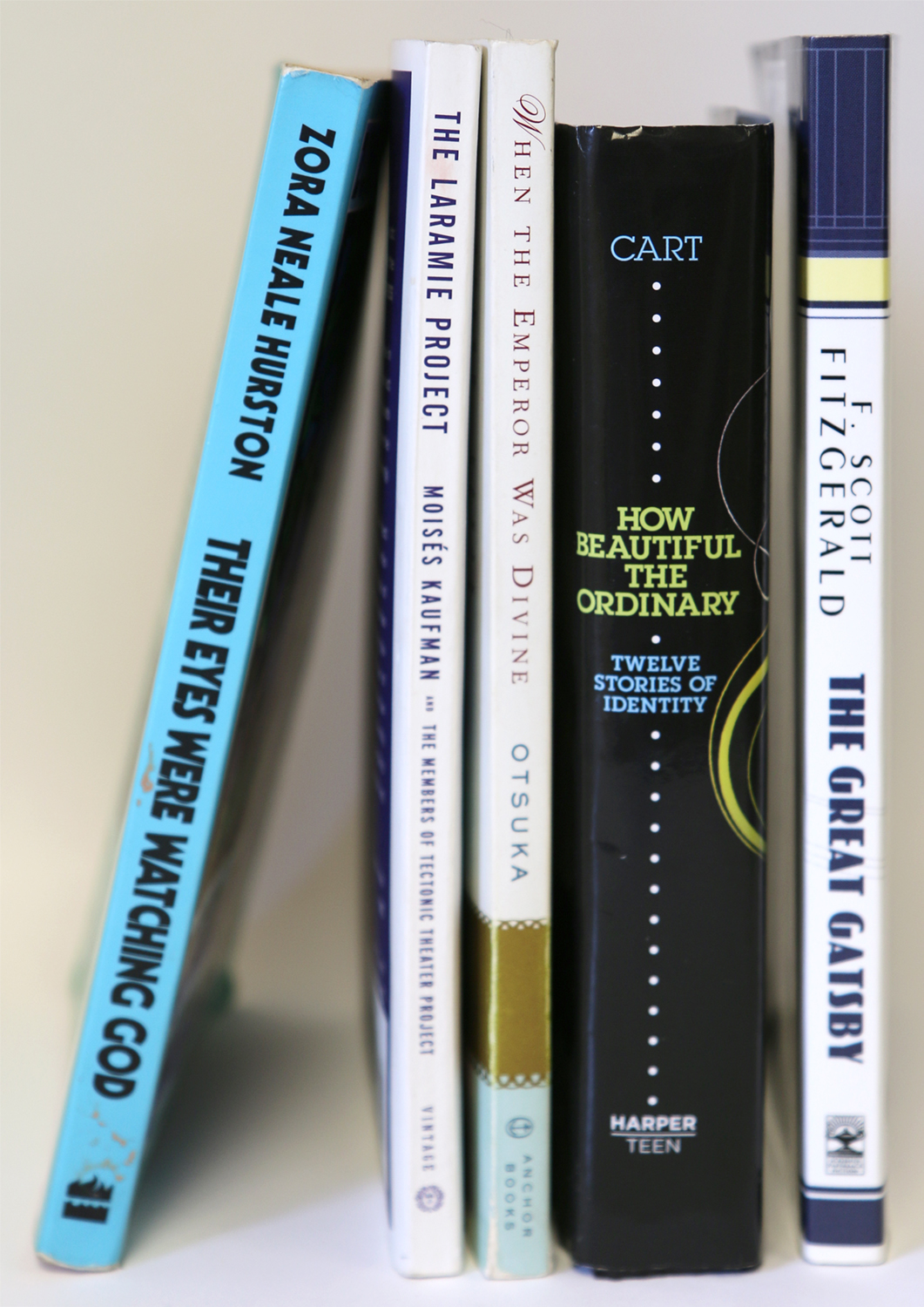 Every year, juniors in Lindsay Aegerter’s American Cultural Studies class focus on issues of American identity – both across the nation and their own. Midway through the year, students compose a personal essay on the topic that is inspired by their readings of “The Laramie Project,” a play by Moisés Kaufman about the reaction to the 1998 murder of gay college student Matthew Shepard, “Their Eyes Were Watching God” by Zora Neale Hurston, and pieces from the anthology “How Beautiful the Ordinary: Twelve Stories of Identity.”

“Students have carte blanche to write about anything that feels personally important to them,” says Aegerter. The assignment allows students to connect their lived experience to the literature they are reading. “Writing in this way allows students the first platform for expression,” she says. “Once you’ve written about something, it makes it easier to speak about it.”

Students choose from 10 prompts, or can propose their own. Prompts touch on issues ranging from coming of age, privilege, marriage equality, political correctness, and why it is important (or not) for students to read literature about identity. An essay from Ryan T. ’17 appears here.

The Myth that Shapes Reality

In late October, as I was mindlessly scrolling through my curated Medium feed, I stumbled across a poignant article written by Christopher Kang, director of the National Council of Asian Pacific Americans, titled “The ‘Asian Advantage’ is a myth. Plain and simple.” The piece was written to rebut famous New York Times op-ed writer and two-time Pulitzer Prize winner Nicholas Kristof’s column titled “The Asian Advantage.” Intrigued as to what this advantage supposedly is, I opened the hyperlink that took me to the New York Times website. I immediately saw the image of four Asian students at their commencement draped in Columbia blue, which helped push the narrative of over-achieving Asians in America. Kristof then went on to state that Asian Americans are not necessarily smarter than other Americans, but they are harder workers, who usually come from strong white collar two-parent families and benefit from a culture that highly emphasizes education. Soon after, I discovered many pieces that articulated the falsehood of the “Asian advantage” and highlighted the negative effects of generalizing Asian Americans as the “model minority,” especially on Asians who are not Korean, Chinese, or Japanese. Kristof’s opinion piece has sparked a debate within the Asian American community, but more importantly it has made me realize the great influence stereotypes have had in shaping my own identity.

Societal stereotypes about Asians first began to shape my self-identity when I entered kindergarten. While growing up and attending my first year of school in Aurora, Colorado, which is located about thirty minutes away from downtown Denver, the only other Asian child I knew in my grade and neighborhood was my younger cousin. I was viewed as the Asian outsider in the suburbs of Denver. I remember that I always hated introductions when I was younger because the children around my age were not used to someone who was not white or Latino, so they easily came to false conclusions about me ­­­— the outsider. Kids I had never met before would ask me what my name was and where I was from, and I would happily respond by stating my full name and that I lived a couple blocks away just off of Alameda Avenue. However, five- and six-year-olds are not great at pronunciation, so they would butcher my name and give me nicknames that I did not ask for. Then, they would ask me where I was really from because most of them could not fathom that I was born in the same Denver hospital that many of them were born in, too. Resigned to their curiously ignorant questions, I would answer that I am Mongolian, but these kids who had not even taken local geography did not know where Mongolia is. Staring at me in confusion, my classmates would label me as the Japanese or Chinese kid.

As I grew older, I realized more and more kids were calling me “Genghis Khan,” thinking they were clever. During school, I began to tell people less and less about myself, so they would only know me as the “Asian kid named Ryan.” Up until my first day in middle school, I was reluctant and scared to tell people my last name, and especially my middle name. Retrospectively, I realize that these awkward and highly embarrassing interactions, which resulted in me being labeled as something I did not want to be labeled, quickly made me shyer and more isolated from the rest of the students. I became less focused on making friends and more focused on doing my schoolwork to the best of my abilities. Initially, doing well in school equated to my parents allowing me to escape from my lonely world full of kids who did not understand me by simply playing hours of Pokémon.

The next year, my parents moved our family of four to Kenmore, Washington, so my sister could attain a better education by attending a top public high school. This meant I had to go through a new batch of dreaded introductions with new classmates all over again. Unexpectedly, second grade was easily the happiest year of my entire elementary school career because I befriended a Vietnamese boy named Logan Nguyen. He understood what it felt like when classmates thought of him as the Chinese kid with the weird last name who was amazing at multiplication and probably had doctors as parents. Our shared stereotype brought us together, and our love for Pokémon made us best friends. In a weird way, the stereotype that as Asians we should be the most intelligent students in the class motivated us to work harder than our classmates. I was never particularly good at math, but I remember the hard work I put into improving my own basic math ability while my other classmates played outside. Throughout second grade, Logan and I were the inseparable star students of our class. Together, we tried to live up to the stereotype that was imposed on us. In an attempt to make the stereotype true, we were letting a stereotype define who we were.

From a young age, both my sister and I were taught about the important role that education would play in our futures and warned about the hard lives we would have if we did not do well academically. While this philosophy, which is closely associated with the Asian stereotype, may sound harsh and unforgiving, both my sister and I have found it to be highly motivating. It is hard to disobey my own parents and slack off in school when I see them working long and tiring shifts at their manual labor jobs that they clearly do not enjoy all so they can set me up to succeed. After second grade, I remember how my family changed my school three more times before finally coming to Lakeside, each school more challenging than the last. Each change to a new school meant that I would have none of my old friends, and I hated introductions, so the only thing I truly had was my goal to fulfill my potential and do well in the new school.

I remember the pure joy I saw on the faces of my parents when my sister got her acceptance letter to Yale with a full-ride scholarship, and I still remember how excited they were when she earned her undergraduate degree and later her master’s degree. I remember how great my parents felt when I got into Lakeside, and I felt great, too, because I made them proud. I fully understand how “tiger moms” and other stereotypes about Asian parents came to fruition because most of the time these parents were immigrants who worked multiple low- paying blue-collar jobs, so their children would not have to. My parents serve as my daily motivation because I strive to repay them for everything they have done for me by excelling in education like my sister did. My hard work is rewarding because I realize that I am the happiest in the moments when my parents are also happy. As a child I studied hard to live up to the stereotypes set upon me to appease my classmates and prove them wrong, but currently I work hard to make my parents happy in an effort to show my gratitude and appreciation for all they have done.

Stereotypes and gross generalizations are clearly detrimental to modern society because marginalizing groups of people based on false pretenses hinders the development of individuals. I truly believe that if more of my classmates from when I was younger accepted me for who I really was as an Asian American, without generating false labels about me, I would be less of an introvert. My attempt to live up to the Asian stereotype placed upon me inhibited me from fully discovering my own self-identity because I ended up adopting so much of the stereotype. As a child I decided to study more and live up to the stereotype of the overachieving Asian because I believed that that was what I was supposed to do. Nowadays, I realize the importance of breaking stereotypes, so I hope my children in the future can live happily focused on their own passions. Finally, although the “Asian advantage” clearly does not apply to all Asians, I now realize the more important universal advantage that one can acquire is finding one’s own source of motivation to fuel hard work for whatever is most important to him or her.