Lakeside students taking Algebra I come from a variety of schools and with different experiences in math. Upper School math teacher Ben McKinley designed a project for the first week of class that introduced students to each other as well as to important mathematical skills they would use all year.

The project is deceptively simple: How do you best fold a fitted sheet? The 16 students were divided into pairs and handed eight fitted sheets of various materials. They had 30 minutes to neatly and compactly fold a sheet. At a certain point, students were told to swap sheets and fold the new sheet in three minutes, putting what they’d learned to rapid use while adapting to a new material.

The goal of the project, says McKinley, is to model how to solve a challenging problem. Students collaborate with a classmate, make use of outside resources, gain experience in communicating mathematical thinking, and see that there is more than one way to approach a difficult problem. It also gives students the opportunity to focus on these skills without being distracted by mathematical concepts. “I’ll be able to refer back to the success every student had during this project when they face challenging math problems during the course,” says McKinley. 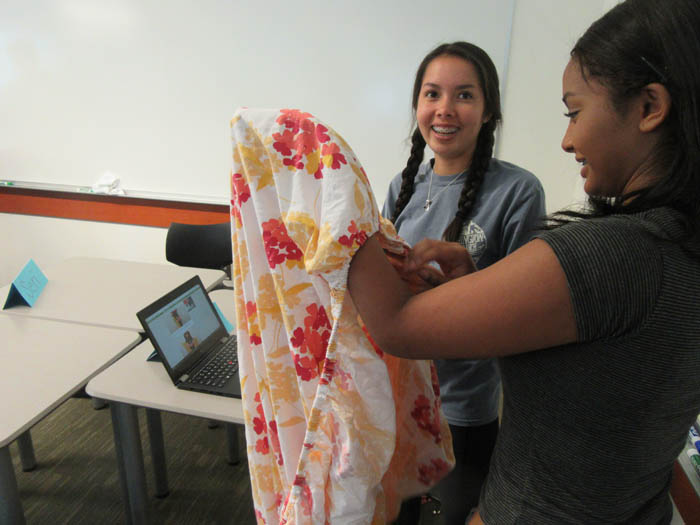 One unexpected benefit, McKinley notes, was that the project highlighted how students’ different experiences, skills, and thought processes aided the group. For example, one student had gained expertise in folding sheets while helping in a relative’s laundromat; another had years of experience folding flags in Girl Scouts. One pair took a creative approach that built on McKinley saying they could use their computers: They literally folded their sheet around a laptop.

At the end of the period, students lined their sheets against the wall and voted on their favorites. Debriefing a few days later, the students reflected on, as one student put it, “the educational ice breaker.” Aiden C. ’20 wrote, “The activity … was almost like a metaphor for solving a really complicated problem – it was legitimately challenging.” Many students discussed how the teamwork and competition aspects helped them get to know their classmates as well as explore different problem-solving approaches. “Critical thinking, leadership, and teamwork were all present,” said Lauren E. ’20, while fellow 9th grader Sasha N. reflected that “I can see how I’ll use these same basic skills in the future too, even if it’s in a different context.”

View more photos from the challenge below.