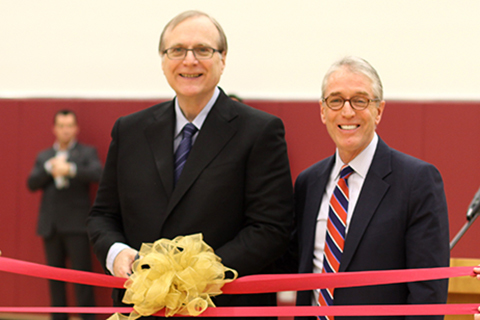 Mourning Paul Allen, Class of 1971
Oct 16 2018 8:53 AM
Share to FacebookShare to TwitterShare to Google+Share to LinkedInShare to PinterestShare to EmailPrint this page

The entire Lakeside School community mourns the death of Lakeside alumnus Paul Allen, Class of 1971, and we extend our condolences to his family and loved ones. In his devotion to brain research, sports, the environment, education, and the arts, Paul embodied the school’s mission of developing in intellectually capable young people the creative minds, healthy bodies, and ethical spirits needed to contribute wisdom, compassion and leadership to a global society. He devoted his energy and resources to making the world a better place for others.

Paul and his dear Lakeside friend, Bill Gates, got their start in computing while at Lakeside, working from a school teletype terminal and logging the 10,000 hours of practice that would lead to the personal computer revolution. Few on the faculty understood what they were doing, but all were quick to recognize the value of their work when they designed the school’s first computerized class schedule!

Paul was also a great supporter of Lakeside School, funding the Allen-Gates Hall in 1987 (which Paul and Bill decided with the flip of a coin would be Allen-Gates Hall rather than the Gates-Allen Hall); establishing a technology endowment that has fully funded our technology efforts since 2002; and, along with others in our community, funding The Paul G. Allen Athletic Center in 2014. Generations of Lakeside students will benefit from Paul’s generosity and we are grateful for his commitment to his alma mater.

And Paul was a great Seattle guy! I once congratulated him on a stellar Seahawks season and he quickly gave all credit for the team’s success to the players and, especially, to the fans. He remarked how amazing fan support was in Seattle and in the region and how much that mattered to the team’s success. As he was about everything that he did, Paul was humble about it all; he was a kind and gentle man. He even tried to create a Central Park in Seattle's South Lake Union area to make his city even more beautiful and livable.

Like everyone in Seattle, and around the world, we will miss Paul and all that he did for so many others. We are so very proud to call him an alumnus of the school.