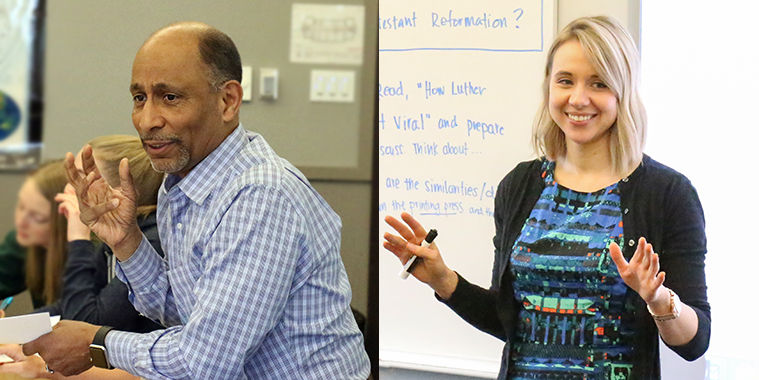 Q & A with members of the Lakeside Lecture Series speaker selection committee
Mar 1 2017 10:13 AM
Share to FacebookShare to TwitterShare to LinkedInShare to PinterestShare to EmailPrint this page

Communications Director Amanda Darling spoke with faculty members on the Lakeside Lecture Series speaker selection committee, Bob Henry and Kathryn Brooks, to learn how the committee approaches the responsibility of choosing speakers. The following is excerpts from their conversation.

Q: How does the speaker selection committee work?

Kathryn Brooks: The group is made up of faculty, staff, students, a representative of the Parents and Guardians Association, an alumnus, trustees, and Bernie. Allison [Conkin, the special events coordinator,] chairs it. We meet a couple of times; the first meeting is a brainstorming session. We talk about who we might bring to campus that will talk about important issues and will get people talking.... But we also think about what is going to engage students.

Each of the lectures has a specific directive, so we think about what kinds of speakers might fit with that mission... We have names [of people] that other members of the community have put forth. Anyone is welcome to suggest a speaker. It's not intended to be a closed, private thing.

Q: As a teacher, what do you see students being particularly interested in hearing about?

Bob Henry: They like controversial topics, obviously. I find when I take a speaker back to my classroom – which is fairly regularly – that the kids (even those who aren't in my classroom) have pretty good engagement with the speakers. They ask good questions... [Students are] interested in life stories. So it's also how the kids find their own ways of connecting to them. It's seeing themselves and their own futures in these roles....

Q: Some people think that the goal is to have speakers that primarily talk to alumni or parents and guardians. But it sounds like it's really about having people talk to the students. What role do these lectures play in students' education?

Bob Henry: [Students] are being presented role models of citizenship. People who have contributed in any number of ways to the wellbeing of our city, our state, the country, our world.... And, [we're asking students] to engage in these issues of citizenship, issues that citizens should be knowledgeable about and experienced in.

Kathryn Brooks: If you have someone coming in from the outside world... sometimes [students are] like, okay, this is a real thing. When you have the experience of seeing someone [in person] it can create more of a personal investment in that issue. For example, some of [students] had no idea who Howard Dean or Karl Rove were.... I know that some kids now feel – perhaps not more invested in U.S. politics – but at least more of a connection and interest.

Q: What consideration is given to gender, ethnic, or racial diversity, of speakers? Or any other kinds of diversity – age, geographic, kinds of positions held, etc.? How do you balance those considerations?

Kathryn Brooks: One of the things that I think should be a goal of the committee is to be mindful of the implicit messages we're sending to students by whom we choose to bring to campus. It's really important that we're mindful of bringing in men, women, people of various ethnicities and races, people that did not all go to Ivy League schools. Because it's hypocritical if we're saying 'you can succeed wherever you want' and then everyone who comes in went to Yale.... I think it says a lot about an institution, about who they're willing to bring to campus. None of these lectures are explicitly devoted to issues of gender, race, or class but those are all things I think we should be talking about annually.

Bob Henry: All the time.

Kathryn Brooks: Yes, and in a really deliberate way. Inequality is a hot issue in America right now but it's perpetual and it will always be an issue in societies, in American society in particular. I think if we really want to walk the talk around that we need to start inviting people who are going to talk about those things.

Bob Henry: Talking about those things broadly. From perspectives that you never considered to begin with.

Q: We say that hosting a speaker is not an indication that Lakeside endorses or approves of a speaker's views. But are there certain individuals or viewpoints that would not be welcome on the Lakeside campus?

Kathryn Brooks: I don't know where you draw the line and you decide, look, this person is so morally offensive to me that I can't permit their voice to be heard in our community. There's got to be a line somewhere.

Q: That was a question that did come up, for example, with Karl Rove. How does the speaker selection committee draw the line?

Bob Henry: We draw the line partly with the topic we give them to speak to. [We paired] Karl Rove [with] Howard Dean, so we had equal time [for different viewpoints].... There are not many people, if we control the topic, I wouldn't think would be cool to come.

Kathryn Brooks: It's a really interesting question. I don't think we want to be setting up a model that [limits] exposing yourself to ideas that you don't agree with – and I want to go a step beyond and say that you find morally objectionable. That it somehow contaminates you. Because I think that's really dangerous. You can engage with things with which you don't agree without condoning them.

Q: In picking speakers, is there value placed on including a variety who represent diverse thought (political, philosophical, etc.)? And, if so, how do you define diversity of thought?

Kathryn Brooks: It's a good question. It's something the committee continues to wrestle with. It's not as simple as a political (liberal versus conservative) sense.

Bob Henry: Hm. I'm going to back up. There's a circle that I would consider appropriate for young people to be exposed to. Outside of that circle, I think you're running the risk of creating havoc within the community.... There is a circle around the politics I would want students exposed to in our community.

Q: Can you talk more about what you mean by saying a circle of what's appropriate?

Bob Henry: When we invite someone, [we have to think about] what [the speaker] has to say and how [the students] are going to deal with what he's saying and with each other. It does no good within the community for us to have ill will, etc. So, the circle means, what can we stand to hear? This is not a first-amendment institution. Because we have a responsibility toward all of our students, to the young people. That constrains what we're going to expose them to.

Kathryn Brooks: We do have a responsibility as an institution to expose kids to multiple perspectives. I tell my bioethics students: with some questions, there's no answer. But some answers are better than others. It's possible to have an answer or a perspective that is more logical, more based on fact, more grounded in moral principles shared by the majority of humans. I don't think truth is totally subjective. I think we do have an obligation to make sure that kids are hearing most sides of the story.