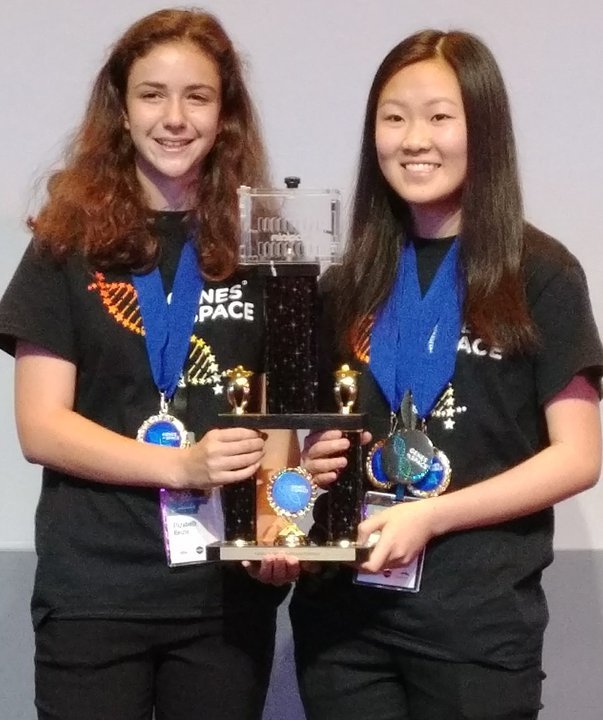 Sophia C. '20 has been named a winner of the national Genes in SpaceTM competition. In an unprecedented tie, Sophia (pictured right, in photo above) and another 14-year-old, Elizabeth R. from Stuyvesant High School in New York, will both have their experiments performed in low Earth orbit aboard the International Space Station (ISS).

Sophia's experiment, which ties in with Lakeside's 9th-grade biology curriculum, aims to measure cancer-inducing genomic instability in astronauts. She was mentored by Lakeside science teacher David Joneschild '90, who also taught Sophia in biology.

The innovative Genes in SpaceTM competition calls for students in grades 7 through 12 to design an experiment to solve a real-life space exploration challenge through DNA analysis. The competition was founded by miniPCR and Boeing and is sponsored by Math for America, the Center for the Advancement of Science in Space (CASIS), New England Biolabs®, and FedEx.

The winning experiments were announced in July at the ISS Research and Development Conference in Washington, D.C. Sophia and Elizabeth were chosen from a competitive group of 375 applications from across the country. They were among five finalist teams who were invited to present their proposals before a prestigious panel of scientists, educators, and technologists, including Dr. Philip Schein, member of the board of CASIS (which manages the ISS U.S. National Laboratory); Michelle Daly, MƒA Master Teacher; Ezequiel Alvarez Saavedra, Ph.D., co-founder of miniPCR; Nicole Nichols, Ph.D, Group Leader at New England Biolabs; Brice Gaudilliere, M.D., Ph.D., Assistant Professor at Stanford University; and Sarah Wallace, Ph.D. microbiologist at NASA.

Learn more about the competition at its website: https://www.genesinspace.org/