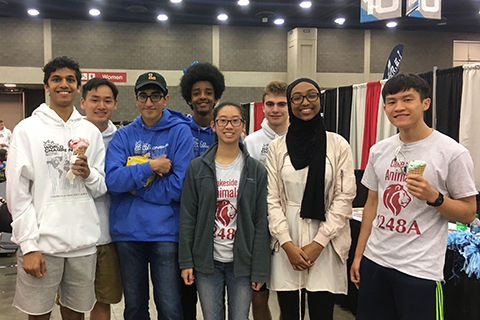 STEM clubs achieve regional and national recognition
Mar 22 2019 10:43 AM
Share to FacebookShare to TwitterShare to LinkedInShare to PinterestShare to EmailPrint this page

This article was updated May 24 to reflect additional achievements.

Lakeside STEM-related clubs and teams have been earning recognition at the local and national level throughout the spring.

The Lakeside team score, the sum of the top three AMC 12 scores, earned the School Certificate of Honor for a score over 400. The top three scores, belonging to Carl S., Colin T., and Sanjay R., summed to 429, the highest team score in school history.

Colin has been selected to represent the U.S. at the International Math Olympiad in the United Kingdom this July, one of six students on the team.

Carl also recently competed in the Romanian Master of Mathematics competition. Selected as one of four high school students to represent the U.S., Carl was awarded a gold medal for his individual performance and helped the U.S. to a first-place finish.

Sanjay R. and Colin T. finished in the top 400 students nationwide on the F=ma Physics Exam, qualifying for the USA Physics Olympiad on April 2. Sanjay was selected to represent the U.S. on the five-member team at the 2019 International Physics Olympiad, to be held this summer in Israel.

Individually, Bryce T. placed first in blitz chess, defeating a grandmaster, and seventh in the championship division. Patrick P. finished 30th in the under-1600 division.

Elaborating on the nature of the event, club advisor Brian Reiser said, "each round lasted up to four hours, and most of our players played, quite literally, 10-12 hours of chess in one waking day and about 25-28 hours of chess total over about 55 hours total."

Sophomore members of Lakeside's Launch X Club Patrick P., Simon K., and Vincent W. placed third in the 2019 Youth Entrepreneurship Challenge sponsored by the Seattle Entrepreneurship Club. They developed an app that uses social media to connect students to volunteer opportunities. They were also finalists at the Launch X Regionals in San Francisco, winning Best Solution and Traction for the app.

The Lakeside Science Bowl Team recently competed in the Pacific Northwest Regional competition where 13 Lakeside students competed against 38 other teams on tests and challenges in the fields of biology, chemistry, physics, earth sciences, and mathematics. Tanvi G. '22 and Belle P. '21 excelled in the Disease Detective challenge, Gracie L '21 and Eden M. '21 surpassed the Herpetology test, and Jonathan H. '20 impressed with his Mousetrap car.