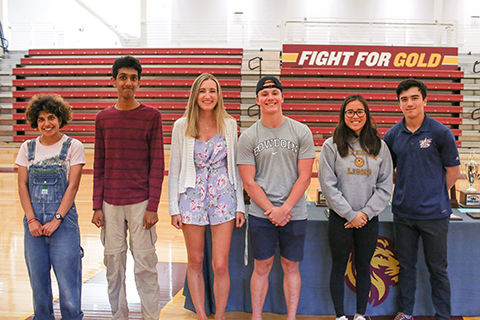 Student-athletes celebrated at Lakeside Versus assembly
May 24 2019 9:00 AM
Share to FacebookShare to TwitterShare to LinkedInShare to PinterestShare to EmailPrint this page

Lakeside students, faculty, and staff came together Wednesday at the “Lakeside Versus” assembly to honor the commitment and passion of hundreds of Lakeside student-athletes.

“It is an honor for me to stand before this community and share incredible examples of the amazing work that our student-athletes, coaches, and teams do,” said Director of Athletics Chris Hartley. “I believe that the opportunities that are offered through Lakeside Athletics are powerful ones. Deep and meaningful friendships are developed. Athletes are mentored by caring, intelligent coaches and learn about everything from how to respond to failure or disappointment to how to win with humility, how to commit to long-term goals to how to be supportive, contributing members of a team. These lessons are ones that I believe help our student-athletes be successful in all areas of their lives.”

Hartley shared a recap of each spring team’s season, and members of each team stood and were recognized by their classmates. (Watch for updates on the LakesideLions Twitter feed.)

Girls Ultimate Frisbee: Welcoming a large group of 9th-graders this year, the team was led with distinction by captains Sarah L. ’19, Elise C. ’20, Naomi L. ’19, and Catherine Z. ’19. The team focused on growth, competition, and togetherness, which led to a fun and rewarding season.

Baseball: The team finished a successful season with a record of 20-3, and were undefeated in league play, winning the Metro League title – the second in school history. Lakeside was the first Metro League team in eight years to go undefeated. The seniors graduate as the most successful class in program history, with an overall record of 79-10, two regular season titles, and three trips to the state tournament. The team was also named WIAA 3A Academic State Champions. Senior Corbin C. was named Star Times Player of the Year and Gatorade Washington Baseball Player of the year.

Boys Crew: At the end of a successful season, 19 varsity athletes competed at the Northwest Regional Championship. The lightweight 8 qualified for the national championships and will head to Florida to compete in June. This is the fourth year in a row the team will be taking a boat to the National Championships, a momentum made possible by the hard work and dedication brought by the entire team.

Boys Lacrosse: The varsity team had a successful season, accomplishing major wins throughout the season that led to a top seed in the playoffs. The team’s season ended in the state semifinals with a loss to Seattle Prep. Senior Will C. was named an Academic All-American, and juniors Charlie H. and Jake J. were named All-Americans.

Girls Lacrosse: The varsity team finished third in regular season play and were led by five seniors to the State Championship semifinals, where they fell to Bainbridge. Three players, Lauren C. ’20, Anna K. ’20, and Grace H. ’20, received all-state honors, and coach Jamie Asaka was named Coach of the Year. Lauren C. ’20 broke the state record for career draws, with 368 and another year to go.

Boys Soccer: The varsity and JV teams had outstanding seasons, beating Eastside Catholic and O’Dea to make the Metro League final versus Roosevelt. The team defeated Roosevelt to qualify with a top seed for the State tournament. After wins against Squalicum and Stadium, the team will face Mountain View in the state semifinals Friday, May 24.

Boys Tennis: After an undefeated 9-0 season, the boys team cruised to their eighth consecutive Metro League title and the district title. Jason E. ’20 and Jack D. ’20 were Metro doubles champions, Alan Y. ’19 took the district singles title, and Tate F. ’20 and Alan F. ’20 are district doubles champions. All five will head to the state tournament this weekend.

Girls Tennis: The girls team had a strong season, ending league play 8-1. Emma S. ’19 and Kate P. ’22 finished sixth in doubles and Sally Z. ’21 finished sixth in singles at Districts. Crystal X. ’19 and Amber E. ’22 won both the Metro and District doubles championship, and head to the state tournament May 25.

Track and Field: The boys and girls track and field teams’ season was marked by promising beginnings and storybook endings, with 21 seniors ending their Lakeside careers and 19 9th-graders competing for the first time. Both teams had an excellent showing at Metros, with many moving on to districts, and four qualifying for the state tournament. Kamila S. will compete in the 200- and 400-meter dashes, and Fred L. ’20 and Claudia H. ’21 will compete in both the 1600- and 3200-meter runs. Senior Sanjay R. graduates as one of the most accomplished distance runners in program history, this spring winning two Metro and District titles, anchoring the distance medley relay to a school record time, and recording the 2nd and 4th fastest times in school history in the 1600- and 3200-meter runs, respectively.

Girls Swim and Dive: The team dominated for the fifth year in a row, winning the Metro League championship and placing second at the state meet. The 200-medley relay team broke the district record with their time of 1:45.91, strong enough for an All-American consideration.

Volleyball: The team bounced back from a challenging Metro tournament to win the District 2 Championship. That led them to a strong showing in the state tournament where they took second place.

Boys Swim and Dive: The team ended a strong season with a runner-up finish in the Metro League meet.

Kathryn Helde was recognized for her contributions to the athletics program. “If your team had a great meal during the season, a great banquet, and all of the necessary volunteers to run your events, you have Kathryn to thank,” said Hartley. He also recognized Lakeside Athletics staff and coaches, a thanks that was echoed by all the students, faculty, and staff in the audience.

Mike Lengel, football coach and assistant director of athletics, was awarded the Harry Swetnam Award, which is given each year to the Lakeside parent or friend who perpetuates the spirit and camaraderie that were so important to the man for whom this award is named. In bestowing the award, Hartley said Lengel “cares first for his athletes as people, then as players. … This award celebrates an individual whose approach to their work goes over and above even the highest expectations. Without a doubt, Mike Lengel does this.” Lengel received a standing ovation from the students.

Hartley concluded the Versus portion of the assembly by recognizing Thomas Thongmee ’14, who has been supporting teams with statistics and video, as well as attending every practice and helping however he could, including some coaching.