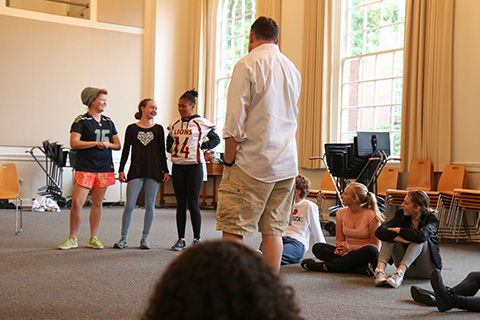 Students learn theater (and life) lessons at drama retreat
Sep 28 2016 12:53 PM
Share to FacebookShare to TwitterShare to Google+Share to LinkedInShare to PinterestShare to EmailPrint this page

On Friday, Sept. 23, more than 70 students in Lakeside's drama program broke from their normal schedules to delve into the craft of acting and theater. The daylong retreat, organized by drama teachers Alban Dennis and Michael Place, brought together students at all levels and provided an intense, collaborative experience.

This year's program built on the success of last year's inaugural retreat. "Last year, we found that the experience was incredibly valuable to the success of what we did in class, in productions, and in the general feeling surrounding the program," said Dennis. The design of this year's retreat evolved so that returning students gain new skills, while newer students to the program are able to experience foundational lessons. Based on feedback from students, Dennis added dance and improv while keeping movement in the lineup. Through the morning and early afternoon, groups of students cycled between classes in McKay Chapel, the mat room in the athletics center, and St. Nicholas Hall. Groups were multigrade, with the seniors helping mentor and work with younger students. 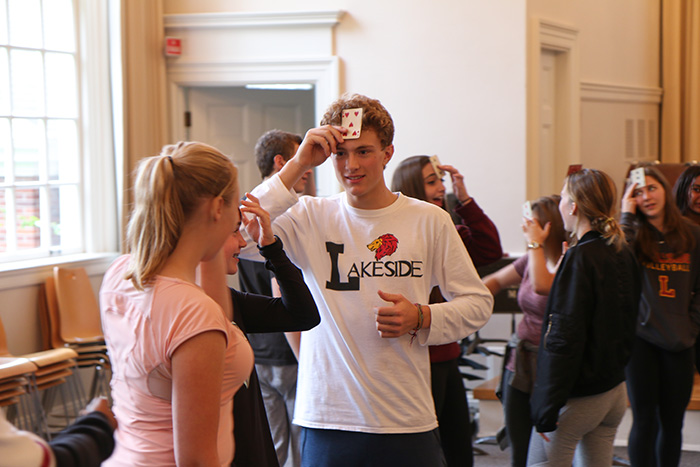 In Andrew McMasters's improv class, students engaged in a series of quick-moving improv exercises. McMasters, founder and executive director of Jet City Improv, regularly works with CEO and business leaders who want to improve their verbal and nonverbal communication skills.

"Take a card," said McMasters at the start of one exercise, as he handed out playing cards from a deck. "Now put it on your forehead." Students were told to pretend they're at a party; people with high cards – an ace, a king or queen – are the most desirable people with whom to speak (think CEOs), said McMasters, while those with the lowest numbers are the equivalent of interns. After a few minutes of students fawning, ignoring, and literally begging for attention, McMasters asked them to line up based on what they think their number is based on how people treated them.

Lined up in a hierarchical row, students talked about their experience. "You could see on someone's face if they wanted to talk to you," said one student. Another added, "It was weird, because I wanted to spread people out [into smaller groupings], but I had no power." At the end of the session, McMasters summed up one of the main lessons from the class. "This is a status game. ... But people can only put a status on you if you allow them," he said, asserting that they have the power to choose how to be in a situation. "Put the ace in your pocket. You can choose to be that person. Remember that you're an ace." 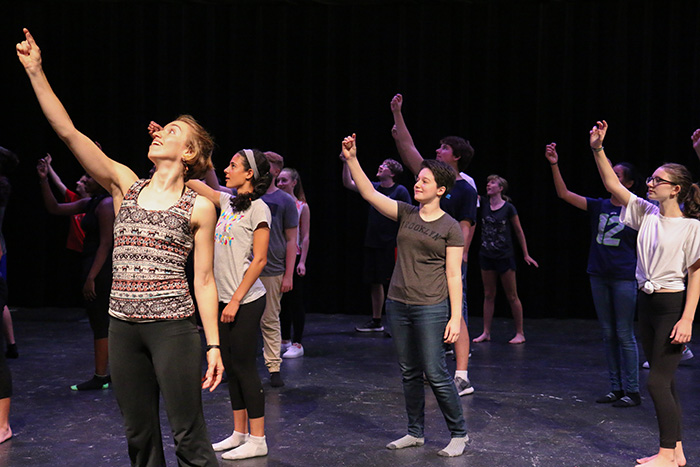 Onstage in St. Nicholas Hall, dancer and circus instructor Katheryn Reed led students in the dance sessions through yoga-inspired choreography. For students who want to do everything right the first time, it's a risky situation. At the beginning, they watch Reed and each other intently. But as the sequence progresses, some of them begin to come into their own interpretations of the movements. "Take ownership of your body," Reed reminded them. "What does it feel like to look a certain way?"

"We want our students to put themselves out there through movement and dance, and to recognize how hard it is," said Dennis, reflecting on the addition of dance to the curriculum. "We want them to be free enough to be expressive with their bodies." Senior Ella S. came away inspired by the session. "Katheryn says that you can do anything if you practice hard enough," she said. "At a certain point you start to believe it." 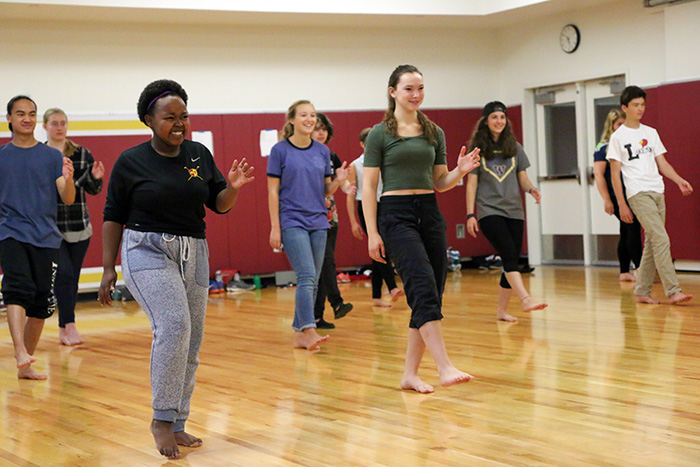 Across campus, in the athletics center's mat room, barefoot students walked around the room guided by the poetic cadences of Rhonda Soikowski, an actor, director, and teacher at Cornish College of the Arts. "Fill the space by moving toward the space," she tells them. Moving as a group to a particular tempo, students begin to experience themselves not only as individuals, but as an ensemble.

Soikowski takes the students through a series of exercises for their body, voice, and mind. In one, she asks students to make a perfect right angle with their feet – but without looking to confirm where their feet have landed. "It's either a right angle or it's not," she says. "What would happen if you took a test and your teacher never gave you a grade?" Students laugh in disbelief, but with their chins up, they move through different postures, lifting and placing their feet in deliberate movements.

Reflecting on the session, Sebastian A. '19 remarked, "It was really fun learning different techniques for expressing yourself: getting ready beforehand, releasing your emotions so you can be more prepared, and keeping an awareness of both of the entire group and yourself."

After a morning and early afternoon spent in workshops, the students gathered in the theater in St. Nicholas Hall to hear from Jason Sanford of Seattle Repertory Theatre. Sanford introduced the students to the work of playwright August Wilson, who is recognized as one of America's most influential American playwrights, and talked with students about the August Wilson Monologue Competition. Wilson is perhaps best known for writing the Century Cycle, a collection of 10 plays chronicling the African-American experience in the 20th century.

As students were introduced to monologues from Wilson's plays "The Piano Lesson" and "Jitney," Dennis mused on why he felt this session was important for students at Lakeside. "August Wilson is one of the great American playwrights... This is a way for all of us to appreciate his words and the importance of his work." Asked what they're seeing in the text, students note the yearning, anger, grief, and courage that emerge from the characters' words.

As the group of students recited the monologues they've chosen, they cycled through emotions, actions, and techniques dictated by cards placed in front of them. Cold reading – learning to act and read at the same time – is a valuable skill, remarked Dennis. "It's making instant choices ... about circumstances, character, and intention." 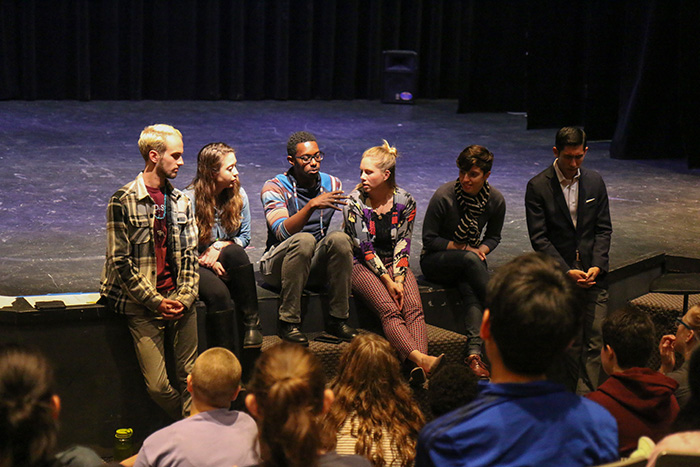 Reflections on the day

The day closed with a panel of recent Lakeside alumni who shared how their drama experience at Lakeside has informed their lives. Graeme Aegerter '11, Maia Nowack '12, Alexander Oki '08, Devon Thorsell '09, and Maile Wong '11, and Dimitri Woods '09 talked about how the program helped them build skills in listening and public-speaking, as well as their overall confidence. Several of the alumni talked about how taking risks on stage made it possible for them to be confident in taking risks elsewhere in their life. Alexander Oki reminded the students of the opportunity ahead of them to be a patron of the arts – and that their knowledge of what it takes to create a work of art makes them an ideal audience member.

Before the panel, Dmitri Woods talked about how a Lakeside drama production changed his path in life. "I auditioned on a whim during senior year," he said. "It was a bug that everyone talks about." Woods went to college planning on pursuing pre-med. But he was drawn back to the theater, where a professor encouraged him to pursue a career in theater. Woods is currently finishing his MFA in acting at the University of South Carolina and is a working actor in Seattle, where he still regularly checks in with Dennis. "A lot of the learning you do in acting is so hands-on... you can't just read a textbook," he said. "You have to experience it for yourself and then figure out your own path to it."

Students left the day inspired. "It's the best day of the year!" said Emma R. '17. "It's a great time to work on your skills and get to know people in the drama program. This department is special ... it's become my home at this school."

Takeaways from students leaving the improv class included being more spontaneous; focusing on relationships; what matters is the group; knowing when enough is enough; being present; and paying attention to everything that's going on around you.

The concept of theater training proving applicable for everything in life was echoed by several students and teachers throughout the day. "Drama teaches people to be empathetic. It's as plain and simple as that," said Jack D.'17, reflecting on his experience in the program. "Through becoming another person you begin to know other people and you begin to know yourself... [The program has] taught me many things: to be a better person; to really interact with people; to be able to help them... To really let yourself go and be who you are."
Powered by Finalsite