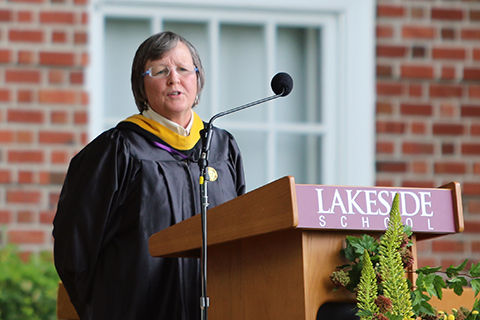 Tamra Patton receives Distinguished Service Award
Jun 14 2018 4:38 PM
Share to FacebookShare to TwitterShare to Google+Share to LinkedInShare to PinterestShare to EmailPrint this page

The Lakeside Board of Trustees is delighted to honor Head Athletics Trainer Tamra Patton with the Willard J. Wright '32 Distinguished Service Award. To Lakeside's great benefit for 28 years, she has shared a unique skill set as part healer, part teacher, part administrator, part counselor, and part coach. Her service is legendary among students and adults alike, who all rely on the wisdom and care given selflessly by Tamra.

A relative pioneer in the field of sports medicine, she came to Lakeside with a track record established at such universities as San Jose State, where she was the youngest person in the U.S. to hold her position at the time. She served similar roles at Gonzaga, Seattle University, and Seattle Pacific, but it was subsequent work establishing school training rooms that, luckily for us, brought her to Lakeside. The Washington Interscholastic Activities Association had recently required member schools to have a certified trainer on staff, and Tamra joined Lakeside in that capacity, working alongside iconic strength coach Harry Swetnam. It was amazing to see how quickly the friendship and respect developed between Harry and Tamra. Lakeside clearly had hired a winner in Tamra.

Fast forward to 2018, and imagine you are walking into the training room of The Paul G. Allen Athletics Center at about 3:15 p.m. any day of the school year. You are faced with the wildness and unbridled spirit of at least 20 student-athletes, all being treated or wanting to be evaluated. Tamra and her assistant athletic trainers are on high alert, eager to provide outstanding care. Tamra connects in meaningful ways, daily, with more students than probably anyone else at the school. She might be coaching them in their rehab or prehab, managing a concussion, or applying another carefully refined technique, always in tandem with her highly attuned listening. During busy days and long nights supporting Lakeside's athletes, Tamra embodies other attributes essential to her role as a trainer: She is a truth teller who gives everyone the benefit of the doubt and the benefit of her high expectations. Her no-nonsense approach is part of her charm: She cares but does not coddle. And it is her ability to care for kids physically while pushing them to stay engaged mentally with the team that makes her a coach's dream.

In addition to blessing us with her invaluable talent as a trainer, Tamra has stepped in to fill other needs, such as teaching effective first aid courses and developing a class to teach students how to be a physical trainer, exposing them to the complexities of her field. Over the course of her career, she has taught physical education and been a critical and cherished member of the Student Support Team and a significant resource for the school's Medical Advisory Board.

Tamra leaves an enduring legacy of dedication to Lakeside, its student-athletes, and its athletics programs that sets the bar high for whoever follows her.

For her outstanding service to Lakeside School, the Lakeside Board of Trustees today honors Tamra Patton with the Willard J. Wright '32 Distinguished Service Award.