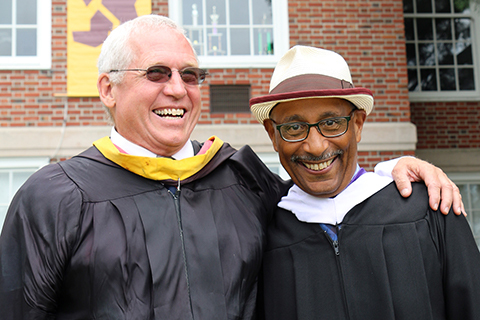 At Commencement 2019, three members of the Lakeside community received the Willard J. Wright '32 Distinguished Service Award. The Lakeside Board of Trustees gives this award to those who have rendered extraordinary service to the school—revered teachers, heads of school, exceptional staff, and trustees whose work was transforming for Lakeside.

Bertrand Valdman, the chair of Lakeside's Board of Trustees, read the following citations. Read the acceptance speeches from Bob Henry and Chip Mehring on the blogs and reflections webpage.

The Lakeside Board of Trustees celebrates Bob Henry as a recipient of the Willard J. Wright '32 Distinguished Service Award. Bob lived life fully before Lakeside – in construction, bookselling, radio, television, and in diversity work. Perhaps walking in the shoes of many is what enabled him to connect so meaningfully with students and made him such an outstanding teacher. Undeniably, these early career experiences, along with Bob's lifelong love of music (such as rhythm and blues and cool jazz); of things that go fast (such as motorcycles and cool cars); of gardening in community; and, topping the list, his love of family, profoundly enriched Bob's 31 years of inspirational teaching.

Bob has taught and advised at most every grade level at Lakeside. Unwavering in his devotion to each student, he was known as a walking, talking intensive care unit for Middle School advisees in need of his particular approach. Like no one else, Bob leavened discipline and rigor with joy and understanding in ways that students could and would take to heart. His distinctive style of mentoring reached equally well into the hearts of colleagues. Said a midcareer history teacher, "You always feel like Mr. Henry is in your corner, even if he's telling you you've got it all wrong. He is, in the most profound sense, always there for all of us."

Bob's colleagues have loved his work ethic, the model of decency he set, and that he demonstrated professionalism, kindness, and grace, even when confronting the toughest of questions. In the classroom, Bob always put a unique spin on the questions he asked and engaged students creatively in the big issues of the day. For an Upper School elective on the pivotal year of 1968, Bob assembled panels of experts on various issues and events, with each panelist articulating their perspective on sometimes divisive questions. There is no better way to show students that historical issues always have more than one perspective to consider.

Bob's teaching had all the elements of jazz, including improvisational elements that made his classes fun. An early adopter of new technology, Bob prepared students for the future when he broke ground with new, interdisciplinary curriculum for 8th graders at the launch of the laptop program. And mindful that even smart, talented, and driven high school students need to have fun, he was known for turning the last five minutes of history class into a dance party, introducing students to the magic of Motown.

For his outstanding service to Lakeside School, the Lakeside Board of Trustees honors Bob Henry with the Willard J. Wright '32 Distinguished Service Award.

In presenting to Chip Mehring the Willard J. Wright '32 Distinguished Service Award, the Lakeside Board of Trustees honors a master teacher who has given more than 35 years of remarkable service, the majority in the outdoors, to Lakeside School and its community.

Chip has led thousands of middle and high school students into the wilderness in his time at Lakeside, taking many on their first foray into a realm that would become a persistent and guiding force in their lives. For decades, Chip has shared his great wealth of knowledge and his passion with countless students and faculty members, generously giving them all the benefit of his unending patience; authentic caring; broad and deep expertise in wilderness travel; flawless attention to detail, safety and efficiency; and prodigious storytelling prowess. The joy and majesty of the outdoors that Chip revealed to them made an indelible impression.

When Chip packed his pickup truck for the road trip from Colorado to Seattle in 1984, neither he nor we knew the profound impact he would have on Lakeside and everyone associated with it over the next three and a half decades.

Alumni of his thoroughly planned and meticulously executed program have gone on to be leaders in every field imaginable, including his own, using the leadership skills Chip first taught them: collaboration, problem-solving, selflessness, endurance, courage. Whether he was teaching the skills and pleasures of camp cooking, sleeping outdoors, navigating a Utah river or the waters of the Puget Sound, summiting a Cascade volcano, cycling Lopez Island, or Nordic skiing, Chip did it all with gusto and an extraordinary attention to the art and science of outdoor education and group dynamics. And he did this with a record of safety that is unmatched in the industry.

Chip has spent literally years of his life sleeping on the ground in the name of showing Lakeside students the wonders of the outdoors. Take, for example, his overnights on Quest, the spring senior elective that includes a three-week canoe trip on the Green River in Utah. His 36 Quest trips alone constitute to two full years – 108 weeks, 24/7 – of sleeping on the ground in the desert wilderness. To say nothing of the daylight hours, full of difficult and exacting circumstances, from punishing hikes, to howling snowstorms, to long, hot days, to hurricane force winds, as recalled by a co-leader who also observed there is only a single roadhead along the 110 miles of river.

Chip is an unsung hero, serving the school quietly yet profoundly, with integrity and humility. Said a nominating Lakeside colleague, "I can't imagine a more deserving candidate. I really can't." And we agree. For outstanding service to Lakeside School, the Lakeside Board of Trustees today honors Chip Mehring with the Willard J. Wright '32 Distinguished Service Award.

In this posthumous presentation of the Willard J. Wright '32 Distinguished Service Award to Paul G. Allen, class of 1971, the Lakeside Board of Trustees honors the life of an imaginative and dynamic student and the work of a creative entrepreneur, someone whose vision, commitment, and compassion have transformed lives around the world.

In his devotion to brain research, sports, the environment, education, and the arts, Paul exemplified the school's mission, contributing wisdom, compassion, and leadership to a global society. He devoted his energy and resources to making the world a better place for others.

As a young and spirited Lakeside student, Paul channeled some of his energy into experimental devices, such as a chair wired to shoot off sparks when an opposing team's mascot took the seat. And some went into his science fiction stories, such as "The Hole," whose protagonist would make billions through a business partnership using new technology to provide a portal to another dimension. Paul published that little-known story in Lakeside's 1966-1967 Literary Gazette. Better known is his collaboration with fellow student and friend Bill Gates, logging on a school teletype terminal the 10,000 practice hours that gave them their start in computing and subsequently led to the personal computer revolution. Although few on the faculty understood what Paul and Bill were doing during those hours, when they designed the school's first computerized class schedule, all quickly appreciated the value of their work.

Much has happened since that computerized class schedule. In the mid-1980s, Lakeside trustees were grappling with the school's needs for math and science facilities. Paul and his fellow alumnus, Bill, encouraged our efforts to improve opportunities for a new generation of math and science students. In 1987, we dedicated Allen-Gates Hall, donated to the school by Paul and Bill.

Some 15 years later, when most schools were trying to wrap their minds around what a technology program should be and how it would physically work, Paul shared his Vulcan team's expertise and established an endowment that has fully funded our technology efforts since 2002. We will forever be grateful that at that moment, he gave his visionary support to our evolving technology program.

The Paul G. Allen Athletics Center has been a game changer for our athletics teams, their coaches, and the Lakeside community. Along with others in our community, Paul was a generous supporter. We were so pleased that he cut the ribbon when the building opened in 2014 before a crowd of 1,000 students, families, trustees, employees, and fellow alumni; and even more delighted to see how moved he was when the students gave him a spontaneous ovation.

Through his loyal and generous support, Paul advanced the mission of Lakeside School. We are grateful for his service and proud to call him an alumnus. For his outstanding service to Lakeside School, the Lakeside Board of Trustees today honors Paul Allen with the Willard J. Wright '32 Distinguished Service Award.