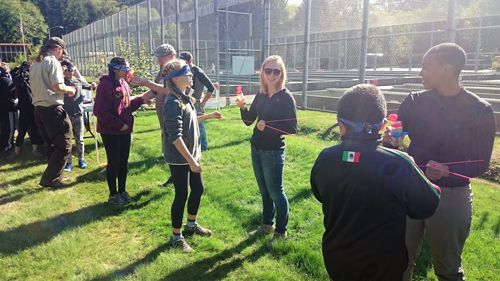 8th-grade GSL: Salmon and service
Share to FacebookShare to TwitterShare to LinkedInShare to PinterestShare to EmailPrint this page
Oct 5 2017

Today we woke up a little bit later, around seven, and had a delicious breakfast of cereal, oatmeal, and mini bagels. Our arrival time at the school was about 9 o’clock am. We played some games with our service groups from yesterday in a classroom and were off to the fish hatchery.

When we arrived at the fish hatchery, we were welcomed at the front by tall metal fences with a metal net covering the concrete fish raceways. We went inside into a little house with information about how the tribes lived off of the fish, how the different salmon are raised, and many statistics on the fish (for example: jump heights of each of the salmon). When our guides came and met us, we combined our service groups into two bigger groups, and we departed, the other group going in the reverse direction. On our tour around the hatchery, we were first taken to the small dam, and then were shown to the place where they sort the males and females out, as well as males that are smaller called “jacks.” Then we were shown the incubators, which could hold anywhere from ten thousand to a million eggs. We then visited the fish ladder, where our guide uncovered a section of the ladder where there was a two-foot-high gap for fish to move up. Concluding the tour, we were shown the raceways for the fish, where they would stay and wait for their release time after winter. There we had fun grabbing cups of fish food and throwing the food, watching the fish all swim up and make a big splash!

After the tour, we then went to watch another guide dissect the salmon. The dissection was very bloody, and we got to see the different guts of the fish. The ratios of the sizes of the organs in the body of the fish was a surprise. We also learned that when the salmon return to the rivers, they can identify which river is theirs because their smell is about a million times stronger than a human’s smell. We then played a game to simulate returning to the river, and we all got into the right “rivers.” After having lots of fun, we then all grouped up and got on the bus to head over to the service site.

When we arrived at the service site, we returned to the location we started at yesterday, and were then introduced to our daily jobs. This is when we grabbed our helmets and tools, and each group went to their separate areas. My group, comprised of Dominic, Mariner, Mackenzie, a kid from Quinault Lake School named Dakota, and myself, Justin, were led by our group leader Megan to the base of a steep hill. We had to clean up the trail to make walking up and down much more pleasant and to improve overall safety. Our caravan of cutting was led by Mackenzie and Mariner, and the rest of us were evenly spread throughout the trail behind them. After a while we had arrived to a bridge, which was our boundary, and on our way back down the hill, we cleaned up any remaining overgrowth and played some bonding games, such as two truths and a lie. According to other groups, they too were very effective in their trail restoration, while still making serious and joking conversations. After returning our gear to the providers, we hopped on the bus to return to the school, and eventually returned to the warmth of the house.

We are currently at the house and waiting to cook a dinner of stir fry. After dinner, we plan on having a campfire and s’mores and Mr. E. will probably tell another scary story. Today was an eventful day, and we look forward to going to the coast for more adventures tomorrow!