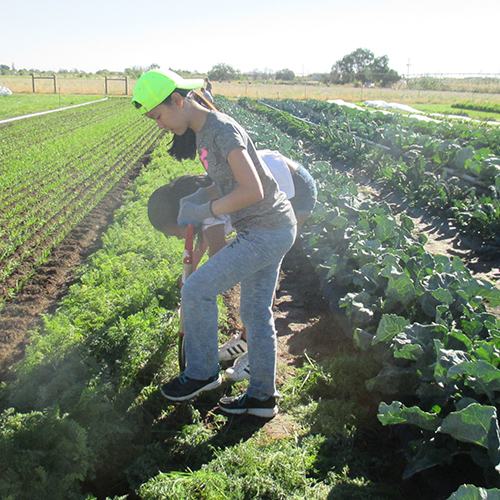 After their 8th-grade GSL experiences, students wrote reflections as part of their life skills class, including what they expected they would experience and what they actually experienced. This blog has been slightly condensed for length.

A pre-trip bias that I held about the city of Ephrata and Cloudview Farm was that the farm was ... pretty big, and a lot of people lived off the food they grew there. I didn't really think about if their lives would be difficult, and how different they would be from ours, but I found out a lot about this during the trip.

First off, the farm was not as big as I had imagined, but they did grow a lot of food, and a variety. The way people lived in their community and how the farmers lived was quite different than the way I think Lakeside students live.

The first important difference and event I experienced while working at the farm was when the gleaners came. Gleaners are people who come to harvest the extra food the farm grows. Often, the people who come are seniors, and need help to harvest. This time, the gleaners were harvesting carrots, and we were helping them after becoming carrot-harvesting experts (we had harvested 400 pounds of carrots earlier that day.) They took home a lot of carrots, and I thought that I had never had to get food like this. If I wanted to eat carrots, or anything for that matter, I could drive about two minutes to the nearest QFC. These people either didn't have the resources and availability to so easily obtain what they needed for that week, or that month. I remember seeing all the people coming, carrying empty crates, and leaving, carrying full crates. It was somewhat like shopping, but at a farm, and needing to pick the food they need.

Another big thing I observed ... was the food bank. It's not that we don't have food banks in Seattle... but I've never really thought about how small cities and towns could also have such a food shortage problem. Cloudview Farm donates a lot of their extra food to the food bank, including all of the extra carrots we had harvested. In the food bank, I saw a lot of people who needed the food, and they would all get a certain amount in a box based on the size of their family. And it wasn't just food that people needed, they also were provided with toiletries, and certain extra things for the holidays. Again, seeing things like this gives you a greater appreciation for what we have readily available to us.

...I realized how important the farm was in this community, and that people did oftentimes live off of the produce the farm grew. Whether it was from the gleaning, food bank donations, or CSA boxes, there were so many people the farm helped. I found out about the hunger problems a small city or town may have, and this was especially interesting because I had never thought about these kind of places having these problems. After this trip, I realized how important all people in a community are and how privileged we are to have all the things that we need.