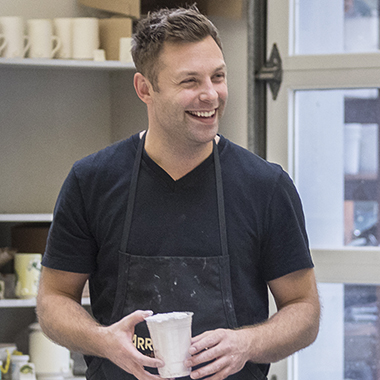 The visual arts faculty group show is an annual teaching tool — a way to model for our students and community the creative process that culminates in an art exhibit. This year I made a series of sculptures and works on paper from start to finish in about two weeks with hopes of exposing our community to visible process.

I viewed this project as an opportunity to access creativity and share a little bit about how it works for me. I am currently in the middle of a creative deep dive and I wanted to demonstrate for students that I don’t always know what I’m doing with my work all of the time. There is a ton of process involved getting from one place in my work to the next.

I work in many ways and I wanted to try mixing it up. Normally, I start by sculpting clay and then make drawings inspired by the sculpture. In general, my work is intuitive and I refine a concept as it comes into the world. Then I find galleries or shows to exhibit finished works. But for this show in the Pigott Arts Center gallery, I worked backwards.

In the studio, my process began with 60-70 small studies using watercolor, ink, and paper materials (images 1, 2). Eventually, I projected the contours of 3D-modeled images of mannequin heads (that I found on the internet) at three different views: profile, three quarter, and frontal (3). I experimented, tested, and learned everything I could about them. I then scaled up and made a series of around 15 large-scale 2D works that would have an impact in our gallery space (4, 7). Essentially, I was going through the same thing that we ask students to do for their senior shows: I was creating a series, iterating, and editing.

The works on paper influenced how I approached my sculptures. I began with the same idealized form in three dimensions (mannequin head) and made a plaster mold for casting clay (5). While I will eventually glaze the seven heads with a black and mirrored finish, I decided to leave them as fragile, raw, unfired objects for the duration of the exhibit (6, 8). That decision — along with several others — was the product of conversations I had with students during the process.

This exhibit began with a raw idea that probes at idealism and fragmentation in contemporary culture. The initial concept began in 2013, after noticing the impacts of social media as it relates to being in the physical present. Now, in 2017, that feels super relevant.

As I told students, it can take up to several years to grasp the outcome of a plunge into the creative unknown. I don’t know everything about this work but I believe in it and I know it is the start of something bigger that I will continue to explore. In my mind, I am expressing something I see in our world right now and I am suggesting dualities such as “important” and “isolated,” “perfect” and “imperfect,” “human” and “non-human,” “connected” and “fragmented.” Now I wonder if my idea has turned into something else. Now I have more ideas than I started with.