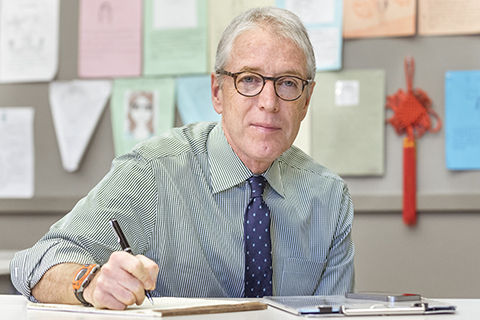 At the end of September, Lakeside hosted a conversation between Republican pundit and former Bush advisor Karl Rove and former Democratic presidential candidate and Democratic National Committee Chair Howard Dean. It was a civil exchange in an often uncivil election season and our students were able to witness two informed individuals with vastly different views respectfully disagree on the issues of the day.

In the many conversations I had with students following the morning assembly, I was struck by how much they appreciated the civility of the conversation between these two men and also by their recognition that holding a different view from another does not mean that person is your enemy. This generation of students is growing up in an era of rancorous partisan politics and declining standards of public behavior, yet the students I spoke with almost intuitively understand that we all need to be open to views that might differ from our own, even if in the end we strongly disagree with those views.

While I do not want to appear Pollyannaish, I do want to say that I find a high level of respect, civility, and trust among our students. I do see them, by and large, living the values of the school. In this sadly uncivil time I do find it encouraging and hopeful that the current generation of students does want a more civil society. I believe that down the road, when they are in public life, they will do a better job than my generation has of seeking common ground with their fellow citizens!

In her small but powerful book "Not for Profit: Why Democracy Needs the Humanities," University of Chicago philosopher Martha Nussbaum writes, "When we meet in society, if we have not learned to see both self and the other in that way (as individuals meriting our concern), imagining in one another inner faculties of thought and emotion, democracy is bound to fail, because democracy is built upon respect and concern, and these in turn are built upon the ability to see other people as human beings, not simply as objects."

Lakeside School is not a utopia but from the day I arrived on campus 18 years ago, I have been struck by the high level of respect students have for one another and the adults in the community and how much that respect is reciprocated by adults. This high level of respect manifests in many different contexts at school. For example, I recently sat in on a bioethics class in the Upper School and watched as juniors and seniors presented the case for and against the sale of human organs. What attracted my attention most was not the arguments made but how carefully everyone listened to the views of their classmates, how seriously they took opposing arguments, and how willing they were to consider the other side and maybe even change their views.

In a 5th-grade digital life class I am sitting in on each week, I see the students help one another and work together cooperatively on projects. They listen carefully to one another and contribute toward a collaborative outcome. And candidates who interview at the school often remark to me, after a day on campus, how helpful the students were to them and how carefully they listened to what the candidate said. I can still remember that when I was interviewing, students got up from where they were sitting to wish me luck. It made an impression.

One of Frank Moran's values when he founded Lakeside School in 1919 was consideration for others, and 97 years later that value very much lives on in the school. I believe our students will carry this value out into the world and, in doing so, make our country and world a better place for everyone.

Have a great late autumn. I will see you all at games and performances!

Bernie Noe is Lakeside's head of school. Reach him at Head'sOffice@lakesideschool.org or 206-440-2714.