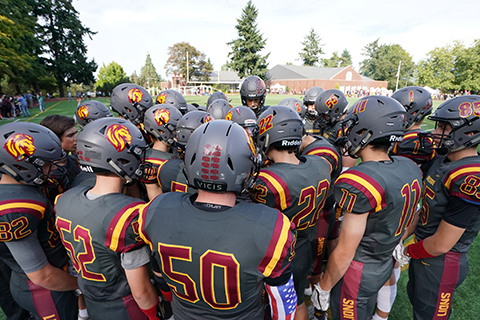 The work to make the 2017 Lakeside football season go began last November, when the 2016 season ended. Included on the to-do list: increase our roster size, revamp our philosophy and theme, put together an almost entirely new coaching staff, and lay out the processes that would guide us through the long season. We expected the work would get done. But what we got out of it was more than any of us could imagine, thanks to the help of many groups and individuals that played important roles behind-the-scenes.

Atavus
Let’s face it: It’s the tackling that makes football scary. But there’s a trend happening across the country at all levels of the game: the introduction of a safer, more efficient rugby-based style of tackling. You know, rugby – the sport that kind of looks like football, but without shoulder pads or helmets. Atavus, a Seattle-based company that offers lessons, analytics, and oversight of rugby-style tackling, leads the charge of implementing rugby-tackling into football. They work with clients like the Universities of Washington, Nebraska, and Ohio State, and now Lakeside School. We got our foot in the door when the company was starting out a few years ago, and implemented a full-on partnership with them this year. Staff members from Atavus come to practices and games, watch our game film, and offer deep analytics about the effectiveness, safety, and efficiency of our tackling, then write reports on the drills we can use to improve in those areas. Probably the most important benefit is the confidence our athletes have in their ability to make tackles. 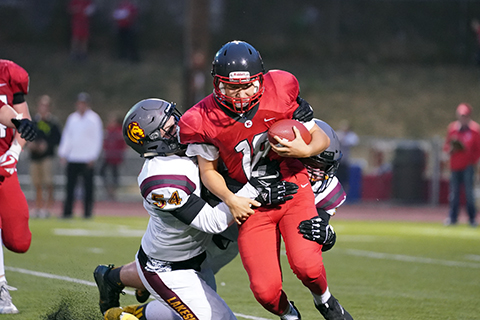 Student managers/statisticians
Football is starting to move more and more into a statistics-based game. Lakeside football recognized that early, and has utilized the talents and efforts of students here at Lakeside to make sure we’re using statistics to help us improve. Seniors Iman L. and Sydney H. have been our student managers since their sophomore year, keeping real-time statistics of our games, helping organize our practice schedules, and live-tweeting our games. Why is any of that important? Well, after a week of practice that they helped organize, when it’s the second quarter of that week’s game, and we’re on the opposite 45-yard line, and it’s 2nd-and-4, and our runningback carries the ball for 13 yards on a zone-read play, Iman and Sydney log that from our sideline and tweet it to our fans following along on Twitter. We take that information into halftime, analyze it, and use it later in the game in case we’re in a similar situation. We’ve also received help from Carl S. ’19. For this season, he took four years of the football team’s game data, crunched it, plugged it into a computer program that he wrote, and turned out a chart that helps us break down important game-time situations: Should we onside kick? Should we punt? Should we go for two? That chart helped us earn a victory in the second week of our season, when, towards the end of the game, we boldly decided not to punt in an otherwise “must punt” situation – instead, we ended up getting a first down, and put together the game-winning drive. Thanks to the efforts of our student managers and statisticians, our team is operating at the highest, most up-to-date level possible.

Dr. Kevin Alschuler, Alschuler Psychology
Even coaches need coaching, and we were fortunate that Dr. Kevin Alschuler, a Seattle-based performance psychologist, reached out and asked how he could help our team. Dr. Alschuler brings a long history of working with high school and collegiate athletics programs, helping them to craft and implement messaging, increase performance and confidence, and improve coaching skills. In the offseason, he helped us design and craft a messaging template by which we could begin to develop our theme and key phrases for the season (more on that later). Now, he comes to practices and games and listens in on the communication between coaches and players, and reports back to us about what worked or didn’t work, what methods and approaches can be used or improved upon, and how we, as a staff, can stay consistent in our messaging. Aside from that, the coaching staff meets with him once a week away from Lakeside to turn his notes and observations into a plan of action for the coming week.

Jaime Pollitte, Mountain Madness
After meeting with Dr. Alschuler about our messaging, it was time to implement a theme. For most of my life, I’ve been a fan of books about mountaineering and adventure, and I began to notice a theme in both that style of literature and coaching high school sports: valuing the process over the product. Too often in high school sports, coaches and athletes can be overly focused on winning the game or making the playoffs that they lose sight of what they’re doing in the moment. Similarly, in adventure literature, thinking too much about your destination can cause missteps in the journey that result in never reaching the destination. With that in mind, I reached out to Jaime Pollitte of Mountain Madness, a Seattle-based mountain climbing guide service, about speaking to our players about those similarities. From my conversations with him, we came up with our theme: “ASCEND,” which reminds our players that although there is indeed an end to this mountain of a season, we’re focusing on the ascent, or the journey. Jaime came to our team retreat at Fort Casey to give a presentation on his experiences in mountain climbing, and to present our theme. Later, Mountain Madness gifted the team a maroon and gold ice axe, which is given to one player each week who represented and showed the characteristics of our theme. That player leads us onto the field at the game that week with the axe in hand, a symbol for all to see – that we value the ascent, not the summit. 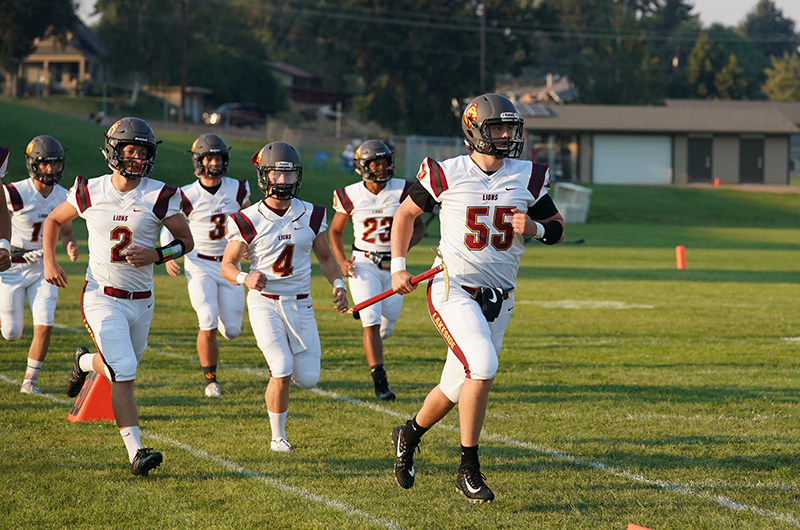 Thomas B. '18 leads the Lions onto the field with an ice axe that represents the team's motto, "ASCEND."

Clayton Christy, athletics photographer
The photos used in this blog were taken by Clayton Christy, Lakeside’s in-house athletics photographer. He puts in hours and hours of work being on the sidelines for all of Lakeside’s athletic teams to collect these amazing photographs. Our student-athletes take pride in the effort and commitment they put into their program, and it’s rewarding for them (and their families) to see themselves in action. His photos get used in numerous digital and print publications from Lakeside School, and are plastered all over social media once our kids get their hands on them. 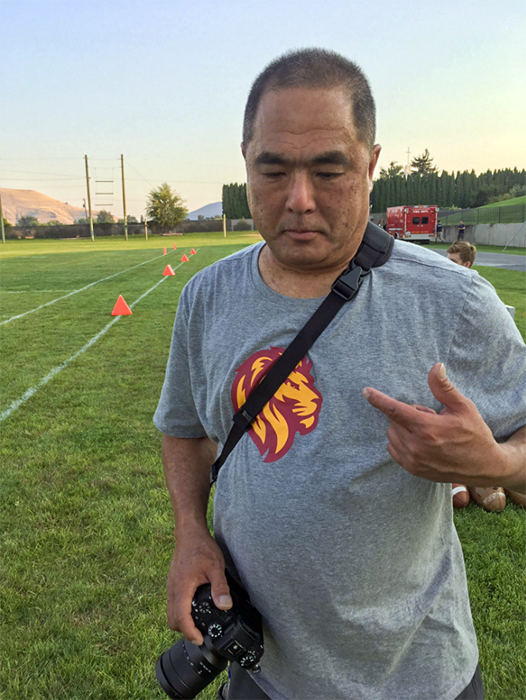 Student section
For each of our games (with the exception of one that was nowhere near Seattle), we’ve had a huge student section behind our bench. I’ve coached at Lakeside for seven years, and for some reason, this year’s student section seems larger and more engaged than ever before. They have clever chants for almost every one of our players, wear crazy maroon and gold outfits, hold up well-designed and hilarious signs for our team, and make their presence known even at away games. In the second week of our season, we were in a back-and-forth game with a rival opponent, and in the biggest moments of the game, our student section would come to life, yelling, stomping, clapping, and cheering. That kind of support brings energy and confidence to our team, and drives the will to perform at a high level.

Parents and guardians
Our season wouldn’t be possible without the support of the parents and guardians of our athletes. Aside from being there to show their support during varsity and JV games, they’re keeping students healthy and engaged at home, keeping them accountable with their time and commitments, and providing the positive support they need to know what they’re doing is worthwhile. On top of that, they reinforce the messaging that comes from the football field at home, which helps turn our athletes into better people off the field.

There’s a lot more to our team than what’s listed on the roster. I hope you’ll come see us at a game this season, or follow us on Twitter (thanks to Sydney and Iman!) at @LakesideLionsFB.