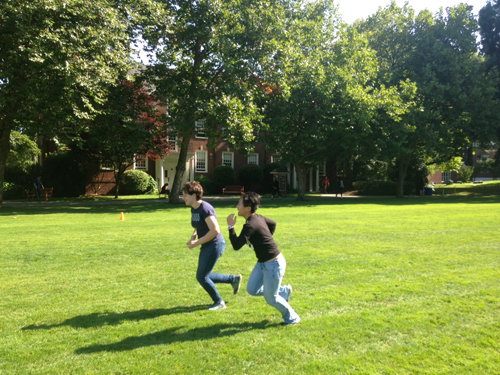 On Sept. 22, more than 80 students in Lakeside's Upper School drama program broke from their normal schedules to delve into the craft of acting and theater. The daylong retreat brought together students at all levels and provided an intense, collaborative experience. Here, two students share their thoughts about the retreat. Pictured above: students run while constructing a storyline.

Theater kids everywhere have a (mostly undeserved) reputation for drama. In some situations, we can be competitive, backstabbing, and just a little bit catty, but from the moment I walked into the chapel on the first day of freshman year at Lakeside, I felt completely and utterly supported. During the drama retreat that year, I met and connected with seniors who would inspire me until they graduated, made friends who would be instrumental in the way I thought about both life and art, and started to learn to trust in my own creativity. Certainly, when we arrived in St. Nicks that morning, I was nervous about everything – the viewpointing, the Suzuki method, the Laban movement analysis, and most of all the highly competent upperclassmen who somehow understood all of it – but by the next day, I was spending free periods in the drama office and prepping to audition for “Pronoun,” the fall play that year. In sophomore and junior year, I was the one urging freshman to swing by to hang out with the rest of the theater geeks during lunch, audition for shows, and most importantly, give things a shot.

The drama retreat is only one day, and over the course of it, each group has only about an hour and a half with each instructor, so in order to get the most out of the experience, you have to throw yourself into it. You have to learn to try things without thinking, be spontaneous, let yourself go without fear of judgement, all of which takes an enormous amount of mutual trust. There’s a kind of energy that’s created during the retreat, and it carries through the entire year – a willingness to make choices and forgive mistakes, and a conviction that those around you will do the same.

For me, theater is an act of radical trust, of having faith in your audience, faith in yourself, and faith in your castmates. I’m still working on discovering that confidence, and I think I probably always will be, but without that moment of connection at the beginning of my freshman year, I can’t imagine how long it would’ve taken me to break down my own barriers and take the leap of faith required for an honest performance.

Coming into my second year of drama at Lakeside, and my second drama retreat, I was excited to socialize with friends in other grades, meet new people, and stretch my acting abilities. Each year, three professional instructors come and teach separate, new concepts to all the drama students that are incredibly informative of how professional actors proceed through their work. They can be funny, tough, instructive, and often a little bit of all three. Even if you’ve studied a concept before, it’s still fun to dive back in and explore it in more depth.

A highlight of this year was the work we did in stage combat. While the entire point of stage combat is to make something fake look real while keeping your distance, you get very close to whoever you are fighting, and it was a great opportunity to make friends while throwing punches. By the end of the activity, it’s fair to say that I wasn’t an expert in stage combat, but I had a better foundation to build upon, and it was quite a lot of fun.

One of the more difficult but rewarding parts of the day came in the final activity I did. After a warm-up, we found partners and were instructed to go outside and start running and together find a story for why. Two people may have been running away from a giant monster or one may have been chasing the other and accusing them of a crime, there were limitless options. The running was meant to be an aid in helping us raise the stakes for the situation we were creating, to entice an audience.

When we came back, we shared what we had created and were coached on how to keep the tension in our mini-scenes high. Apart from the dreaded task of running, the difficulty lay in connecting with your partner non-verbally as each person sought to create a storyline without overpowering the other, while keeping the scene cohesive. Although tired at the end of the activity, I felt like I had a completely new viewpoint in how I saw scene work, and was very intrigued about extending the principles into what I do.