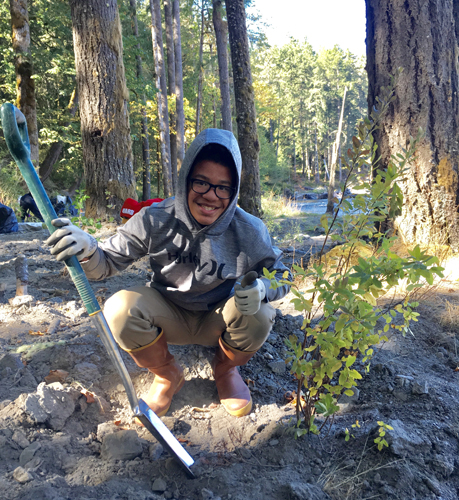 Lakeside’s 8th-grade Personal Development class prepares students for a weeklong GSL experience, during which they travel to rural locations throughout the Pacific Northwest to live and work alongside people in communities where issues of economy, environment, and culture intersect. As part of their preparation, students work to minimize their individual implicit and explicit biases through educating themselves about the community they’ll visit. “The premise is that increased education and exposure will help to address our biases and increase our capacity for empathy,” says teacher Meera Patankar.

Students begin the unit by reflecting on the “single story” concept explored by writer Chimamanda Ngozi Adichie. After their trip, they reflect on a “single story” they had before the trip, and how that changed.

I'll be honest, as we were getting on the ferry I was excited but had a deep-seated worry about what would happen when I got over to Elwha. I wasn't necessarily scared, I was just terrified of messing up. Let me explain this. I had a single story of the Native American Klallam we would encounter. I was really worried about encountering a different culture because I was concerned I would do something disrespectful accidentally. I wouldn't be able to the learn the language correctly. I would mess up in some way that would make them upset at me. Those were all fears I had. That the people we would be visiting would have really firm traditions that, if we did not follow them, would result in disaster. I was feeling really pressured to get everything correct – or face the consequences. That was my single story.

Now, when we got to the tribal center I was rather cautious. I didn't try to do anything out of the ordinary – I just walked quietly and calmly, trying not to do anything that could be remotely disrespectful. But when we were greeted with a warm smile I felt better. Maybe I didn't need to be so worried. Harmony passed out the sheets of paper. I had no idea what I was doing, and I was super hesitant to pronounce any of the words. I was terrified I’d mess them up and insult Harmony. But then, something magical happened. Harmony taught us the Klallam language. It was amazing. I know I was dreadful at Klallam, but she was still nice and continued to help me, even though my pronunciation was a hopeless case. It made me feel better. Maybe I didn't need to act so anxious after all, I thought. I was willing to take a risk.

Then the children came in. More worries. I didn’t want to do anything disrespectful to them. I didn’t know their language, and I didn’t want to disrespect any of their traditions. At first, I was cautious of the children. I didn’t speak any Klallam, or English, for that matter. In retrospect, this was ridiculous, but at the time it was a new culture with different traditions. People have their own culture and I’ve seen how easy that is to disrespect. But I took a risk. I tried to speak some Klallam to a couple of kids over near the table. It was dreadful, I’m sure. But the children didn’t mind. They were really nice about it, and pretty soon we had found a lot of common interests between us. Perhaps I could take risks around them without worrying about being disrespectful. And for the rest of the day, me and my new friends talked about Pokémon and played Plants vs. Zombies (a card game they invented that I am currently unable to decipher). There were no traditions, no strict, terrifying rules I had to be careful not to break. I could just be my normal, respectful self. It was the most fun I’d had in a while.

On the final day, there was a party, courtesy of us. When I first met the Klallam elder, a little bit of worry began to seep back in again. I’d met Harmony and the children, but what did I know about the elders? Would their rules be stricter? Would I end up doing something unforgivable? I hoped not, but I kind of suppressed myself and just acted in a way that ensured I wouldn’t say anything that might offend him. I didn’t take any risks. Later, as he was telling the story of the Tall People (which I really liked, by the way), my Schweppes soda was tasting a little bland, so I went and got some Stevia sweetener to put into it. Surprisingly, the entire can erupted onto the picnic table. Now you’ve done it, I thought. Fear gripped me like an icy hand. But there was no issue. He continued with his story. I was so surprised! I was sure what I had done had been terrible, and sat down where I was, fearful at what my fate would be. But I was not scolded, or reprimanded. It was just an honest mistake, and it wasn’t offensive.

Later, after cleaning up the spill, I had a realization. I realized that this idea of an easily offended set of traditions had been untrue. All I needed to do is be myself or else it would take away from my trip. I didn’t need to act anxious or be scared to take risks. They were really kind, and they were here to teach us, not scold us for doing things wrong. I felt so blessed to know people that accepted my mistakes so well. My single story was completely wrong. The Klallam were my friends, and the best thing I could do was to be myself. I learned so much, and it was because they were so forgiving. Every time I messed up, they told me what I could do to fix it in a super kind manner. This allowed me to take risks and learn from my mistakes. It made me feel confident. It made me feel joyous. And it made me feel like I was supported—that was the most amazing feeling I’d had the entire trip.