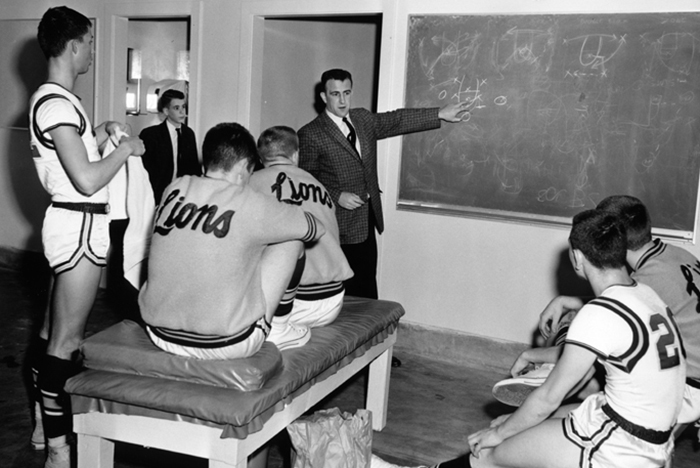 Coach Anderson: Game plan focuses on relationships
Share to FacebookShare to TwitterShare to LinkedInShare to PinterestShare to EmailPrint this page
Oct 20 2017

Don Anderson, Lakeside’s athletic director from 1956 to 1968, and personal hero for many of the students he coached, agreed to sit down with one of his former players, Bruce Bailey ’59, last April and share his memories for Lakeside’s Jane Carlson Williams ’60 Archives. Bailey had played both football and basketball for Anderson. In Bailey’s own oral history recorded for the archives, he talked about his coach as being “a big part of the class’s memories.”

What was it that made Anderson a legend among the students he coached?

He led Lakeside’s football team to unprecedented successes: In his 12 seasons here, five were undefeated and the team lost a total of only 12 games. But wins were only part of the reason he was so admired.

His former players speak of his patience and keen leadership. They saw him as an approachable yet deeply respected mentor who built strong relationships with players that reached beyond Parsons field.

Even today, Anderson remembers the names of all the students he coached during his Lakeside tenure, which began nearly 60 years ago.

Bailey’s class dedicated its yearbook to him, noting how Anderson “gave us pride in ourselves and in our school” and thanking him for his “understanding of our other problems and his sincere desire to see us excel in all fields of school life.”

Writing about his experience as a student in the late 1950s and early 1960s, Tom Nicholson ’60 remembered that “no one came to Lakeside for the athletics. … We won because we so fervently believed in our coach.”

Even those not part of his teams felt his impact. In fact it was someone who never was coached by him, the late Nym Park ’64, who approached the archivist last year about the need to record an oral history with Anderson. Park understood what Anderson meant to so many of his classmates.

In 1968, Anderson left Lakeside to coach in Spokane for a semi-pro football team, the Spokane Shockers. Two years later, he went to coach the University of Northern Arizona’s football team. In 1973, he returned to Spokane as the head coach at Gonzaga Prep, retiring from there in 1997.

His time at Lakeside marked the beginning of what would be a 40-year career in coaching, and his work here foreshadowed an impressive career record of 263 wins, 60 losses and four ties. But when Bailey asked him what he was most proud of over the course of his coaching career, Anderson replied: “Relationships. The human part of it. That’s what I’m the most proud of.”