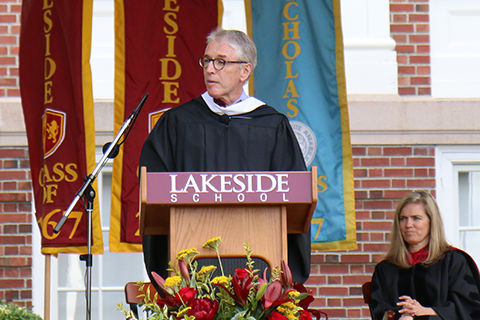 Commencement 2017: Advice to the Class of 2017
Share to FacebookShare to TwitterShare to LinkedInShare to PinterestShare to EmailPrint this page
Jun 9 2017

At the beginning of this school year I spoke to the entire student body about slowing their lives way down, even having days when they did nothing. I extolled the virtues of doing nothing and all that these seniors would gain from doing nothing.

I was confident that the wisdom I had gained from my three-month sabbatical, taken last year, would be instantly understood, appreciated, and adopted by everyone at Lakeside School. We would enter a Utopian period where we would all accomplish great things while at the same time being calm, centered, philosophical, joyful, and wise.

I was even more confident parents and guardians would love this message and almost immediately begin counseling their children to relax, to do less, to take only the courses they were truly interested in, and do whatever activities they were passionate about. To find joy in the day to day, to smell the flowers, and of course, not to worry about where they went to college for (within reason) we would all agree it did not really matter.

Personally, in this more relaxed period of Lakeside I planned to read more, to think great thoughts, and to flutter around campus drinking in the calm and joy of day-to-day life at the school, also noticing the flowers, the people, the creativity of everyone, and occasionally dispensing wisdom to anyone in need.

Well, it didn't turn out as I expected. The "just do nothing" message got very little traction. Upper School students in particular told me the school was busier than ever. And besides, many pointed out to me that there was just too much to do in life to slow down, much less do nothing. And then three weeks ago the New York Times decided to pile on with an editorial saying that living in the moment is just not the human condition; that we are creatures of foresight, that planning ahead and worrying about the future is what makes our species superior...

So, I've been re-thinking my "just do nothing" campaign. I get it: We are a community of motivated, goal-orientated individuals who want to do a lot in our lives. So on your way out the door, seniors, I want to try and reframe my point because I believe it will really matter in your lives, and in the lives of all of us here today.

Some of you may have seen the article in the newspaper a few weeks back about George Schultz, Secretary of State under President Ronald Reagan. Former Secretary Schultz is now 96 years old and looking back on his period as Secretary. He recalled how he spent 45 minutes a week in quiet reflection – just 45 minutes – a time that was only ever interrupted by calls from his wife or President Reagan. Secretary Schultz went on to say that those 45 minutes of reflection gave him the perspective he needed to address the complex global issues of his time: the collapse of the Soviet Union; the fall of the Berlin Wall; and the advent, at least for a time, of a unipolar world. Schultz was a busy man, a goal-oriented, future-focused man, but he understood that only by setting aside time weekly, (and daily would be even better), could he have the perspective he needed on events that were swirling around him.

My hope for you is that you will find the time each day for reflection, for connecting with your truest selves, so that all your doing and accomplishing and achieving will come from a grounded, deep place within you.

Theologian Howard Thurman wrote: "There is something in every one of us that waits and listens for the sound of the genuine within ourselves. It is the only true guide we will ever have. And if we cannot hear it (because you are unwilling to sit still for long enough to hear it) we will – all of our lives – spend our days on the ends of strings that someone else pulls."

You will live busy lives, where there is always more to do than you can find the time to do. Lives awash in information: big data; a continual news cycle; the Twittersphere; more articles and books to read on more topics than any of us can keep up with. And what is the danger of this for all of us? That we cannot make any sense of our lives, and, as a result, we fail to develop a perspective on what is important to us in life, on what really matters. We end up being less effective professionals, less effective citizens, less effective human beings.

For the past 35 years I have started every day with 30 to 40 minutes of quiet reflection. It is in this time that I gain perspective on the events that will fill my day, deciding which ones I think important and which ones less so. It is when I reflect on what I think is true and on the person I want to be. This time of reflection has not made me perfect and it has not prevented me from making mistakes but it has given me the peace of mind of doing my best to ground decisions in what I believe is truth.

A recent study at the University of Virginia revealed that 67 percent of men and 25 percent of women would rather endure an unpleasant electric shock than be alone in silence for 15 minutes.

Beginning this summer – even today, Class of 2017 – set aside time each day for quiet reflection. I promise that out of this brief period of reflection will come connection with your values and guidance for how you want to live your busy, goal-oriented lives. At a minimum it will be better than an electric shock!

My second piece of advice is that your greatest joy in life will come as you devote your many talents, activities, and accomplishments toward a purpose greater than yourselves. Hans Rosling, a man I have admired over the years, passed away this past February. Hans was a Swedish physician, an expert on global health, and a highly successful and sought-after speaker (a TED talk he gave in 2006 has been viewed by 11 million people).

But what was impressive about Hans was not the fame he achieved as a global health expert, or even his important analyses of world health issues, but his refusal to let his success isolate him from the very essence of his profession. In 2014 he canceled all of his speaking engagements (which were a major source of his income), and moved to Monrovia, Liberia to help with the Ebola outbreak. He knew his expertise was needed and wanted to help. In his words, when reflecting about the Ebola crisis, "those ain't numbers, they're people." Hans refused to let his own accomplishments, his success, and his privilege isolate him from those in need, isolate him from the very reason he became a doctor.

This past spring, I was in the city of Cartagena in Columbia, where I spent some time in a very poor neighborhood called Tierra Bomba visiting an afterschool program for children. A man in his late twenties named Pedro Salazar founded and directed the program. He was a cool guy! Cartegena is on the coast of Columbia and Pedro had moved to there to follow his passion for kitesurfing. Then he met some kids from Tierra Bomba and fell in love with those kids. He saw how desperate the conditions of their lives were, and how few resources were dedicated to their success in life. So, with no experience, he opened up an afterschool program where now some 250 children a day can enjoy themselves and continue their learning.

Pedro also taught some of the kids in the community center how to kitesurf and convinced a sports company to sponsor the kids in his program in international kitesurfing competitions where they are doing really well!

Pedro and the young volunteers who come from all over the world to work with him have infectious joy. They love what they are doing. It is deeply meaningful to them.

So, I have a challenge for all of you seniors. Next year, be successful and accomplished, follow your passions, AND get out into the community and get involved with making someone else's life better. Share your passions with those who may never have had the opportunity to play the piano, guitar, saxophone or trumpet, or make movies, or write and perform songs.

My final piece of advice to the busy, goal-oriented Class of 2017 has to do with time. Time is the commodity that busy, goal-oriented people always feel they do not have enough of. However successful we all become, we cannot manufacture or buy more time.

We busy, goal-oriented types often prioritize professional obligations over personal ones. We value our career success over human relations. We finish our email or an assignment before talking to a friend, even one in need. We convince ourselves that sometime down the road we will have time for others, but not right now. But as we all know, time in the future is not promised to any of us, even to the young. We must love now. We must forgive and let go of grudges now. We must prioritize relationships now. We must live in the way that really matters to us now.

So, Class of 2017, I wish you accomplished and active lives grounded in reflection, directed toward a purpose greater than yourselves, and with time invested in what matters most to you and in what brings you joy.

You graduate today with the love and respect of all present. We all look forward to the good work you will do to make the world a more just and equitable place for everyone.

Thank you for listening to me one last time.