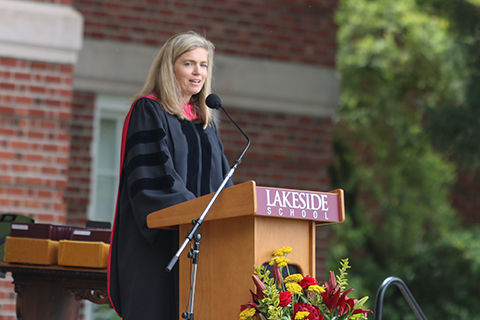 Commencement 2017: Stories, memories, and a word that captures it all
Share to FacebookShare to TwitterShare to LinkedInShare to PinterestShare to EmailPrint this page
Jun 8 2017

Sardines. When I think of you, Class of 2017, that is what I will remember – sardines.

For those of you who missed out on the great sardine event of 2017, let me explain. It is Lakeside's tradition that on the first day of spring semester, the senior class chooses a theme, dresses up, and then runs through campus celebrating the start of their senior spring. We have seen a number of cute themes over the years: senior citizens, birdwatchers, super heroes, Olympians...

This year's class? Sardines. Draped in tinfoil and all things silver and grey, they slithered through campus in schools of little fish, happily reminding us of their originality.

This would not be nearly so hilarious if it did not follow on various other quirky, bizarre, and just plain weird themes over the years.

There was the first day of senior year when you stood out on Red Square, welcoming the incoming freshmen with a cascade of candy. As is the tradition, you dressed for the occasion, choosing Greek gods and goddesses as your theme, no doubt simply for the fact that it allowed you to wear togas to school. This was cute – and not even all that weird – except that that you then spent the day debating amongst yourselves whether it was the Greeks or the Romans with whom togas originated.

And how about the last day of first semester when you sweetly and spontaneously gathered out on Red Square to applaud yourselves? Again, not all that strange – were it not for the tree climbing and name chanting.

But really, perhaps the only moment weirder than sardines was your theme for your winter ball. Other classes have gone with Gatsby. Or Hollywood. Or the 80's. The class of 2017? Earth tones. Your dance theme was earth tones.

Class of 2017, you defy definition. You have managed to make your senior year, and honestly, your four years of high school, completely your own.

In addition to your lack of definition as a collective, you are also pretty unique as individuals, succeeding in a wide variety of ways – some traditional, and some not. I am honored to share some of those achievements here.

Your Middle School teachers report that your spectacular quirkiness was on display from the beginning:

Your accomplishments – quirky and not – continued at the Upper School. In the classroom, your projects, debates, and discussions were altogether original. There was the rogue homemade quad copter, the sharkboard, the various avalanche detection and safety devices (some of which are apparently worthy of patents), the virtual-reality iPhone app complete with cardboard binoculars, an incredible research paper on Hawaiian history, an elaborate skit on Ibn Battuta complete with soundtracks, and an app that lets you visualize how far you have walked on a path to China. Students from one senior English class sponsored a fundraiser that raised $800 for Partners in Health. Another of you developed a robot that can digitize CD and DVD collections.

And then there were the awards. Three of you have been recognized for your Spanish writing in the statewide writing contest. One of you is a Presidential Scholar. Nine are National Merit Scholars. One of you is a National Hispanic Merit Scholar. One of you has been a nationally ranked math student for the entirety of your time at Lakeside, ultimately placing sixth this year in the USA Math Olympiad, the best result ever for a Lakeside student.

Your passion for social justice was often on display. You led workshops here at school, as well as locally, regionally, and nationally on topics like gender identity, intersectionality, and race, normalizing conversations about trust, identity, and inclusion. You also demonstrated your commitment to social justice simply through your commitment to each other. At the prom, for instance, an entire advisory chose to delay their dinner until after sundown in support of those observing Ramadan.

A number of you have been active politically. Two students in this class started High Schoolers for Hillary. Another of you presented at Mayor Murray's Youth Education Summit.

Artistically, your accomplishments are significant. One of you has had your movies accepted to over 25 film festivals around the country. Your work in the ceramics and sculpture studios has been inspired, with all sorts of incredible work installed around campus, including the amazing tree sweaters that currently grace Red Square. Five of you were finalists in the state high school photography contest, with two of you taking home major awards. One senior photo student had the opportunity to shoot a Seattle Sounders game from the sidelines. Another student started a business selling his paintings.

The seniors in the drama program have been remarkably prolific, participating in four "Circus" productions, as well as tons of plays and musicals, both here on campus and through the Seattle youth theater scene. One of you, a cellist, was invited to attend the prestigious Tanglewood Institute. A member of the class is a member of an all-girls jazz band. A number of you have been selected to play with the Seattle Youth Symphony and the Seattle JazzEd ensemble. Another of you is an accomplished music producer and DJ musician in the Seattle area, and has been tapped to go on a major national tour this summer. Yet another is a promising country-western singer-songwriter.

Athletically, this class was one of the best that Lakeside has ever seen. Freshman year, one of you set the high school freshman indoor mile record. The girls soccer team placed second in the Metro League this year and got to the final eight in the state tournament, fueled by their pre-game bonding to the song "Closer" by the Chainsmokers. The volleyball team won the state championships this year with two members recognized as Metro League MVP's over the past two years. The girls swim team has won an unbelievable three state championships in a row, with one member of this class winning a state diving championship, and another breaking a state record as a member of the 200 free relay. The football team, though tiny in numbers, muscled their way into the state tournament, rallying from a super-tough season start to nearly beat one of the state's best teams in the round of 32. (This, when they weren't playing Settlers of Catan.)

One senior on the girls basketball team became the first female in Lakeside history to score 1000 points and 1000 rebounds, along the way being named MVP of the Metro League, and earning various all-state honors. Another member of that team tied the Lakeside record for assists in a season. One of you has led the tennis team as the number one singles player for four years, ultimately winning the singles state championship this year. In the past four years, the girls Ultimate team has won two Seattle invitationals, two state titles, and one Western conference championship. The boys have won one Seattle invitational, two state titles, and just this past weekend came in second in the nation. The five seniors on the baseball team, all four-year lettermen, have compiled more wins on the diamond than any senior class in Lakeside history, along the way earning three trips to the state tournament. Through all of your athletic endeavors you were supported by the ever-present lion mascot, who has now been hired on by the Everett Aquasox to be their mascot.

Some of your achievements took place outside of the classroom. One of you is a member of the National Junior Curling Team. Another is an A-rated fencer. One of you donates 10 percent of your allowance to charity each month. Another of you invented, patented, and earned FDA approval for a device that can detect heart difficulties, even appearing on Jimmy Fallon to talk about your work. One of you fosters kittens. Four of you played in the World Junior Ultimate Frisbee Championships in Poland. One of you is an accomplished soloist with the Recorder Orchestra of Puget Sound. One of you builds birdhouses and restores old cars. The Youth PowerHouse website, which was built by members of this class, connects kids with volunteer opportunities. A couple of you, so inspired by a speaker here on campus, have spent your weekends hunting for fossils in western Washington. One of you participates in National Novel Writing Month, and spent the month of November writing a full-length novel. One of you interned with the Ministry of Health in Bhutan. Another spent last summer in China participating in to the National Security Language Initiative for Youth. One of you has a fishing blog. One of you was selected to be the headman at a recent Native American powwow. Another of you was one of the first five employees at a start-up that is now valued at over $20 million. And yet another is a founding member of the Seattle Youth Climate Action leadership team. One of you can solve a Rubik's cube in 16 seconds. Another broke the Guinness Record for typing the world's fastest text message.

Giving back is a theme I had heard repeatedly when I asked people about this class. You have volunteered for all sorts of organizations, from CoderDojo to the Children's Home to TeenLink to Camp Casey to House of Hope: Uganda to Free the Children to St. Joseph's Baby Corner. One of you gave an opening speech at last year's We Day.

And sometimes you just let your silliness show through – teaching Dr. Brooks the dance "Juju on dat beat" and then secretly filming her. She loved that. And then there were those of you who eschewed dancing, choosing to spend your time at school dances drinking tea and discussing books. Or those of you who, in the midst of the craziness of fall course changes, managed to make Mr. de Grys laugh with your invention of a new course, Poetry of Quantum Electrodynamics.

And despite some occasional moments of discord, you also showed your camaraderie and joy for each other's accomplishments – cheering when one of you gained celebrity by catching a ball in the stands at a Seahawks game, showing up at each other's games and events, participating in a fashion show celebrating the work of one of your classmates, clapping uproariously for every Stud of the Week and assembly emcee, and joyfully applauding each other at last night's baccalaureate celebration.

So, how best to describe a class of earth toned sardines penchants for tree sweaters, Settlers of Catan, and sharkboards? As is the tradition, I have chosen a word that embraces your essence as a class.

But, Class of 2017, I faced a dilemma as I searched for a word to describe you. How honest should I be? Should I go with something anodyne and sweet? Or should I embrace your quirkiness? In the end, (this won't come as a surprise), I decided to go with candid and direct. (It runs in the family.)

The word I chose is intended both to describe you as a collective, as well as you as a group of individuals. The word is derived from Greek roots, and essentially means, 'of its own mixture'. Class of 2017, no doubt you are of your own mixture – and better for it.

Ladies and gentlemen, I am proud to announce the idiosyncratic class of 2017.