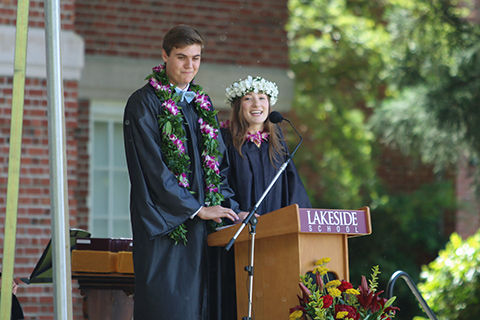 Commencement 2017: Surviving and thriving
Share to FacebookShare to TwitterShare to LinkedInShare to PinterestShare to EmailPrint this page
Jun 8 2017

by Michael Chandler and Isabella Frohlich, members of the Class of 2017

Following is an excerpt from the speech by Michael Chandler and Isabella Frohlich, who were chosen by their classmates to speak at Commencement 2017.

Isabella: ...We leave this school as a cohesive group of young folks who support and care about one another. We've left our mark on the school in so many ways. And I mean a positive and beneficial mark, so not of the illicit graffiti sort.

Michael: So again, congratulations on surviving Lakeside. But we have done more than just survive here. At Lakeside, we thrived. Obviously, there have been some crazy accomplishments in our class. The list of all we've done would take up the entirety of the ten minutes we were given to speak. To give a short summary, our class is comprised of CEOs, a Presidential Scholar, crazy musicians, singers, and rappers, sports stars on national teams, filmmakers, actors, authors and playwrights, chess players, activists, and the list goes on. Lakeside gave us the tools and the teachers that we needed to achieve our full potential....

Isabella: But our class is more than just a list of individual accomplishments, and our accomplishments stretch beyond academia. We've thrived by really coming into our own as a caring, supportive family for one another.

Isabella: I've definitely found a family here. I think it's helped that in this year especially, we've become so much more vulnerable with each other. We began to open up at the Senior Circle on our retreat, though people stepped in tentatively. Revealing secrets about our lives was nerve-wracking and it felt like risk-taking, but over the course of the year we've continued on the vulnerability track. The number of Real Talks given by our classmates is amazing. Sylvie, Katherine, Colby, Zina, Drew, and Skye, thank you for baring your souls to us this year, and thank you to those of you that have done so in our first three years. I imagine that it takes a lot of bravery to be vulnerable with whoever shows up. And we did show up. We wanted to learn about each other, we wanted to get closer, we wanted to support our peers. I think that the Real Talks this year epitomize the way our class has thrived.

Michael: Our Facebook group offers an interesting timeline of our class's closeness over the past four years. Freshman year, there was not a single post. It took a full year before Charlie decided to break the ice by asking, "Anyone going to Bumbershoot?" Sophomore year, there were a few more posts, but nothing crazy. Junior year, it began to pick up the pace with my pizza vlog from Italy and "Earthtones." Senior year, it seems like everytime I look at my phone there's a notification, "Someone posted in Lakeside Class of 2017." This year has been a time of immense bonding for us. We hang out as entire class with decent frequency now. We make s'mores and have barbecues! We organized a fake sleepover on the quad!

Isabella: And that was an incredibly fun morning, by the way. I woke up at 5 a.m. to make it to campus by 6 to set up my massive eight-person tent. The coffee and donuts and camaraderie were unbeatable.

Isabella: We've even thrived by taking Bernie's advice to take time to do nothing. Though, if I'm being honest, we weren't doing nothing because we became spiritually smarter. It was just senioritis.

Michael: Congratulations on surviving and thriving. We'd like to impart one final piece of wisdom on you young-ins before we leave this stage. This advice has come to us almost like fate. At the end of this year, Mr. McKinley sent my calculus class a commencement speech for UT Austin by a navy seal, Admiral William H. McRaven. Navy training is physically and mentally grueling, but if the going gets too tough, there's a bell that anyone can ring at any time to quit. That's all you have to do, just ring the bell and you're done. But, McRaven says, "If you want to change the world, don't ever ring the bell." Essentially, never give up. Mr. McKinley wrote that on the whiteboard every test we took.

Isabella: That's all well and good, but on Sunday before we met to finish this speech, both my mom and [another parent] independently gave us a copy of the book this guy wrote, containing his UT Austin commencement speech and the events in his life that inspired it. It seemed as though the stars aligned and a voice from above was yelling at us to TALK ABOUT NOT RINGING THE BELL, so here it is, folks: No matter how tempting it might be, do not ring the bell. Do not give up; do not take the easy way out. Struggle to survive and you will end up thriving.

Michael: Lakeside teaches us to never give up and to never ring the bell. While climbing Mount Baker on my outdoor trip, I was faced with the overwhelming desire to give up and not finish the climb, despite the fact that I was near the top. Fortunately, Mr. McKinley was there to help me through and to help me finish the climb. He is the reason that I didn't give up; I didn't ring the bell. So thank you, Mr. McKinley for helping me conquer two mountains: calculus and Mount Baker. I survived them both and I'm now thriving.

Isabella: I almost rang the bell after my freshman year at Lakeside. I wasn't adjusting super well and I wasn't sure that I fit in. I went so far as to tour other schools, but Alban Dennis stopped me from giving up on Lakeside. He introduced me to theater, which quickly became my favorite thing in the world. He gave me a community at Lakeside and a support system, and I realized that I wanted to stay, if only because I wanted to keep Alban as a mentor. So I'm still here, and staying was the best decision of my life. Lakeside has been exactly the right fit for me. I've thrived here, and I can't imagine myself anywhere else. So thank you, Alban, for not allowing me to ring the bell.

Michael: Lakeside taunts us every hour by ringing a bell from up there, on the top of Bliss, though we've figured out that it's actually a speaker! And yet not a single one of us in the Lakeside Class of 2017 did it. We're graduating today, and that's such an odd feeling. Lakeside is comfortable; it's familiar. I'm scared for the future. Moving somewhere new, making new friends and actually having to be an adult is terrifying. But if we were able to survive Lakeside without ringing the bell, we will be able to survive whatever comes next. In the coming years, life will be full of new surprises, and we will do more than just survive through the challenges.

Isabella: We will rise to the occasion and thrive, wherever we are, whatever we do. Class, we love you. It's been a wild four years. Happy graduation.