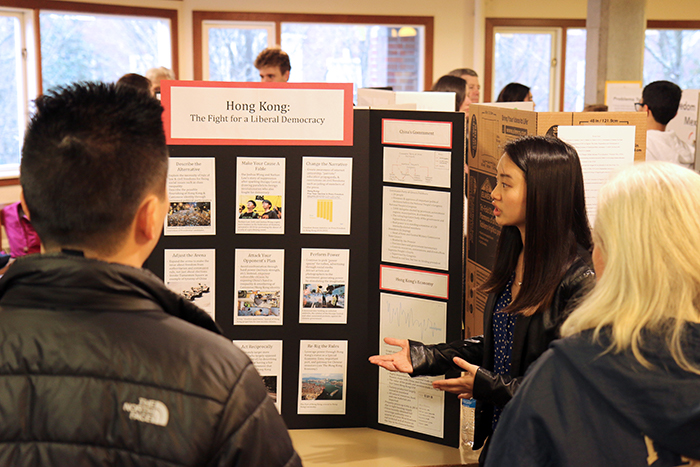 Driving Question: How can we teach students that their voice matters?
Share to FacebookShare to TwitterShare to LinkedInShare to PinterestShare to EmailPrint this page
Mar 21 2018

“Adjust the arena. Change the narrative. Preform power.” In Comparative Government at Lakeside this winter, students learned the systems of six important nations—Russia, China, the United Kingdom, Iran, Mexico and Nigeria—and also how to foment political change there.

Comparative Government, a traditional AP-style course that I inherited years ago at Lakeside, has evolved to a project-based intensive course designed to offer students foundational concepts and the information they need to create successful, real-world solutions to the thorny global problems we study. This year, I implemented Eric Liu’s newly-published handbook, “You’re More Powerful Than You Think,” to create a new unit and summative project on political action.

Like any other process, there are strategies for affecting political change that can be learned. Eric Liu is the founder and CEO of Citizen University, a non-partisan organization devoted to spreading “the art of powerful citizenship.” “You’re More Powerful Than You Think” begins by pointing out some essential laws of power. One of them is this: if you don’t take it, others happily will. It’s a call to action that we’ve seen seized by the teenagers in Parkland, Florida and across the country in this month’s walk-out and student march.

Project-based learning isn’t always comfortable for Lakeside students; sometimes they just want us to tell them what they need to know. But our job as contemporary educators is to create gaps for them, to craft problems that they can solve with research, creativity, and coaching. The gap they had to cross in this Comparative Government project was to apply Liu’s U.S.-based political strategies to another country we studied.

One student, Hana B. ’18, drew on her GSL China experiences in Yunnan Province to use culture in promoting the political voice of Tibetans within China. Melissa W. ’19 crafted a powerful vision for reforming education in Nigeria. Students Alex N. ’18, Andrew C. ’18, and Prithvi R. ’18 came up with innovative ways to address corruption in Mexico. Iman L. ’18 promoted women’s rights in Iran with a plan of action called #IStandWithHer. Friends, family members, and guest Ben Phillips, Senior Program Director for Citizen University, came to an exhibit in the library on Jan. 10 to see students present their projects, and left inspired by the range of strategies and political ideals they represented.

Around the world today, illiberal democracy, extreme nationalism, and authoritarianism are on the rise. But we’re also seeing a new level of political engagement seeking transparent, proactive, and democratic governance. I’m confident that Lakeside students are becoming prepared to take on those global challenges and will solve them in ways we haven’t even imagined.