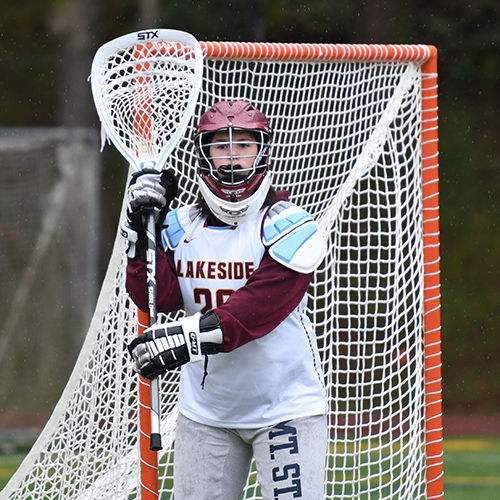 This year I decided to take a risk and try out for the girls lacrosse team without having any prior experience. It just so happened that the team was looking for a goalie which was perfect for me as I have been a soccer goalie on the Lakeside team for the past year and outside of school for a couple of years. The first couple of practices were definitely rough. Stepping behind a lacrosse ball takes a little getting used to, even if you have jumped on the ground in soccer to save a goal. Currently, it's halfway through the season and, after many saves and bruises, I have learned five key things which go into making a save: communication, staying engaged, staying big, not being afraid of the ball, and moving past mistakes.

1. Communication
When the ball makes it down to the defense, the most important thing for a goalie is communication. I have several different things I can say depending on where the ball is on the field. If the ball is anywhere on the right, I will call (more like scream because a mouth guard makes everything pretty hard to hear) "right!" and "left!" for the left side. Depending on where the ball is relative to the goal I will also call "top" or "back." Another key thing to say is "crash!" for any time an opposing player tries to run at the goal. It signals to the defense to leave their mark and make sure the girl with the ball doesn't take a shot. It took a while for me to get comfortable yelling, especially because it was a new team and I didn't know all the players super well. To get over this, I made sure to communicate with my defense on what calls were helpful and now I am able to communicate with them in a way which I know is helping. Communication helps me to stay engaged with the game and also helps inform the defense on what is happening on other parts of the field.

2. Stay engaged
While all the field players are constantly running around during the game, I stand in the way back all by myself. Of course, there are high tension plays down by the goal but sometimes the ball can stay on the other half or the field the majority of the game. This is a good sign about how we are playing as an offense, but it can also lead to problems with how engaged the goalie is in the game. Communication is one way I stay engaged with my teammates, but even when the ball is down at the other goal it's important to be ready in case the possession quickly flips to the other team.

3. Be big
In order to be a goalie in either soccer or lacrosse, I have to stand big and confident in the goal. The field players in lacrosse come down the field with a ferocity and speed which is borderline scary. It took me time and practice to not shrink away when the players got close enough to shoot. In the end, shrinking back not only makes it easier for them to score, but it makes them feel more confident about their shot. When I come out and stand tall it can lead to the shooter getting freaked out and backing off or making a bad shot.

4. Don't be afraid of getting hit
As the goalie, I have the biggest stick out of all the players and I am equipped with a helmet, gloves, chest pad, thigh pads, and shin pads, so I have plenty of protection against the ball. These amenities of course don't take away the fear of getting hit completely. Hopefully you have never had the experience of getting hit with a lacrosse ball because it is not at all fun. I have experienced several concussions and bruises from a soccer ball, but they don't even compare to injuries from a lacrosse ball. I have had numerous bruises from balls that hit right when the padding ended or where there was no padding at all. These injuries could seem disheartening to some, but I see them as a victory and a save. I have been told "getting hit during practice hurts, but during a game you can barely feel it," and this is completely true. The feeling of making the save is so rewarding that I can barely tell the ball hit me. It definitely took me a while to get used to moving behind the ball and it's never fun to not be able to walk due to bruises, but being a goalie means you can't be afraid of getting hit. In the end, the pain is worth it.

5. Move past mistakes
Probably the most important thing to remember while in goal is that mistakes happen. I constantly have to remind myself that it's impossible to make every save or get each clear to the right person. But I know that it's important to learn from my mistakes. Probably my best example of this is how in the first two weeks of lacrosse season I couldn't clear or pass the ball with my goalie stick at all. I would drop the ball, fling it way too soft, or have the ball go in the completely wrong direction. I saw that this was one of my weak spots and spent some time just working on my clears. Now, I am able to clear directly to my field players about 89% of the time. Something that I am currently working on is coming forward to the ball. I tend to do a little hop in the goal before making the save, and this wastes time and doesn't allow me to meet the ball out of the goal. I have made sure to make a mental note whenever I make this mistake and try to fix it on the next rep or next play. The goalie has a hard job as the last person between the shooter and a goal, so it's very important to not carry mistakes, like letting a ball in, on into the next play. Whenever I make a mistake like missing a save or messing up a clear, I take a deep breath, save that moment for me to work on the skill later, and get ready for the rest of the game, leaving that mistake behind me.

I have loved being on the lacrosse team this year. My teammates are all wonderful players and people who I am excited to finish the season with. I have so much to improve on this year and throughout the rest of my time as a lacrosse goalie, but everything I've learned has come from the support of my teammates and amazing coaches. Taking the risk to try out for a new team is always a scary thing but I have found it to be so incredible rewarding and I cannot wait for the rest of the season.

Catch the girls lacrosse team in home action on Friday, April 21 at 5 p.m. as they take on Overlake, or on April 27 at 6 p.m. as they visit Ballard. Can't make it? Follow along on Twitter @LakesideLionsGL. 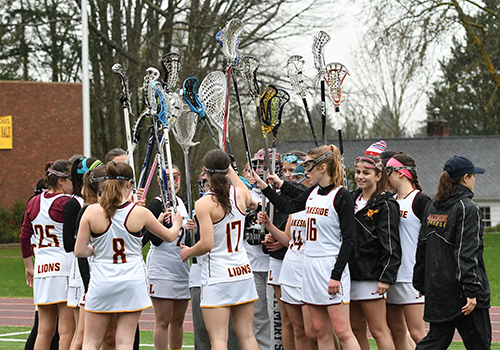