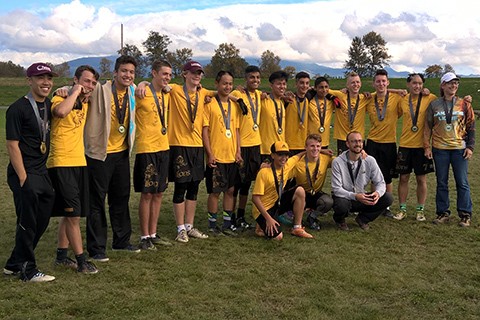 1. Lakeside boys and girls Ultimate are the defending state champions. There are 21 high-school teams who compete in the Disc Northwest Boys League Championship. Those teams are in three different divisions, and Lakeside is in the Puget Sound Division (along with Bainbridge, Bellevue, Waldorf, Skyline, and Turbulence). Watch highlights from the 2015 boys state quarterfinals here, state semifinals here, and state finals here.

2. Lakeside has four captains who have very large responsibilities. They run the first two weeks of practice; they develop the playbook and offseason strategies; they help determine the varsity and JV status of their peers; they organize captains' practices for every Friday; they call the lines during games (meaning they're judges of some of the game's specific rules); they work hand-in-hand with me on strategy; they are responsible for team gear, medkit, cones, and jerseys; and finally, they organize and choose the incredibly important nicknames of each player for the back of the team jerseys.

4. Lakeside Ultimate (both boys and girls) has been invited to play in the inaugural high school national championships that will be held this coming June. Though both teams are interested and hope to attend, the logistics are challenging as the tournament falls over final exams at Lakeside, and takes place near Chicago, IL.

5. Lakeside Ultimate has a great website with photos and videos. Head to www.lakesideultimate.org to check us out.