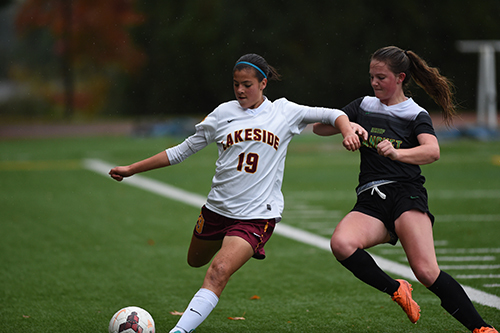 Note: Lakeside's girls soccer team is headed to the state tournament as the Metro League #2 seed. The team faces Southridge High School on Saturday, Nov. 12 at 1 p.m. at Southridge HIgh School (Kennewick, WA) in the round of 8. Follow the match on Twitter: @lakesidelionsfc

This year in girls soccer, we decided to concentrate on details that would help our student-athletes become accountable and better able to focus on the things that help them be their consistent best.

There are myriad things at Lakeside which compete for our students' attention. To help students bring their best selves to the game, mindfulness through breath control, controllable variable focusing, and refocusing after a distraction have been recurrent themes in our work on and off the field. Generally, during training and games, mistakes in concentration are the primary reason that athletes struggle performance-wise. Choking, slumps, performance problems, fears, and lack of self-confidence can all be traced to the athlete's mental mistakes in focusing on external variables. Our goal is to have all of our student-athletes develop mental toughness and start performing to their athletic potential the moment they get out of their last class.

Every athlete has had the experience of getting psyched out or intimidated before or during competition, much like we were before our first Seattle Prep game this season. Our players were feeling good until they started thinking about Prep. Were they bigger, faster, stronger, better than us? Do they have great-looking uniforms, or an awe-inspiring collection of talent? Hadn't they won last year's state championship with no losses since? Whatever the specifics running through our players' heads, we spent way too much time considering Prep and not enough time considering us. The end result was not pretty: Confidence went downhill, decisions didn't happen fast enough, knees turned into Jell-O, and legs felt like lead. We couldn't stop focusing on them! The end result was a 0-5 lopsided loss to Prep.

When athletes spend all this energy on their opponent, performance tends to go down the drain. That's because 95 out of 100 athletes get knocked off-center by focusing too much on their opponents. It is the major cause of psych-outs and intimidation. One key job an athlete must do in order to succeed is to "stay inside herself" when she performs. We teach our players to focus on YOU and the strengths YOU bring to the field. Not the other team. That means YOU need to go out there and do what YOU do best. You need to stick to basics and "play your own game." If athletes get too caught up in how skilled and wonderful they imagine opponents to be, there is a tendency to step outside themselves and direct their attention to variables beyond their control.

An effective athlete stays focused on what she is capable of doing. We help our student-athletes do this by putting together a performance script. Here's an example:

2.Send balls into the danger area

4.Tuck in on weak side

We teach our players to concentrate on two or three technical strengths that make them effective on the field. By concentrating on their script, they can block out the opponent and everything about them. The only deviation is when there are strategic things about the opponent that are useful to consider and that will ultimately help our performance.

Remember, the competition is inside of each athlete. The toughest opponent isn't out there – it's inside our own brain. Our goal is to lay down a performance on any given day that is our best on that day. So we repeatedly instruct players that when their concentration starts to wander, to quickly and gently bring their focus back to themselves and what they are doing at that moment. We have them ask themselves: "What's important now?" The answer is their own script. "What's important now" helps them focus on variables they can control. Every day is a day to strengthen our ability to stay focused on what we do well and makes us effective.

Through this and other processes, we have put together a pretty effective season so far. Our players know what they can control and what makes them effective on the field. When we stick to those things we are capable of producing quality results. They know that our success on the field comes from a solid focus on the controllable variables of what makes each of our players effective in their own right.