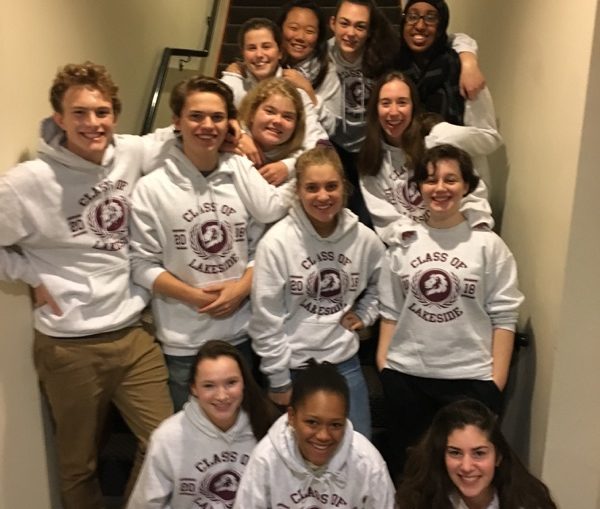 From the Tatler: Bus stops, spaceships, and corgis: Drama IV takes the Young Playwrights Program
Share to FacebookShare to TwitterShare to LinkedInShare to PinterestShare to EmailPrint this page
Feb 6 2018

As the night of the Young Playwrights Program (YPP) celebration at ACT theater concluded, the group of Lakeside students in attendance was cheerfully congratulated by the keynote speaker on their cheering capabilities. It took us months of preparation, more by writing plays than practicing cheering for our classmates, for this event.

We were each asked to produce novel and original theater pieces over the span of several months. The annual program is a much anticipated (or dreaded) hallmark of the Drama IV curriculum. To see this through, Lakeside’s own Alban Dennis combined forces with YPP maestro K. Brian Neel to guide us through brainstorming, drafting, and workshopping original one-act plays. Many of the plays written each year go on to be produced and directed by local Seattle theaters (such as ACT or Seattle Children’s Theater) or by students during "Circus!," Lakeside’s student written, produced, and performed drama festival. With varying levels of playwriting experience, we embarked on a journey that stretched our comfort levels to other dimensions.

Among our group, seven students were recognized with honorable mentions, and Francesca M. ’18’s play, We All End at the Grave, was one of eight writers chosen by ACT theater to have their play performed by professionals in March. Undergoing the creative process undoubtedly changed how we see the craft today. Not only is playwriting a liberal art form, it’s one that requires a loose grip on the reigns. It is increasingly interesting and fulfilling to consider how our work continues to be shaped and brought to life beyond the page by directors, producers, and actors. Overall, we learned that theater is one of the few art forms that allows for continual growth, reinterpretation, and development.