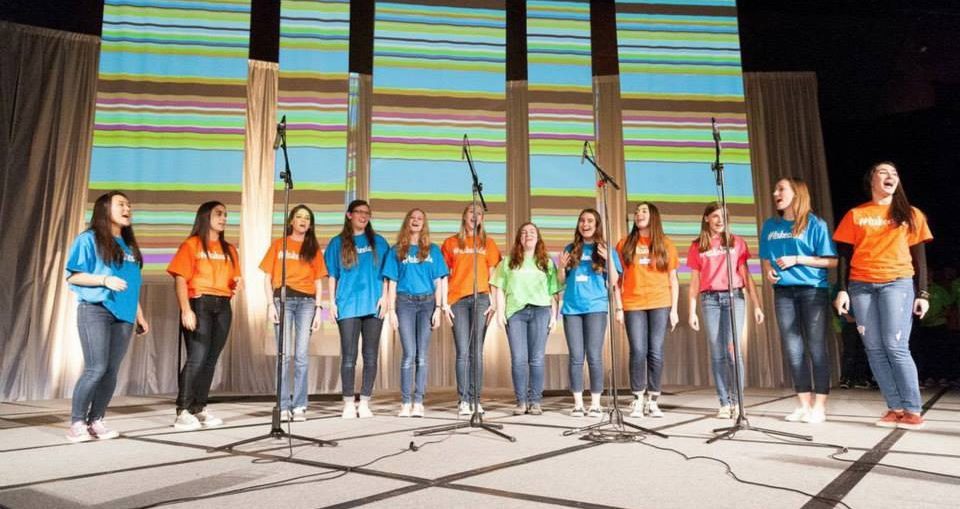 From the Tatler: Campus A Cappella: Thoroughbred When Student-Led
Share to FacebookShare to TwitterShare to LinkedInShare to PinterestShare to EmailPrint this page
Dec 13 2016

When Meg R., Walker C., and Genevieve J. '16 arrived in St. Nick's to lead the first Bellas a cappella practice of the 2015-2016 school year, they ran into a speed bump: the piano was locked. Worse yet, they had no idea how to remedy their problem. "Janet always had the keys," Meg remembered. "Little things like that, you take for granted."

In previous years, the piano was integral to the Bellas' learning process. Faculty leader Janet Dahl would play it to demonstrate melodies to the group's four vocal sections, who would then break out and repeat the phrases until they were second nature. But last year—the first in which the Bellas were entirely student-led—it became clear that the old methodology would have to change.

"Much of the first year was about finding creative alternatives [to traditionally teaching vocal parts]—vocal tracks, often, but sometimes one of the leaders would just memorize all the parts and then teach them to the group one at a time." A cappella is delicate and depends on teamwork, the ability to fuse disparate parts to form a cohesive whole. Because Lakeside's a cappella clubs do not require music-reading skills, the actual learning of songs to achieve such cohesion was an underrated challenge.

Another unseen obstacle for the new Bellas? Rehearsal space reservation. "Since we aren't faculty-run, we're less legitimized in the school, and we often aren't taken as seriously," current co-leader Natasha V. '17 remarked, referring to the difficulty of securing a permanent meeting spot due to scheduling conflicts with the art department. As students advocating for themselves for the first time, the negotiations felt formidable. Taking St. Nick's for granted was easy, just like vocal teaching was.

Nevertheless, the early Bellas leaders were up to the task of taking charge. "[Leading] was a good responsibility. I think, as young people, it's easy to see tasks and just assume they 'get done'—emphasis on the passive voice," Meg R. reflected. "Leading an a cappella group makes you realize that, oh, things don't just 'get done.' Someone stands up and says, 'I'll do it.' You can be that someone. It's about active responsibility."

Brian K. '17, a current Acafellas leader, agrees: "In my opinion, being a student-led group is very central to our identity. While it's probable that being directed by a faculty member might improve our performance and increase our efficiency, it would take away the opportunity for us to learn how to run things ourselves... Being student-led really brings us together, which is why I think we're one of the tightest groups on campus."

It's clear that the a cappella clubs appreciate their liberty in the long run, and the student body seems to concur in a larger sense: in a recent poll, 92% of respondents said that clubs were better when student-led as opposed to faculty-supervised. For the Bellas and 'Fellas, artistic freedom is a certain perk of carte blanche, but the experience of full-fledged leadership is what's most valuable, challenges and all. As a current leader, I can vouch for that. Knowing that we're accountable for every element of our set helps us bond and produce performances that we're wholeheartedly enthusiastic about. The next time you catch us live, consider that our members had a hand in every part of the final product—it's something to cheer for!