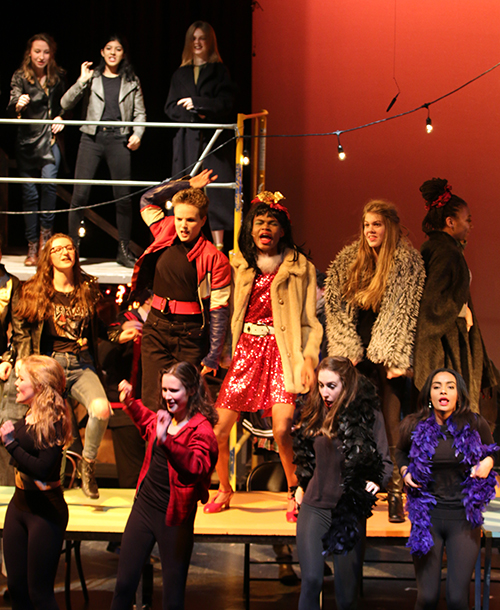 From the Tatler: Inside Rent
Share to FacebookShare to TwitterShare to LinkedInShare to PinterestShare to EmailPrint this page
Feb 9 2018

Lakeside’s production of Rent, which ran January 25-29, included amazing aerial stunts by Gabriella O. ’18 as Mimi, a dynamic ensemble of singing and dancing junkies and cops, and even a fake snow machine. The show follows the story of Mark Cohen, played by Charlie C. ’19, an aspiring producer who documents his life in New York City as his friends deal with the HIV/AIDS epidemic, substance abuse, and, as the title suggests, the struggle to pay rent.

This production did not happen without the extreme diligence and dedication of our fabulous directors, cast members, band, stage crew, tech, and all others who helped or supported the show in some way. Rehearsals began in early November, with an initial focus on singing and dancing. Most days after winter break, the entire cast attended four-hour rehearsals. During tech week (the much-anticipated week where stage crew works with the cast to orchestrate sound cues, lighting, costumes, and other details), rehearsals stretch until 9:30 p.m. This week involved eating dinner at 3:30 (obscenely early for me, but the only option if I didn’t want to be attempting to eat a Chipotle burrito onstage), and lots of sleep deprivation—but it was also extremely rewarding to fine-tune a production I’ve been a part of for several months.

Overall, as an ensemble member, being in this show was incredibly worthwhile for me. Not only did I get to learn more about life in 1980’s New York City, but getting to know the cast members was definitely a highlight of the year. Our director, Michael Place, gave each of us terminology to help us better understand the characters we were embodying. Each cast member gave a presentation about a specific topic relating to New York City culture at the time, ranging from Harlem Renaissance poetry to popular newspapers at the time, to help the cast better comprehend the context of the show.

As well as including some iconic music numbers, such as “Seasons of Love,” Rent is known for raising awareness about social inequalities, such as homelessness and addiction. These issues are not confined to a specific place or time period—they remain major problems in Seattle today. After playing a character experiencing homelessness, I still can’t totally wrap my head around what it would be like to live on the streets, let alone during a freezing winter. But I have a better understanding, and, most importantly, I have a desire to help—by donating either time or much-needed goods such as warm clothes and toiletries to organizations such as Mary’s Place or YouthCare. And I hope that those who were able to see one (or more) of our shows also exited the theater with a desire to help combat these issues.