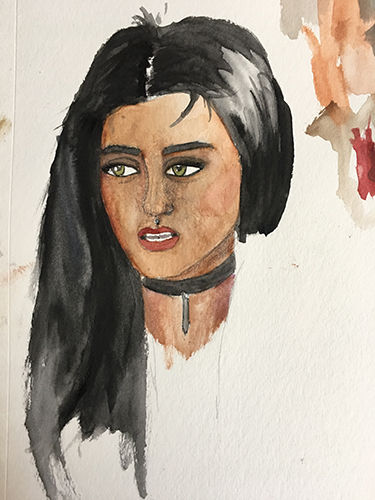 From the Tatler: On watercolors and the art of strategic self-improvement
Share to FacebookShare to TwitterShare to LinkedInShare to PinterestShare to EmailPrint this page
Mar 23 2017

Last May, I made a decision that I would, by turns, regret and revel in over the next seven months. For the rest of the year, I would use watercolors as my sole medium of expression through visual art. No markers, no acrylics, no oils, no pastels – nothing else. It was a decision that I could not quite explain at the time. I rationalized it through vague ruminations on the necessity of practice in order to gain expertise (and the slightly less admirable desire to use a medium that no one else in my class had much experience with, in order to feel less incompetent).

It was not until months later that the reason came to me. I was in art class and had spent the last hour working on a portrait, only to tear through the paper, ripping a hole right under the nose. For those who don't know much about watercolors, a short brief: watercolors work by dissolving pigment in water (duh) and spreading the pigment over paper through this solution. There is a limit to how much paint even the thickest watercolor papers can take before tearing, the fibers of the paper weakened by water. I had attempted to fix the shadow under the nose so many times, layering so many sheets of water, that the paper had not been able to take it any longer.

I swore. Loudly. I attempted to use a paper towel to dab at the paint. As it was not the pigment that was the problem, but rather the hole gouged through the paper, this did pretty much nothing to help. I swore again. Exhaling deeply and closing my eyes, I tried to keep myself calm. I thought about how every artist requires practice, how sometimes pieces are not successful, how watercolor is a tricky medium that takes a while to get the hang of. It did not help. I successfully prevented myself from swearing again, but was otherwise mired in a bog of frustration and self-criticism.

I got up and took a walk. I was taking a sip from the water fountain when it came to me, the reason that had been eluding me since May. This was why I had to use watercolors – because they drove me crazy.

Let me explain: I am not usually a proponent of doing things just because they are frustrating and difficult. Life tends to throw enough trouble our way without us having to go look for it. But, sometimes, purposefully challenging ourselves can help us retrain our worse impulses. Watercolors would not allow me to obsess. As an extremely obsessive person, this was a pain in the neck. But, I had come to realize, it was also vitally important. In order to alter the part of me that wanted to go over something over and over again until it was exactly how I wanted it (which would pretty much never be the case), I needed to cut myself off from the possibility of reworking my art. Watercolors allowed me to do that. They helped me on my journey to let go of the things I cannot (or perhaps, should not) control.

This is not to say that watercolors completely fixed my instinct for obsession. I am still a highly obsessive person. I doubt that I will ever not be an obsessive person; it is a part of who I am. But introducing small, tangible ways in my everyday life that allow me to work towards self-improvement and growth has been incredibly powerful. It has made me more aware of my instincts, something that by turn allows me to have more control over my own decisions. I may always be an obsessive person, but that does not mean that I cannot shift my decisions to reflect the person I want to be. Maybe it will even help me get there.