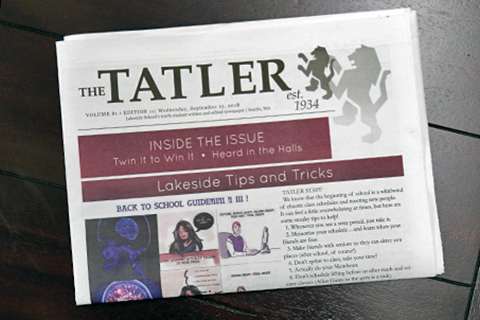 From the Tatler: Saying goodbye to damsels in distress
Share to FacebookShare to TwitterShare to LinkedInShare to PinterestShare to EmailPrint this page
Jan 16 2019

Recently, I learned about the Bechdel Test, a simple test that grades films on gender representation. To pass, a movie has to have two women with names, who have a conversation about something other than a man. Although it sounds simple, an unfortunately low number of your favorite films will actually pass. With that fresh in my mind, I wanted to have a Bechdel-inspired look at the books we’re assigned to read for class, ultimately answering some big questions. Does Lakeside English curriculum have equal gender representation? And, if not, should we switch out iconic texts with out-of-date messages in favor of more modern books that feature equality?

To get you orientated to our current field of feminism, let’s have a chat about what gender representation is. When I spoke to sophomore Leyla R-M during a late night in the library, she said, “[Gender representation] is having men and women presented in the same light. Often men are portrayed as strong, and women are portrayed as weak, especially in older literature.” Leyla then went on to talk about how a book with equal presentation defies the typical stereotypes and levels the playing field.

A few days later, I met with Dr. Berrada (who prefers to be called Ustad), for a further look at gender representation. As a teacher of regular English classes and a Gender Studies class, he offered a unique perspective, explaining the ‘windows and mirrors’ concept, “Windows allow students to see the world beyond and be aware of universal issues such as human progress, marriage, war, love, etc.”. But, when I read Romeo and Juliet for example, and I see a young girl coming to terms with the adult world, I’m able to see myself. That’s the mirror principle. In summary, Ustad said, “Gender representation is when students from different gender identities can see themselves positively reflected in literature. It’s not simply about having female characters represented in the text; it’s also about questioning the stereotypical representation of females in these texts.”

I asked Leyla about which books stood out to her as being particularly impressive. “In the Time of the Butterflies,” she responded, ”because all the main characters are women. It’s interesting to see all the different ways women can do what they gotta do to overcome their situation.” In The Time of the Butterflies by Julia Alvarez is the story of four sisters living in the Dominican Republic during the dictatorship of Trujillo, their resistance to the regime, and ultimately the murder of three of them (I promise that’s not a spoiler, you know from the beginning). For a teen girl reading it, it was inspiring for me to see the steadfast response of independent women in a time where at times they felt powerless over their bodies and rights. But then that brought up another question for me - does it still count as equal representation if the women in the novel are subject to sexual harassment, torture, and are ultimately murdered? Leyla saw my point, but she was still adamant that In The Time of the Butterflies counted, citing how important it is the recognized history so we don’t repeat it. That made sense to me - ignoring the problem of past abhorrent sexism is the same as letting go and saying it’s okay, which won’t help us get anywhere.

Contrastingly, while Romeo and Juliet is also considered a work of art, I don’t have to have read it to know I have some issues with it. There are the classic issues of men being powerful leaders and women being submissive wives and mothers that Leyla mentioned earlier and some sexist and offensive language. There’s also the dilemma of thirteen-year-old Juliet being proposed to by Paris, who is suspected to be almost double her age. So if Romeo and Juliet is as bad as we think it is - not only with hugely inadequate gender representation but in showing a general lack of respect towards women - why don’t we just swap it out for another work? In fact, why don’t we swap out every single infamous, yet ridiculously sexist novel for its modern alternative?

Again, I spoke with Ustad: “I think we can definitely find alternatives to Romeo and Juliet. The issue we have, and the conversation we’ve been having in the [English] department, is do good students need to read or be familiar with the so-called masters of literature?” He then went on to make an interesting argument as to why Romeo and Juliet may be better than most think. If you read deeper into the text, as I’m sure Ustad does on a regular basis, there are multiple instances of Juliet being the driven one. At one point she even pushes Romeo to abandon his family name - a huge patriarchal ‘stab’ as he put it. Ustad described it as, “That in itself, is a rejection of the status quo and the patriarchal system”. While Shakespeare wasn’t anywhere near a revolutionary, he did subtly let the lead female take control of things for a time. But by the end of the play it’s back to the customary way, with Ustad saying, “He restores the power of the patriarchal system, making the play represent Juliet’s success as temporary and limited in scope.”

When I took a look at the January Poll results, Lakeside’s stance on it’s gender representation becomes clear. The majority of the school - 60% - feels that we have respectable gender representation, a statistic in line with the opinions of my two interviewees. But this general attitude doesn’t mean we have to stop pushing for new characters and new books. As we read, it’s on us to be conscious of how people are represented and to recognize the bias an author might be writing with. And although gender is a massive part of the problem, we have to think in the bigger context of intersectionality. Race, ethnicity, body type, age, and sexuality all deserve equal time in the spotlight. Much like the Bechdel test, we always need our mental checklist at the ready, asking of each character: Are they portrayed realistically by the author? Are they shown as more than a victim? Do they have the power? Are they represented how we want women to be represented in modern society?