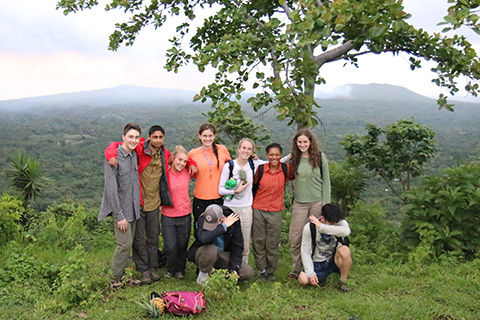 From the Tatler: What I Took Away from GSL, and Was It Worth It?
Share to FacebookShare to TwitterShare to LinkedInShare to PinterestShare to EmailPrint this page
Sep 16 2016

At 2:15 a.m. on June 19th, I awoke to the shrieking sound of an alarm and a quick shower. My parents shuttled my tired body into the car as we set off for Sea-Tac International Airport. The occasion? A month-long GSL trip to Nicaragua. After a final look and wave to my parents from the security line, it hit me all at once – Nicaragua was a foreign land, whose language I was only somewhat familiar with, and whose culture I did not know. A mixture of excitement and nerves refused to leave my mind until we arrived in Managua later that night, and I drifted off to sleep on top of unfamiliar sheets.

All around the world, Lakeside students were arriving in what would be their new homes for the next month, unsure of what to expect. Of course, we all had some idea of what we were doing. Each trip knew about the service they intended to do. In Ecuador, Lakeside students partnered with a local organization and worked in rural schools, also helping kids with special needs. In India, students interviewed families about how they gathered and used water. In Tanzania, Lakesiders taught kids how to use basic technology. On my trip, Nicaragua, our service included a variety of things, such as working in local schools, reforestation, and conducting surveys for a local organization. But the trips were so much more than just service. When I got on the plane to Nicaragua, there were so many more unknowns than knowns. I was worried about the month of summer I was missing at home, whether or not our group would bond, and if I had brought enough stuff to last an entire month. And what I wanted to know the most as I set off on my 31 day journey was this: would it all be worth it?

Last year, Tatler authors debated the effectiveness of GSL. Some may argue that trips like GSL are just an expensive way to enforce the white-savior complex. Others say the service is not really useful to the local communities. However, after experiencing GSL, I realized that it is just as much about the learning as it is about service. It's foolish to believe that a foreigner can have a drastic effect on a village's life. They do just as much for you – providing food and shelter, letting you see life through their eyes – as you do for them. This is not a bad thing. Don't get me wrong – this is not to say that the locals are not suffering from poverty. But poverty is a complex issue, and it's going to take more than a month and a handful of teenagers to solve. To quickly institute a huge change in the locals' lives would be very inconsiderate and, honestly, not really what GSL is about.

So what is the point of GSL? Why do we go, and is it worth it? The goal of GSL really goes with the mission of Lakeside School: to raise global leaders. There is something to be said for experiencing different ways of living all around the world firsthand. I watched as my own host family worked, from early hours in the morning at their dragon-fruit farm to late at night at their local store, in order to pay the three-hundred-dollar fee to move to Costa Rica, where my host mother's husband worked. Increasingly, I felt a sense of urgency and appreciation for my own life. At home, my own father was retiring, but in Nicaragua, my seventy-year-old host grandfather was still working tirelessly to provide a better life for his children. This was not fair, and I wanted to do something about it.

As the world becomes more and more globalized, we need to understand global culture to make concrete progress. Issues such as climate change, nuclear security, and terrorism cannot be solved without thinking on a global scale. And to think on a global scale, you have to gain perspective. This perspective on different cultures and lifestyles is one thing many people found on their GSL trip. "In Seattle, and especially at Lakeside, I have a very narrow view of my life. The life path I envision for myself is really very specific. On my trip, my eyes were opened to the breadth of ways people live, find success, and define success," wrote Gabriella O. '18 of the Ecuador trip.

It's hard to describe how much I miss the small things of GSL. I miss giggling with my host sister as we stomped around the house, searching for materials for our puppet show. I miss walking to our common meeting place in the village, never without receiving a hello or hug from two little boys who I became acquainted with through my daily trek. I miss meeting unfamiliar faces when I worked at the family store, even if I got a little flustered when the locals spoke too fast. But the life lessons I learned in Nicaragua will always stay with me. As Stella X. '18, who went on the Dominican Republic trip, said, "I have definitely taken a more worry-free spirit with me from seeing how the people in Cruz Verde lived, and I'll remember many of the lessons I learned about myself that I took from this trip for the rest of my life." And now, if you asked me whether the month-long trip, the first few days of awkwardness, and the different food and culture were all worth it, I would say yes. Absolutely.
Powered by Finalsite