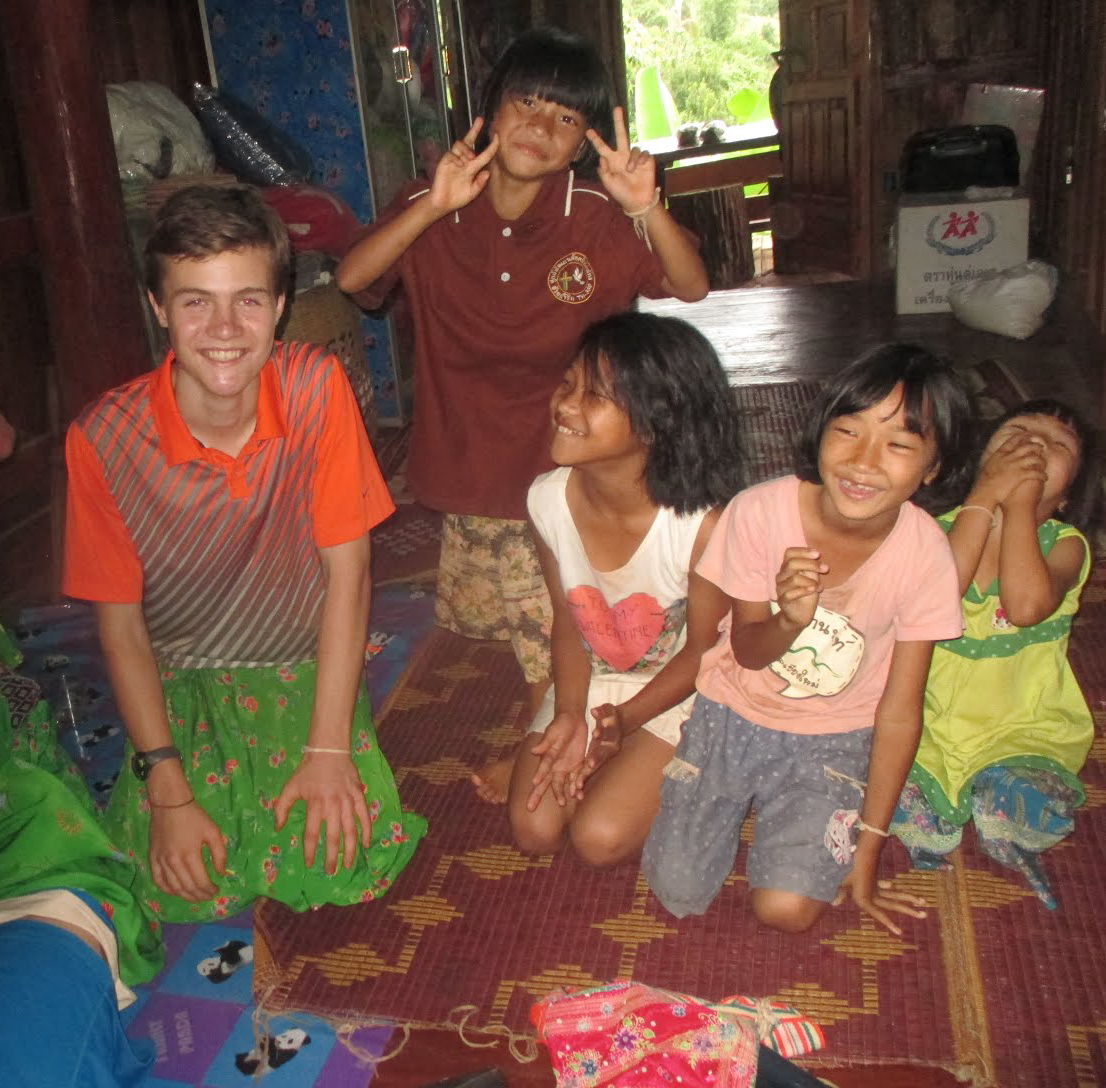 GSL 2016: Settling in
Share to FacebookShare to TwitterShare to LinkedInShare to PinterestShare to EmailPrint this page
Jun 24 2016

Students on Upper School Global Service Learning trips are settling in. Here, three students share their first impressions and how they're learning to connect with people in their host communities.

After finally growing accustomed to a 10-hour time difference and a vastly different culture, we were able to officially begin our service today at the Jifundishe library, a free study center for students wanting to pass their secondary school exams. We began in the morning, where we split into pairs to work on different service projects, including interviewing students for the library's social media pages, teaching basic computer skills, and making an inventory of all the electronic equipment at the library.

Anshul and I started with the interviews. The purpose of these interviews was to generate meaningful quotes that we could post on social media to draw more students to the program. To achieve this goal, Anshul and I asked questions about where each student was from, how they heard about the library, what their dreams are, and if the library has helped them towards those dreams. After working through some language barriers, we found an array of stories about students traveling from all corners of the country to study at the Jifundishe library. The stories were very powerful, and should look good on social media. In the afternoon, Anshul and I began our second project, teaching a group of four educators the basics of typing. All four of them began with little to no background in the world of computers, so we went over the basics of hand position and finger movement before turning them over to a typing program. After the hour had passed, we could see real growth in their efficiency, speed, and ability to look away from the keyboard. It was really nice to see the beginning of our service in Jifundishe paying off.

After service, each student returned to their homestays. It was impossible not to completely immerse myself in the local culture of the village, and the sub-community of farmers that my own host family is a part of. It was an amazing and incredibly nerve-racking experience to be thrown in the midst of this culture with very little background knowledge. Everything about the community was a new experience, but some things stood out more to me than others. For example, because my family is a part of a farming community, there are a large number of plants and animals residing near my homestay, including cows, pigs, chickens, cats, and dogs, as well as sausage, papaya, and banana trees, among others. Having two dogs at home felt like a hectic experience, but it was nothing compared to the paranoia caused by a gang of cats chasing chickens through the maize fields. Another thing that immediately stood out to me about my homestay was how everyone is friendly to one another, even to people that they don't know. When I walk from Jifundishe to my host family's house with my host father, it's strange to see how he greets every single person that he passes on the road, and how everyone responds as if they've known him their entire lives. This kind of community is in such contrast to those in the US that I feel awkward just watching it take place next to me. It excites me that I'm going to be a part of this foreign culture for a month, and I hope that I will be able to learn more and more about what makes this place unique.

Because the theme of my blog is "First Impressions" I thought I would end it by asking the rest of the group the first thought that came into their head when thinking about their homestays:

Vita: The realization about the things you take for granted

Eric: Everyone is super welcoming

The pile of blood is left behind as the villagers carry the freshly slaughtered pig towards the fire. The machete masters move their blade quickly through the pig's belly as they pull out its organs. A few of the women work together to harvest the pig's intestine; it takes three of them in an assembly line formation to hold it up. The woman in the front pulls down a lever to allow water to flow onto the cement ground. Slowly but surely, the three women use their hands to massage the poop inside the intestine onto the ground. The poop and water slide off the pavement and down the hillside where local dogs are waiting to lick up the remnants.

This slaughtering of a pig, which was done in our honor last night, is the perfect metaphor for my state in the first few days here in Thailand. Just like the blood of the pig, my way of living in Seattle has been left behind. My long, hot showers, quiet mornings, bug-free house, and favorite foods are all gone. But, just like the poop in the pig's intestine, all my anxiety, fear, and awkwardness in this trip is working its way out of my system. The first few days here were very difficult, but as I learn a couple more Lahu phrases and become more comfortable with my host family, my stay is becoming more enjoyable. The cold showers are becoming refreshing, and I'm beginning to block out the sounds of crowing roosters and howling dogs at 5am in the morning. The food is superb, especially the ripe mangoes and fresh vegetables.

My host dad is the Chief of the village which leads to my house being the hub of commerce. His wife is very welcoming and sweet as well, and their daughter is one of the sassiest and funniest people I have ever met. I'm pretty tired now after about four hours of wacking bamboo with a machete, so I'll wrap this up. It's not easy to integrate myself into this way of life and to connect or communicate with my host family, but it's getting a little easier every day.

After we got to La Casa Solar we started our first session of Spanish classes, breaking into three groups, reviewing greetings, local slang, and in one group, discussing the cultural difference between Nicaragua and the United States. After a snack we began building solar-powered cell phone chargers, and after lunch we visited La Montana Solar, a co-operative farm associated with el Grupo Fenix, started by community members and practicing sustainable agriculture. Service projects include making insecticide—a natural kind—applying it, planting crops, and harvesting and pounding manure.

Durante la semana antes del viaje—during pre-trip week—our leaders asked us to set a few goals for ourselves on the trip. I feel like I came up with a few mediocre ones: trying all the food, being a vocal leader, and working towards fluency. However, my trip mates, when it was time to share, had much better goals: Sam had the goal of striving towards initiating a connection with his host families, and not waiting for them to do it first. His goal resounded with me because it described a concept I had been mulling over for a while. I have no choice to paraphrase here, but as the Dalai Lama says: you can't wait for the person you're with to be kind to you, you have to be proactive, and your kindness will do the rest.

When cultures mix both sides are deprived of some inferred, common understanding, raising barriers in understanding and therefore bonding. When Sam, my homestay partner, and I first met my host mom, Doña Carmen, there was not much talking. After first introducing ourselves over the welcome dinner we racked our brains to think of some question we could ask: does she have a solar oven? How many kids did she have? Inspired by the bottle of Tío Pepe hot sauce, I asked "Le gusta la comida caliente?" Do you like hot food? Doña looked confused, "Si, me gusta." It was only later I realized that caliente meant temperature hot. Picante means spicy. But we kept trying. Sam had some success, but especially when I talked, Doña and the others in her house looked confused at times, like when I said buenas noches, a greeting, twice when both times I thought we were going to bed. The only problem was that in this part of the world the sun sets really early, and I was going to bed at six o'clock. I was a little embarrassed, but I had to keep trying.

Felix experienced something similar. In the beginning he endured protracted, awkward silences sitting in the living room with his host parents. He stayed out there though, and he and his parents steadily got more comfortable conversing, until they could sustain a continued dialogue.

On the second day of the homestay I gave my host cousin, Irlesca, a stuffed toucan and bouncy ball. Apparently there aren't many toys in our village. The other toy she played with was a muneca, a stuffed doll which she shared with an amiga in a nearby house. I asked her the names of the parts of the bird, and Doña told her the names which she then relayed sheepishly to me, and minutes later Sam and I were being shown Irlesca's family photo album. Then Sam asked if we could make their family tree, fanning the dialogue.

It can be daunting to risk looking foolish, but we all are the same, we want the same things, we fear the same things. The only thing we have between us is a lack of total communication. And the only way of overcoming is by failing, over and over, to cross over the barrier, until we realize it never existed.