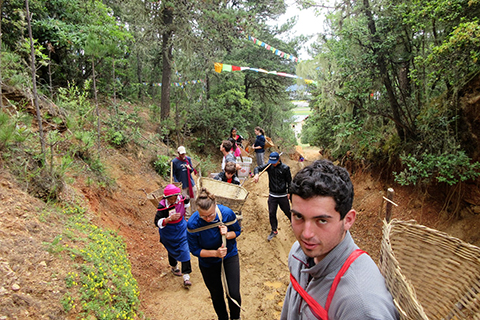 GSL China: The lost horizon
Share to FacebookShare to TwitterShare to Google+Share to LinkedInShare to PinterestShare to EmailPrint this page

My aim is not romanticism. On the contrary, it is pure statement of fact, but I find difficulty setting down my descriptions in any other tone. This is not the place for cold figures and unembellished reality.

The old town is a maze of narrow roadways and malnourished pets. Color swarms from the cramped recesses of musty stores, all selling grossly overpriced goods. The largest prayer wheel on earth, a behemoth of gold plate, rises triumphantly above low ceilings. Crushed cigarettes in murky gutters, rotten wood to cover them. As in any city, Shangri-La exudes both beauty and repulsion in equal parts. It is as much an earthly paradise as Seattle.

Twelve miles away, twenty kilometers – a small village. Two hundred and fifty residents, fourteen tourists, eleven of them high school students. Each house: a masterpiece worthy of Donatello, replete with intricate carvings – dragons, flowers, Buddhist motifs. A courtyard. Bedrooms on the lower level, a kitchen to match. Mount the stair to the second floor and you will have entered a solid block of wood, sculpted laboriously from within, every surface a novel design. Not a spot of paint. Simply complex, raw yet meticulously calculated.

The family radiates warmth. Its grandmother is young and lighthearted in every way but the physical; the stray wrinkle, the grey sheen of hair to betray her age. Her step is not quick but methodical, unrelenting and powerful. A concrete wall poses no obstacle. Each village has its protector, one deity among tens of thousands to ward off demonic influences. Ours, they say, lives atop the hillside, its humble home marked with prayer flags and standing stones. Does the grandmother truly need protection? She could likely hold her own.

A trip leader recently stated that she felt "old and broken" after a day's work in the field. To that I say, one must break the earth before a crop begins to grow.