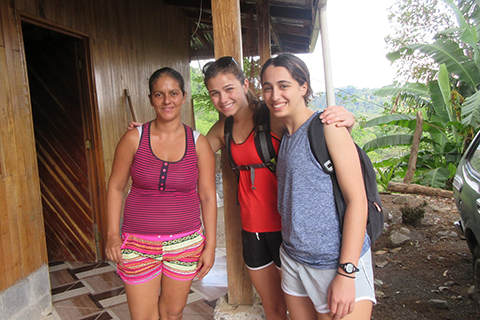 GSL Costa Rica: Comfort zones
Share to FacebookShare to TwitterShare to Google+Share to LinkedInShare to PinterestShare to EmailPrint this page

It all started with a scream. It was our first night here, preceding introductions to our homestays, hence the girls and boys were separated into different rooms of what is known as the bunkhouse at the ranch. After a long day of traveling, touring, and acclimating, we were all ready for a wholesome night’s sleep amidst the soothing sounds of the jungle. But that is not what the jungle had planned for us.

Some were already in bed. Some were engaged in a pickup round of hearts. I, personally, was brushing my teeth. I am sure that readers in Seattle felt a small vibration, an echo of the scream that pierced the humid air of the La Congreja national park and woke up the greater population of Costa Rica. I ditched my toothbrush to find a few girls huddled a safe distance away from Ali’s bed, staring intently at her pillow. “A COCKROACH!” the scream continued to emanate from the girls.

I turned on my heels without even giving the bug a glance and moved onto flossing. Commotion continued outside the bathroom door, but I disregarded it as unnecessary dramatics over just an insect. I could not have been more wrong.

After deeming my teeth sufficiently clean, I walked out of the bathroom and into a different world. The whole group was now fixated on the bug, taking cover on the tops of bunk beds and using notebooks as shields from the roach. And that’s when I got my first look at the thing. “Oh my God,” the words escaped my mouth before I even had the chance to think. Best described by Thomas after the fiasco, this bug was a “monster from our nightmares.” Its length spanned the size of an average human hand (which, in hindsight, is admittedly around 1/70th of the area of an actual human body) and had an eerie verdant glow, covered with brown spots.

Michiko, who had thus far been the group’s exterminator, was front and center, armed with bags around her hands and a shoe at her disposal. We chanted for her, gasping and shouting as she made brave strides towards bagging the bug, but every time she got close, it found a new pillow or sheet to take cover under.

The group was becoming desperate. Greta, who was probably wondering who or what was dying due to the sound of the turmoil, took the hike up to the bunkhouse and reminded us that other humans abided on the ranch. Our voices quieted down, but the fear in our hearts only intensified.

Suddenly, the unthinkable happened. Sylvie, who had previously taken place on the sidelines with me, snatched a Ziploc and lurched at the bug, which was now resting happily atop of Ali’s suitcase.  Right before my eyes, she bagged the bug, strode calmly toward the door, and returned the roach to the jungle, where it belonged. And she still stands to tell the story.

This act was the first of many moments of heroics that I have seen this group commit, and most importantly, I have learned, are not heroic at all. Learning to step out of our comfort zones (of which mine is far too comfortable to begin) is an essential part of any global experience. It all entails growth and strength of character; imbuing oneself in mud for earthen building, taking a bite of an unidentified salsa, and bagging the biggest bug.