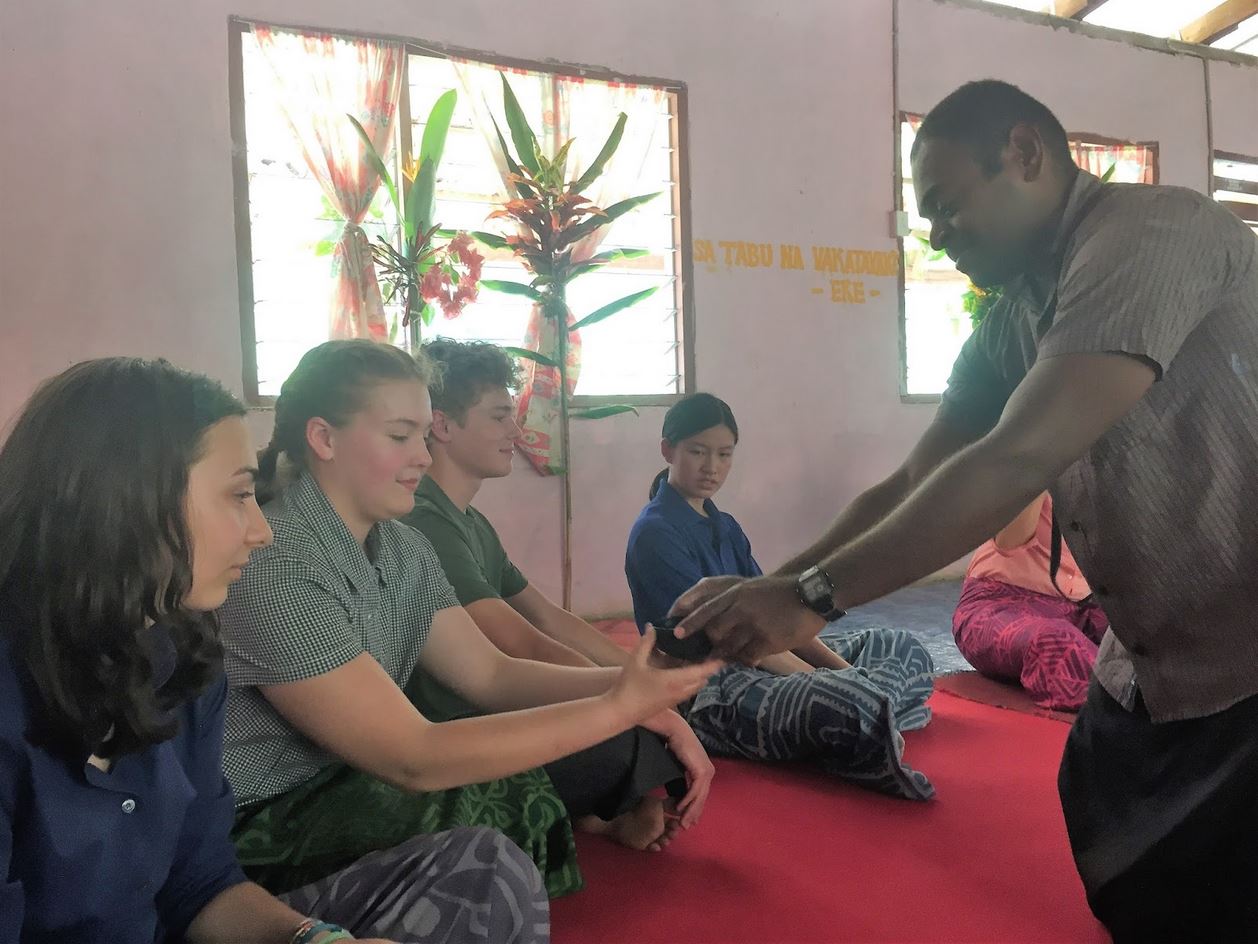 GSL Fiji: Sevu sevu welcome ceremony
Share to FacebookShare to TwitterShare to LinkedInShare to PinterestShare to EmailPrint this page
Jun 29 2017

I kick my flip-flops off at the front door of the communal hall and follow my peers inside. Silently I join the line of Lakesiders at the end of the room. The men and women of the village have already begun to gather and they sit facing us. The women are on our left, watching and whispering, and the men sit on the right. One man in a blue bula (tropical print) shirt and pocket sulu drags a huge wooden bowl to the center of the room. A few others sit around him and stir something in the bowl. Everyone in the room sits cross-legged. The women are in chambas, brightly colored tops and matching ankle length skirts. The men are mostly in bula shirts and pocket sulus. I tug my purple sulu down over my shins. I'm too nervous to wish we had changed into the chambas we bought in town before driving to the village.

The sevu sevu, or welcoming ceremony, begins with a lot of talking. It's mostly in Fijian so I stare earnestly and try to nod if I see my leaders nod in my periphery. Two Fijian men speak. I know the second man is the headman, or spokesperson for the chief, because he introduces himself in English. Tom had told us that in Fiji you make a thombo, a hollow clap, three times as a sign of respect. After each man speaks groups of the Fijians break into thombos, mostly the men. I'm glad I know what the thombos are but I have no idea when to thombo or how many times, so I end up not making a thombo at all. After their speech and the thombos, the men are given cups drawn out of the wooden bowl. I assume correctly that it is kava (yaqona). They thombo before, drained the cup, and then they and the crowd thombo. Tom spoke third, also solemnly chugged a cup of kava, and thomboed at cues I still didn't recognize. There was more talking, more thomboing, more cups of kava among the leading Fijians. Then, a man draws a cup of kava and this time approaches Ryan. Just as Tom taught us she thombos before taking the cup, and thanks him saying, "vina du". All the women laugh. She drinks and thombos three times more times. More laughter. Now the men came down the line slowly, silently offering each of us a cup of kava. The women laugh each time, but I think we follow protocol alright. Then we eat.

Outside the community hall women had prepared lunch for us. I can't remember what any of it was. We came outside to fill up our plates then file back into our seated line at the head of the room. Meanwhile, the Fijians started singing. I don't know what they are saying, but their voices and the many harmonies are beautiful. After a few bites I put my fork down to watch them sing. I swayed. I wanted to get up and dance. I felt close to the music, but I wanted to be part of the music. It reminded me of my church and before I knew I had thought that I began to cry. I did not understand what was happening; I was swaying to the music with a huge grin split across my face and tears rolling down my cheeks. I thought it would stop, but I kept crying. I looked at the floor to hide my face until I thought I had myself under control. Then I looked back at the singing women, and started to cry again.

I think our arrival and sitting through the sevu sevu was more stressful than I knew. And to have this reminder of the place I feel most at home made everything come rushing out. I wondered at the time if they were 'happy tears', but I think they were just a symptom of relief. Our transition to Fiji has been taxing. During those first two days no one got enough sleep; we were dealing with strange food, strange customs, strange language, and strange people. As I sat there sniffling, grinning, eating, and looking at the members of our host families I felt safe where I had not expected to.