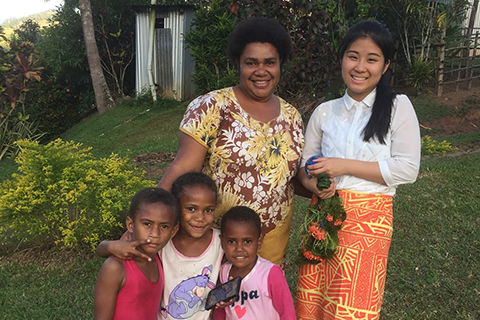 GSL Fiji: What I learned from the Nalotawa School
Share to FacebookShare to TwitterShare to LinkedInShare to PinterestShare to EmailPrint this page
Jul 19 2017

Before coming to Fiji, I didn't even expect that our service would be so deeply tied to the school. When I found this out, I was very excited (because I love children), but also a little apprehensive (because children are impressionable and I might not be the greatest influence). I knew I wanted to make a positive impact on these kids.

What I didn't anticipate was how much these younger kids and the school would be able to teach me. The first thing I learned is that kids don't need to be sheltered that much. Some of the various slightly dangerous things I saw included: boys jumping on mattresses while on top of a roof, preteens walking around casually wielding machetes, and very young kids climbing very tall coconut trees. It makes me wonder if the way many American kids are raised -- in a safe bubble -- is necessary. All the Fijian kids seem just as able, if not more able to handle themselves. When they fall or have an accident, they rarely cry. Instead, they choose to just stand up, walk it off, and keep playing or working. Perhaps giving kids more independence builds resilience and resourcefulness.

The second thing I learned is that our education system needs to provide more flexibility. In the US, it's not as common for kids to get held back. It definitely doesn't happen as much as it should. In fact, even after attending nine years of public education, I can only remember three specific incidents of kids getting held back. At this school, the head boy was held back at least a grade and many kids repeat kindergarten. Most of the time, it seems like kids are only allowed to move on to the next grade when they're ready to. It also doesn't seem like there is as much of a stigma around repeating grades as there is in the US. This indicates that maybe there is more of a recognition that every kids develops differently than others. Some might need more time than others and that's alright.

The last thing I learned was resourcefulness. At the school social night, all the decorations were sourced from the natural environment and made by the kids themselves. In addition, all the kids were able to use the water bottles we gave them to make watering easier. Many of the things that we might perceive as trash were instead taken by them and used for different purposes. An old cooking oil container was cut in half and used as a wagon to store water bottles to make watering more efficient. Back home, I think it's a valuable asset to think outside the box and reuse more of our things. In conclusion, the Nalotawa District School showed me many new ways of interpreting values and society.