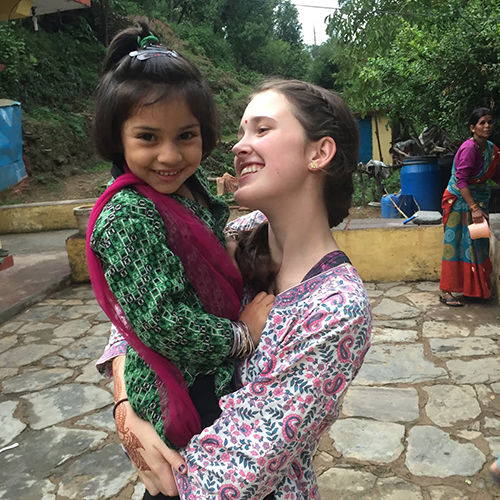 GSL India: 10 minutes
Share to FacebookShare to TwitterShare to LinkedInShare to PinterestShare to EmailPrint this page
Jul 14 2016

By 7:30pm it has already begun to grow dark; the mountains block the setting sun, illuminating the sky in a pale pink glow. In another hour, night will have fallen. I am sitting outside in a green plastic chair with my feet up on the low stone ledge in front of me, looking out over the valleys and hills below. For the next 10 minutes I sit there, letting things happen as they naturally would, and observing. I have thoroughly doused myself in bugspray, but that doesn't stop the daring mosquitoes from coming too close to me. In the background I can hear my host cousins and Madeline, and my little sister, Shrishe, talking to her mom. The birds are just beginning to relinquish their air time to the crickets, who remain silent during the day but make up for it at night.

Within 20 seconds of sitting down in the green plastic chair Shrishe comes running out to me. She is only 5, and doesn't yet understand that I do not speak the same language as her. She looks up at me with her big brown eyes and half pony tail that is right on top of her head (whenever she moves it looks like a palm tree blowing in the wind) and starts talking to me. I have given up attempting to explain to her that I don't understand, so I just kind of nod along and say "thik hai" (it means "okay" in English) until she seems satisfied. Next thing I know she is pulling on my hair and trying to make it look like hers. The only thing that keeps me from stopping her is that it gives me time to look up at the moon.

For the past few nights the moon has been riding low in the sky, slowly growing bigger, but it is still in the DreamWorks Animation phase. As my hair is being pulled from my scalp, I am able to take solace in the brightness of the moon and the lone star that shines nearby. Thin wisps of clouds move across the dusky sky, but as the seconds pass they become harder to see as night settles in.

By now my mother, Basanti, has joined us. She too has noticed the moon and points it out to me. I smile and say "beautiful," one of the limited amount of words which we both understand. She saw the look on my face when Shrishe suddenly pulled my hair and told her to stop. Shrishe gave one more pull for good measure, and then promptly climbed into my lap. My mother left soon afterwards, followed by Shrishe who realized that I was paying more attention to the view than to her.

For the next four minutes I sit by myself, unmoving, silent, and in utter peace. There wasn't a cell phone to distract me, no TV to go watch, and nothing to stress over. The simplicity of just sitting and being was overwhelming. There have been rare and few moments in my life when I have not felt any worries or stress, and this was one of them. Even in the summer when there is no homework, I am never entirely at peace. Tonight I was.

My house overlooks the valleys, the hills, and the terraces. When I first sat down only a few lights could be seen in the valley, and the hills were still visible. Now as I watch, more and more lights flicker to life. By the time it is fully dark lights will light up the valley floors. The hills and terraces become as black as a water buffalo, but they are outlined by the lights that twinkle below. It is an incredible example of how powerful the negative in a space can be. I am able to see the lights miles into the distance, and still know exactly where the hills are, even though I cannot see them.

As I spend my last 30 seconds in the green plastic chair I notice that the birds have gone silent. The crickets – accompanied by frogs – have taken center stage. The sun has fully set behind the mountains, and my 10 minutes are over.