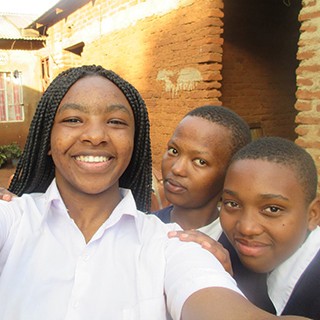 GSL Tanzania: The Chin and the Heart
Share to FacebookShare to TwitterShare to LinkedInShare to PinterestShare to EmailPrint this page
Jul 12 2018

We sat for hours, going back and forth between the two of us, telling stories and giggling between sentences. I would tell my sister a story about a singing cricket and then she would tell me about a daring princess who loved going on adventures with all of her siblings. Then, my sister told me a story that will be my favorite of the entire bunch for a long time. It was the story of the Chin and the Heart:

For a long time, the Chin and the Heart were the best of friends; they would do everything together. They would sing and dance and play and cry. Out of everyone, they loved each other the most and could not bear to be apart. When they walked to the market, they were together; when they played outside, they were holding hands; day and night they were together, always. One day, the Brain found the Heart and whispered something into her ear, convincing the Heart that the Chin had previously come to the Brain and told a horrible, untrue secret about his very best friend. The Heart became angry and went to confront the Chin about what he had said. The Chin denied the accusation and tried to embrace the Heart in a hug. However, the Heart did not accept the Chin’s apology and ran far away to be by herself. Soon she came across a young man whose arms and mouth were stretched out in a big yawn. The Heart leaped into the mouth of the young man and hid herself away from the Chin within the man’s chest. The Chin looked far and wide for the Heart. When he finally came across the young man whose mouth had already been closed, he understood that the Heart was concealed inside. So, the Chin decided he would wait for the Heart to come out of her hiding place. He placed himself on the base of the man’s face, so that he would be prepared when the Heart finally would come out. As a result, the Chin and the Heart sit where they are today on us humans.

This story of the Chin and the Heart actually reminds me a lot of the relationship between wealth and people around the world. Specifically, in the way that people tend to chase the idea of wealth, in search of money and belongings. Commonly, happiness is mistaken for how big your house is or how many diamond rings you own, but I’ve learned that wealth doesn’t just refer to all of material things you can buy with money. For example, today we went to an Orphanage in Rhotia Valley to visit the children and see a model of sustainable life. There we met a German woman named Doris, who had recently moved from Los Angeles to Tanzania and worked at the orphanage. Doris said that she felt burnt out with her time in Los Angeles and wanted to find a new purpose for her life in Tanzania, using her skills as a social worker. She found that, unlike America, where most children are stuck behind phones or computer screens, most of the kids in Tanzania worked for themselves by washing all of their clothes by hand or cooking all of their meals on their own. So, for Doris the definition of wealth was different because she believed that all of the children in the orphanage and around Tanzania were wealthy in their own way; through love and a cheerfulness, many of the Tanzanian children find happiness in ways that tons of kids in America wouldn’t even recognize. I don’t think Doris was trying to say that no one in America can be happy, but I definitely agree with her points and think that she brought up an interesting question: how can we define happiness around the world, and if we do find a definition, will it ever be able to be achieved by everyone?