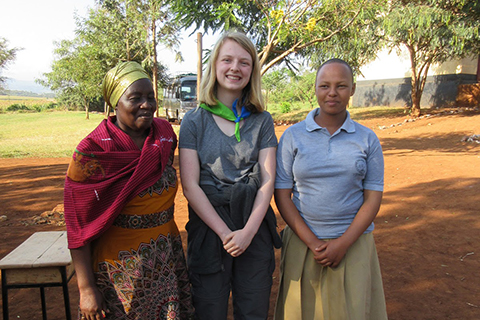 GSL Tanzania: Women in Tanzania
Share to FacebookShare to TwitterShare to LinkedInShare to PinterestShare to EmailPrint this page
Jul 13 2017

As long as I can remember, I've looked up to women in power, in particular those who used said power well. Unfortunately, the path to that power is rarely easy for women, even in the United States. The belief that women are unstable is still very present in society, despite its dated nature. So, when I came to Tanzania, I was pleasantly surprised to find that women in power were actually quite common.

According to Sarah, though Tanzania has never had a female president, their current vice president is female, and faced little to no discrimination due to her gender while running. Having a female VP alone is better than the United States can claim, let alone that the discrimination she faced was minimal.

But the respect for women in power isn't only big scale. For my community interview, I met the district commissioner of Karatu District (which, I learned, includes much more than just the town of Karatu). She was also a woman, one again in a significant position of power, albeit on a slightly more local scale than the Vice President of the whole country. Again, a woman in a position of significant power who is respected and treated exactly how any other holder of that power would be treated.

Tanzanians' respect for women goes way back. The Hadza, one of the last hunter-gatherer tribes in the world and the group we stayed with during the retreat, are commonly considered a group that most closely resembles the lifestyle all humans lived in the beginning. And in their society, gender equality is a given. With the women gathering tubers, a much more reliable source of food than the meat the men hunt, both sexes are acknowledged as equally important in the tribe. If a husbands mistreats his wife, she can easily pack up, take her children and move to another Hadza camp, which will be happy to welcome her and the skills she brings. And thanks to the Hadza sharing nature, the rest of the community will ensure that she has the meat she needs as well. With Tanzania formed from tribes such as the Hadza, it's easy to see where their respect for women in power comes from.

Now, of course, Tanzania is not perfect when it comes to gender equality. Sarah (my host sister) tells me that if a young woman who is still in school becomes pregnant, she is forced to leave the school and the village, sacrificing her future, while the father remains in the village to continue school, undamaged.

All in all, much like in the United States, gender equality in Tanzania is a complicated issue. It is far ahead of its time in some areas and still unequal in others. However, their respect for women in positions of power is impressive and admirable, and it has reminded me again just how much the United States can learn from Tanzania.