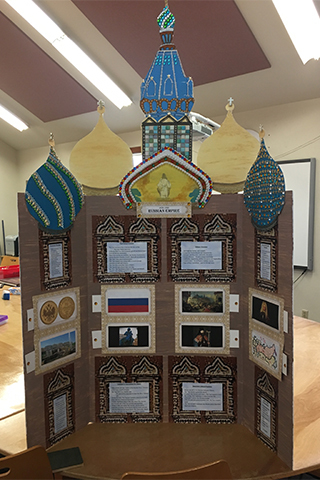 H100 World Trade Fair: How can we honor early modern civilizations in our history class?
Share to FacebookShare to TwitterShare to LinkedInShare to PinterestShare to EmailPrint this page
Mar 1 2017

The Trade Fair
The Trade Fair is a small part of what our History class is calling the Diplomacy Challenge, in which partners are given an empire to represent and research on. Options included the Ottomans, Ming, Russians, English, Spanish, Mughals, West Africans, Powhatans, and the Aztecs. All our empires were to participate in a trade fair where we would present some of our history and knowledge to other civilizations. The point of all of this was to then find another empire in the class and make a treaty with them. Each empire was set in their own time period based on when our assigned leaders lived. My partner and I were assigned to represent Russia. We were the most recent empire in this project and the largest. Our Emperor was Peter the Great (1672-1725) who was a lover of ship building. Russia at the time was modeled very closely to Europe.

The Empires from Ancient History
While Russia valued its navy and religion, it was different for every other civilization. During the trade fair, each group had to listen to what each culture valued, like religion, art, social structure, and military. The idea went both ways. My partner and I needed to make sure Russia was positively represented to attract any alliances. To add to all of that, some of the empires for the Trade Fair were enemies. The Spanish and the English were warring with each other at the time. In addition, how do you think the Powhatans felt facing their European conquerors? Well, the answer is that nothing happened, and not in the boring sense. Everyone's posters were filled to the brim with unique and important information regarding their empire. I think part of the project was also to bring to an understanding that some civilization had very little recorded history which made it harder for student research. Places like England and Russia had loads upon loads of details on practically any topic you could think of, from fashion in the seventeenth century, to Peter the Great's fetish with wood. Other civilizations had a hard time even finding information on foods for their empire to bring to the Trade Fair.

The Significance
What made the fair special was the fact that, despite some disadvantages, everyone gave a great presentation with flamboyant and interesting costumes and food. Every poster board was decked out from head to toe in the art and design of that specific culture. Seeing each presentation brought together in one room was spectacular. I don't think it was until the very end of the class, after all the presenting, that it was realized that we needed to talk about the elephant in the room: How did it feel to act on behalf of a civilization that was either conquered or a conqueror to other empires in the room? This led to a discussion bringing up the issue of whether we and other historians were representing these cultures correctly.

The Delicacy of the Topic and the Lesson
Throughout this project, there were lots of ways to be incredibly offensive. Costumes could have been too over the top and could have been seen as poking fun at cultures. Bringing in any Hispanic food under the sun for the Spanish Empire would not have made any sense considering what dietary resources they had at the time. Plus, outwardly commenting on how your own empire killed others, could have been seen as aggressive. I'm really proud to say my class did none of this and worked hard to make sure their empire was not just represented, but truly put their civilization's best foot forward in the hopes of gaining a treaty with another empire. My fellow classmates and I left the class with a new understanding for past cultures and a higher sense of awareness about World History.