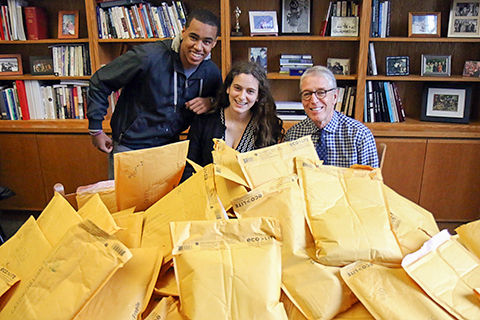 At the beginning of the school year, six of my classmates and I proposed a radical idea to the administration: a day without cell phones. We felt that phones were omnipresent in our social interactions, academic environments, and daily life. Lunchroom conversations take place between Snapchats, and even classroom tables vibrate with frequent text notifications. Teenagers today (i.e. my generation of millennials) have grown up in a world where cell phones are not a luxury but a necessity. The phones stay tightly with us in class, in bed, and even in the bathroom. Cell phones are tied to our lives, our bodies, and our hearts.

I did a little bit of research about mobile phones and found that 65% of teenagers acknowledge being addicted to their cell phones. I wondered how Lakesiders fit into the statistic. How would Lakesiders fare without their cell phones for a day? Would students be willing to give phones up? Would the Lakeside campus feel any different without the presence of cellphones?

So on January 19th, students who chose to participate met their advisors to hand in their phones for one school day. We collected 514 student cell phones and got 38 advisories to fully participate! In other words, 94% of the student body participated! Poor Mr. Noe, who had to listen to the endless chirping, vibrating, and ringing from the phones that were safely collected in his office all day long!

So how did the day go for the student body? Some students didn't notice a difference, while others were most frustrated with the lack of immediate access to a clock, stock updates, or Google. Multiple students reported feeling unbalanced by the lack of weight in their right pocket, and one senior felt so anxious about not having his phone to hold throughout the day, that the student brought a bar of soap to simulate the feeling of carrying a phone. Some students were so opposed to the idea of giving up their phones (while still wanting to reap the benefits of the pizza incentive) that they brought multiple phones to school and only turned in one.

While the majority of students reported that it was difficult to go without their phones for the day, a lot of students were also surprised by the positive differences in social interactions of going "phone free."

One student reported, "Although I felt naked without my phone, like I was missing something, I had a lot more quality conversations." Many others reported that they had more quality social interactions. Another said "I was waiting for my meeting with my college counselor and actually had to talk to the front desk person instead of sitting on my phone." And another said, "I was in the library and had nothing to do and reached for my phone. I realized it wasn't there so instead I had a conversation with some people I don't normally talk to." A freshman said, "At lunch, instead of playing Clash Royale I walked and talked with my friends." While a few students weren't pleased to have to interact with other students (one student said, "At lunch, I had to talk to people... No escape mechanism."), the majority of Lakesiders seemed pleased and liberated to take time off to be with their friends in the real world.

I asked a few of my friends at lunch what they took away from the day. "I realized how much more students socialize when they don't have their phones, during lunches, frees, and even just walking down the hallway," said one junior. "I'll remember how liberating it felt to not always pull out my phone when I felt awkward around people I didn't know, and instead being forced to talk to people around me. Lunch was a very cool experience without phones," said another student. "I realized that I might be super addicted to my phone," said one student, guiltily. A freshman reflected, "I learned that I can spend 5 minutes with my mind and I won't die."

One of my favorite responses to the day came from a freshman girl. She said, "Today, I actually looked up and saw the sky." I'm still not sure if Lakesiders fit into the statistic that most teenagers are addicted to their phones but it is clear that we are deeply connected to these devices as resources for information, social escape mechanisms, and distractions from reality. It certainly was refreshing to put the vibrating, chirping, and ringing devices away for the day so that we could stop, strike up a conversation with someone, and look up at the sky.
Powered by Finalsite