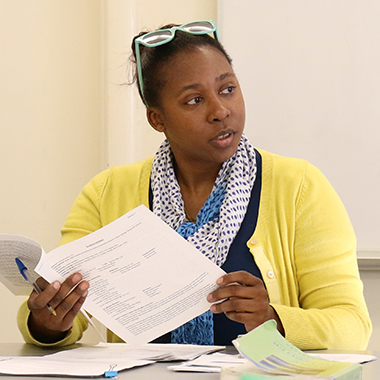 In African-American Lit, exploring implicit bias
Share to FacebookShare to TwitterShare to LinkedInShare to PinterestShare to EmailPrint this page
Oct 20 2016

At the first 2016 presidential debate, Lester Holt asked Secretary Clinton whether she "believed that police are implicitly biased against black people." Clinton responded by saying, "Implicit bias is a problem for everyone, not just police." As a person watching the debate, I wanted to immediately disagree with Secretary Clinton. I'd like to think of myself as someone who is open to others and doesn't have preconceived notions about any other racial, ethnic, age, etc. group. But, as a teacher of the African-American Literature class at Lakeside, I am well aware that I have implicit biases. And so does each person reading this post.

The Kirwan Institute for the Study of Race and Ethnicity defines implicit bias as "attitudes or stereotypes that affect our understanding, actions, and decisions in an unconscious manner." The "unconscious manner" piece of the definition is what is most difficult to reconcile. When I give the African-American Lit students the Implicit Association Test, run out of Harvard University's Project Implicit, in a few weeks, I have no doubt that they will all go into it believing that they have no racial biases. If they did they wouldn't have signed up for the class, right? And yet, I know that for the majority of them – maybe all of them – the data will tell another story.

So, what does all of this mean? Does it mean we are bundles of biases, walking the Seattle streets? Does it mean we are secretly bad people? The short answer is no. The longer answer is also no, if we can acknowledge the fact that we do have these implicit biases, and work to dismantle them. Implicit bias is something that is accrued over the course of your lifetime. It is built through the direct and indirect messages we receive from parents/guardians, friends, teachers, coaches, the list goes on. Media plays an especially big part in shaping our implicit biases.

Many people can find that their implicit biases don't align with their declared beliefs. Not all implicit bias rises to the level of some white police officers implicitly believing that young, African-American men are more dangerous than any other group. Being surprised that a person under the age of eighteen is the founder of a thriving company reveals the bias that only with age comes the wisdom to run a business well. Implicit bias is behind the gender wage gap; people with ethnic sounding names being hired less frequently than their peers with more Anglo-Saxon names; looking away from homeless people on the street; and why the Olympic swimmer Simone Manuel's win was so newsworthy. All of these incidents tap into feelings and attitudes that have been subconsciously cultivated over years, decades.

The good thing is that implicit bias is malleable. In the same way that we can approach learning math from a growth mindset (the idea that abilities can be developed through hard work and dedication), we can approach unlearning biases in the same way. The first step is to acknowledge that you have implicit biases. Then, the next time you find yourself voicing surprise that half the multivariable class is made up of young women, or wanting to cross the street when a kid with a hoodie is walking toward you, check your response: is it based in fact or experience? Or is it a notion that can't be traced?

Part of what we discuss in the African-American Lit class is the fact that having implicit bias doesn't make you a bad person. It makes you human. At the beginning of the year I tell the students that we'll use two different lenses to examine literature. We start in "the head," with intellectual discussions about issues like microaggression and stereotype threat. Taking the Implicit Association Test is part of this, as it is a great mechanism for them to take an objective, intellectual test about racial bias. We then move to a more vulnerable place, "the heart," using what we've learned to be able to have tough, complex discussions about the literature, in a way that will hit closer to home for many of them.