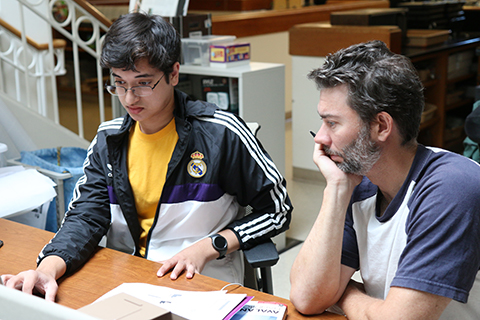 LSRI: Using SNOWPACK to forecast avalanches in the Pacific Northwest
Share to FacebookShare to TwitterShare to LinkedInShare to PinterestShare to EmailPrint this page
Jul 24 2018

The primary method for forecasting avalanche danger in the Northwestern United States relies on weather forecasts and human-made, in-the-snow observations. While current avalanche forecasts are fairly accurate, they could be made more reliable through use of an effective, computer-based model of the snow itself. I attempted to evaluate an exceptionally detailed Swiss model called SNOWPACK as a forecasting tool in the Northwest. This involved unpacking the model’s inner workings, before using it to analyze snowfall on Mount Rainier and then gauging its accuracy based on archived reports from the Northwest Avalanche Center (NWAC).

The model itself is highly complex and requires three separate programs along with two precisely formatted input files to produce an interpretable output (Figure 1). It takes weather and initial snow data for the location being analyzed and determines snow temperature, snow grain type, density, viscosity, and liquid water content. Eventually, I ran SNOWPACK using archived NWAC weather data from Paradise on Mount Rainier for the 2017-18 avalanche season. Once I had gained a good understanding of how to interpret SNOWPACK’s output, I checked it against archived avalanche forecasts, to see if SNOWPACK would be useful in predicting avalanche danger. Impressively, I found that for every day listed in the NWAC reports as having a high or extreme avalanche danger, the snow layers described in the reports matched the layers shown in the SNOWPACK outputs almost perfectly. 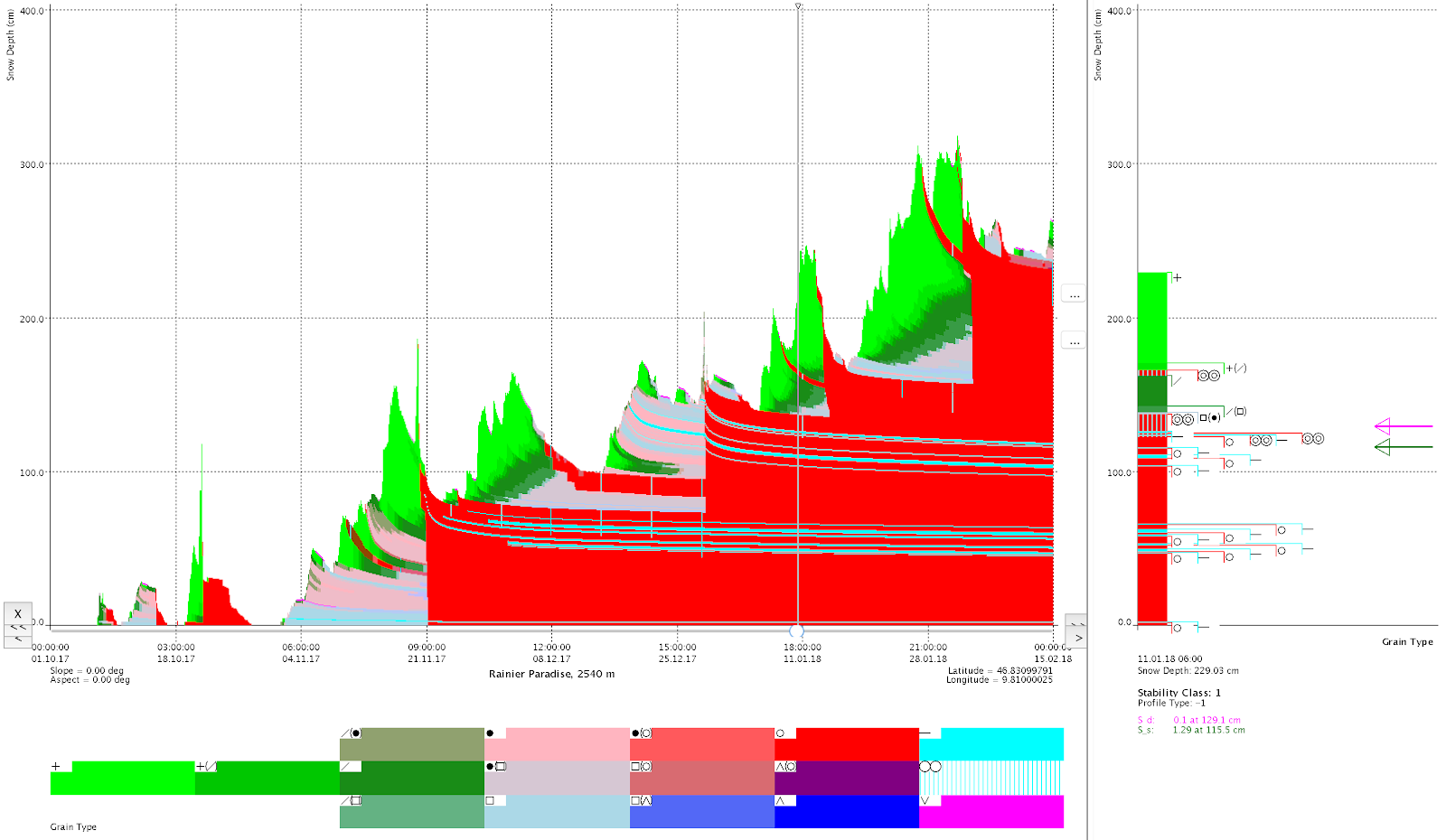 Following is an example of a visualized SNOWPACK output coupled with an NWAC avalanche danger report:

These figures give us information about the snow being analyzed. The diagram on the left shows the height of the snowpack over time (Jan. 7-15), with the colors representing types of snow. The diagram on the right (just Jan. 11) gives us highly detailed information on the layers seen in the snowpack. Each of the symbols seen next to the layers corresponds with a specific type of snow - they require an International Commission on Snow and Ice (ICSI) classification table to be interpreted. In the diagram on the left, we see large amounts of new snow (green) falling over the course of several hours on Jan. 11. According to the diagram on the right, this snow is constituted of lots of dendritic (star-like) crystals which will bond cohesively to each other because uniform dendritic snow tends to interlock and stabilize rapidly. However, the red layer directly below the newly fallen snow is a melt-freeze crust formed by melting snow that refreezes. Because of the structural differences between newly fallen snow and refrozen water, the bonds that hold the melt-freeze crust and the newly fallen snow together are likely to be very weak. This situation – a large, newly formed, cohesive layer of snow, directly above a crust that is unlikely to bond well with it – is a recipe for disaster and a marker of a possible slab avalanche.

Slab avalanches are by far the most dangerous types of avalanches and they’re caused by large slabs of cohesive snow separating from the layers below them. Slab avalanche danger areas can seem completely calm, but as soon as the threshold amount of snow is reached, or a skier causes the slab to disconnect, they can be massively destructive.

In the situation seen above, I would expect to see an avalanche warning Jan. 11 with the NWAC report discussing a large amount of newly fallen, cohesive snow situated directly over a melt crust. And when we go take a look at NWAC report for Jan. 11 ...

The danger rating is high everywhere. And the report itself warns that “following a brief warm-up on Tuesday, an additional 10-12" of snow was seen in many areas near treeline from Snoqualmie Pass northward, with lesser amounts to the south (e.g., 1-3" in Rainier/Crystal/White Pass area). The snowpack is generally right-side up, but is showing reactive storm slab formation on a supportable 1/5 and unsupportable 1/9 crusts in some locations.”

The “warm-up on Tuesday” is likely what causes the snow to melt and it freezes when things cool down. The “10-12” inches of snow is seen clearly in the SNOWPACK diagram along with the “unsupportable 1/9 crusts” directly below. After entering the weather data for the 2017-18 winter season into the model, we are given a near-perfect analysis of the snowpack layers Jan. 11

This near-perfect layer prediction is not an isolated incident. I found SNOWPACK to be just as accurate on every day with a high or extreme avalanche danger rating. These findings demonstrate that, if used correctly and in conjunction with on-site snow evaluations, SNOWPACK could be an effective tool used to amplify the accuracy and reliability of avalanche danger evaluations in the Pacific Northwest.