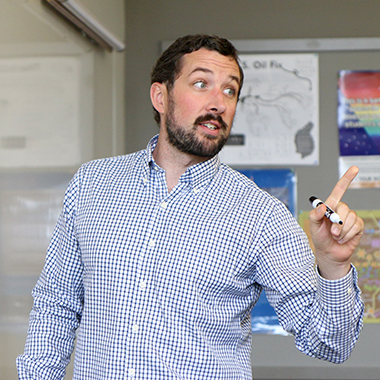 The following was originally published in the Fall 2020 Lakeside magazine. Mathematics of Democracy is an interdisciplinary elective open to 11th and 12th grade students.

So, you’ve decided you want to set up a democracy — outstanding! We have just a few questions: How often do you want to run elections? Who should get elected and how? How do you plan to quantify the will of the people? How popular should a candidate be to gain office? How will you combat the tyranny of the majority? Should candidates who fail to win a majority enter a run-off election? (Bear in mind that a run-off might bar the election of Jesse “The Body” Ventura, but it would likely also sink the candidacy of Abraham Lincoln.)

Mathematics of Democracy has been co-taught by mathematicians, historians, psychologists, and political scientists in its seven-year lifespan as a Lakeside elective, and it carries the imprint of all of these, examining social choice theory and elections, representation and gerrymandering, polling, and electoral colleges. We’ve launched the course with questions around the appeals of democracy and the fairness of elections, pairing contemporary think pieces from Anne Applebaum and Jill Lepore with the timeless observations of Alexis de Tocqueville’s “Democracy in America” and James Madison’s “Notes on the Debates in the Federal Convention.” It’s especially exciting to be keeping one foot firmly planted in federal and state elections while examining the long-term contexts in which they’re occurring.

One of the major challenges of studying democratic elections lies in quantifying voter behavior and choices. Hodge and Klima’s “The Mathematics of Voting and Elections” has some lessons for us here, as does the work of Kenneth Arrow, John Banzhaf, and Jean-Charles de Borda. If, as Gibbard and Satterthwaite would tell us, no electoral system can meet all of our criteria for fairness in voting, how do we proceed in seeking a system that sacrifices the least?