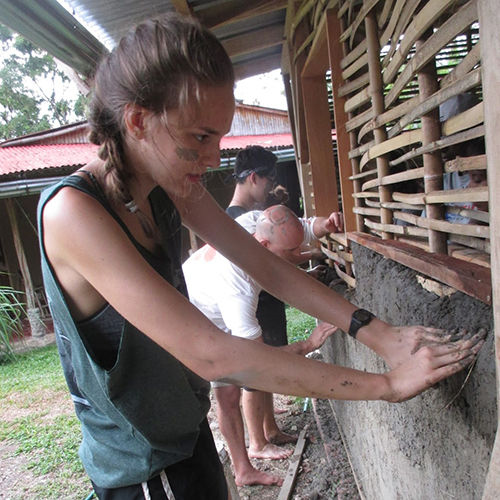 In late March, a group of ten Lakeside students embarked on a three week trip to Mastatal, Costa Rica as part of the Advanced Ecological Studies class. Working closely with Rancho Mastatal, an ecologically sustainable permaculture farm located in the heart of the village, students spent most of the first week in country learning about and working on permaculture, fermentation and food preservation, and natural building.

If everyone had to make their own houses, they would be a lot smaller. I imagine very few people in the US know the materials that go into building their homes, and fewer still would know how to build one themselves. One of the things that Rancho Mastatal teaches the people that come to their doors is how to do natural building. The surprising reality is that most people on the planet actually practice natural building. Using a combination of mud, grass, and often times sand they are able to construct for themselves the basic shelter that all humans need.

A couple days ago, we were introduced to Nick. Nick is the resident natural builder at Mastatal and between Nick and Tim, resident apprentices and visitors learn how to do natural building. For us natural building consisted of three things: Getting clay, mixing batches of sand, straw, and clay, and using a method called waddle and dob, which is just a method of applying the sand-straw-clay mixture to the walls. The building we were working on was a food preservation kitchen.

The grey clay comes from a large bin and is the place where face paint comes from. (See pictures for evidence) From there the clay is mixed with straw and sand on a tarp the old fashioned way, with people's feet. Dancing on the mixture commences and slowly the ingredients become one. The mixture is then put in buckets and given to teams on the wall to continue up the wall. It takes forever. I cannot, also, imagine doing it alone. In two hours, we were only able to get about a foot up the wall.

Natural building is a way of building using the surrounding resources to make buildings that suit a need but also have a low impact on and last in accordance with the environment. It's a really interesting process and one that really makes you appreciate bigger homes. Without rebar and cement, our houses at home would be nothing. At El Rancho, however, the buildings are beautifully constructed and airy and spacious. The wall that we helped to build has seen our hands, but the building has seen over 200 hands. It's a community effort. Each natural build house has a story of the hands that touched it and made it happen, which is much more than I can say for any of the buildings at home.